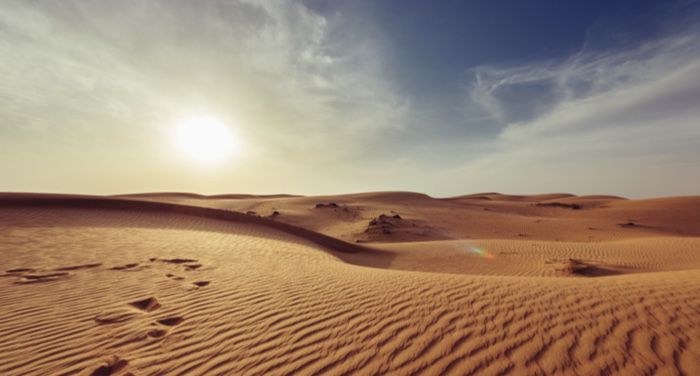 When I first picked up Mark Oshiro’s new book Each of Us a Desert (September 15, 2020), I realized that while I can rattle off the names of many desert fantasy and science fiction stories inspired by the geography and cultures of Africa, Asia, and the Middle East (N.K. Jemisin’s Dreamblood Duology, Saladin Ahmed’s Crescent Moon Kingdoms, Tasha Suri’s Books of Ambha, Sabaa Tahir’s An Ember in the Ashes, Frank Herbert’s Dune, the list goes on and on), the only one I can think of clearly inspired by the Americas is the one I’m holding.

Some poking around yields Trinity Sight by Jennifer Givhan, published in 2019, House of the Scorpion by Nancy Farmer, and The Water Knife by Paolo Bacigalupi. One could make an argument for Stephen King’s The Dark Tower. There are probably more that I hope to discover with further digging, but it’s worth noting that in the case of the former you don’t have to dig at all. Why that should be, I don’t know—although I do have some guesses, mostly to do with the marginalization of Indigenous, Hispanic, and Latinx writers, but that’s a different piece! What I do know is, I’m glad to see this take on a classic theme.

Probably the first desert SFF I was exposed to was Star Wars: A New Hope, closely followed by Robin McKinley’s The Blue Sword and, inevitably, Dune. For Oshiro, who is Latinx, it was Looney Tunes and Disney’s Aladdin.

“So…not a particularly meaningful source of representation or anything,” they shared. “But the first book I read with a prominent desert setting was when I was fourteen. I was blessed that year with a double dose of The House on Mango Street and Bless Me, Ultima, both of which heavily affected my desire to pursue being a writer. Rudolfo Anaya’s book imprinted on me heavily, and I don’t think it’s a stretch to see that influence in the pages of Each of Us A Desert. There was something magical about how he made the fantastical appear in a setting that was deeply familiar to me.”

Shifting sands, the beating hot sun, freezing nights, perilous flora and fauna; it’s a vibrant setting for an adventure, whether of the magical or science fictional variety, and gives rise to a different problem set than that faced by characters in more verdant settings. Forest, schmorest!

“I just plain didn’t see a whole lot of young adult books set in deserts,” Mark said when I asked them about choosing the setting. “I wanted my follow-up to [Anger Is A Gift] to feel more rural, especially because I grew up in a city (Riverside, CA) that had a near-desert climate, but also was so spread out. I grew up next to a wildlife preserve; a bunch of the people I went to school with had farms and livestock. I wanted to create a story set in an environment more like that.”

With that inspiration, Each of Us a Desert imagines an environmentally ravaged landscape peopled by small, far-flung communities called aldeanos organized around a cuentista—a sort of sin-eater and truth-teller, who takes dark secrets from others and gives them to the land before they can manifest into demonic forces. The magical system is intricate, fascinating, and not at all what it seems upon first glance. The heroine Xochitl, the cuentista for her village, has taken for granted the sacrifices she makes for the people around her, until a violent interloper sends her on a journey of discovery. As she starts to peel back the layers and find the truth about herself and her world, we’re right alongside her, delving into the world-building; you can just about feel the sand on your skin, as well as the shock and betrayals that Xochitl experiences.

But creating the specifics of this mythology was no walk in the park, desert or verdant. Oshiro actually set out to write a completely different book.

“[T]he first draft of Desert was originally called El Otro Lado, and it was a distant future dystopia set in the Sonoran Desert. But you didn’t know it was a dystopia at first? It was also: very sad and a huge mess. Through two major rewrites in 2018 (part of the reason why it’s been so long since I released a book), my editor helped me realize that I was writing stuff that would work very well in a secondary world fantasy. That would require a TON of work on my part, and I did not come up with any of the world’s mythology until the second rewrite. But the process allowed me to craft a universe specifically for this character, which was a rewarding process. I always knew that Xochitl would go on a journey to cross a magical desert, so then I started thinking about why she would be isolated. From there, I got the idea for the cuentistas, and the mythology shaped fairly quickly. I added stuff in during edits to strengthen the narrative, but it was one of those rare situations where the setting and the world-building just seemed to fall into place. (That makes it sound like it was easy, IT WAS ABSOLUTELY NOT.)”

While this just makes me want another desert book from Mark (desert dystopia! Yes, please!), as well as making me crave a trip back to my favorite national park, Joshua Tree, I am happy enough to settle for finishing Each of Us a Desert for the time being. I’ll also be keeping my eyes peeled for others in this sub-genre; while I have no problem rereading Empire of Sand and Realm of Ash for the third time (seriously, Tasha Suri is so good), I’ve got a new itch to scratch. Give me the Mojave, the Atacama, La Guajira! Death Valley, anyone? I’ll be over here, filling up my water bottle and looking for shade.

If you too need some hot and heavy (see what I did there) reading, we’ve got options for you! Here’s a round-up of 15 books with heat, and this list of books that will transport you has a couple deserts to pick from.