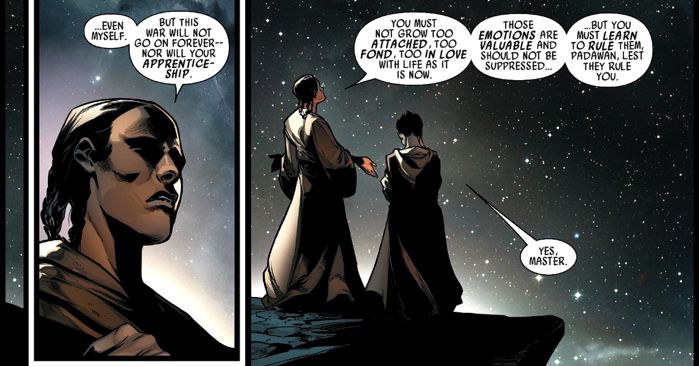 B-list heroes, however, haven’t gotten quite the same bump, and I can think of a few who deserve a little love and air time. Since we’re all fired up for S2 of The Mandalorian, let’s deep dive into the Jedi Archive and get to know…

Cause of Death: Assassinated by her clone battalion during the execution of Order 66.

Master Depa Billaba was, apparently, in the prequel films.

I have absolutely no recollection of this. My introduction to her, insofar as my brain is concerned, is one my personal all time favorite Star Wars comics, Kanan: The Last Padawan. As you can see from the above, she is one of few who can match Sassmaster Kenobi in the power of the Snark and so, of course, I fell in love with her immediately.

When we first meet Master Billaba in The Last Padawan, she has been in the Temple’s infirmary in a bacta tank for six months, healing from injuries sustained during a battle with General Grievous; though she survived, her battalion suffered 90% casualties and rumors had been swirling about the fight and what state Billaba would be in when she awoke from her coma—if she awoke. It wasn’t until youngling Caleb Dume entered her presence that Billaba showed any signs of life, quickly proving herself physically for duty, though her brethren on the council remained concerned about whether or not she was psychologically ready to return to the field.

After resuming her duties at the Temple, Billaba found herself often in the presence of the youngling who had apparently sparked her return to consciousness and was drawn to his habit of questioning procedure and protocol and impressed by his ability to think strategically. (During a lesson where Master Kenobi was showing the younglings a beacon that could be used to call all of the Jedi to the Coruscant Temple in a time of need, Caleb caused great consternation by asking if the same beacon could also be used to warn those same Jedi off, a technique Kenobi would later remember and utilize to save the few remaining Jedi after Anakin’s massacre of the younglings and Palpatine’s coup, including Caleb himself.) She appreciated that when the youngling overheard the Clone Troopers calling the Master “damaged goods,” he came to her directly rather than speculating or gossiping, and when the pair survived an assassination attempt against her that happened to come while they were discussing the matter by working together, she decided to take him on as her Padawan.

Toward the end of the Clone Wars, Billaba went to Kardoa to take command of a battalion led by Commanders Styles and Gray, survivors from her former battalion. Though he’s still young and a Padawan learner, she took Caleb with her (the child soldier thing is neither the least, nor the most problematic thing about the Jedi).

After two battles, neither of which was complete victory, and during which first Caleb and then Billaba were injured, the battalion was sent to Kaller and won a key victory, after which Caleb, Master Bilaba, Styles, and Gray sat around the fire and talked about the Jedi Order and their questions regarding its future. Bilaba gave Caleb a holocron (which, if you watched Rebels, you know Kanan held on to) and told him to use it in the pursuit of understanding the role of “questions” and “peaceful dissent” in the Order. Moments later, Billaba began to have visions of her fellow Jedi dying across the galaxy and grabbed Caleb’s arms, allowing him to share in the visions. Though the warning wasn’t enough to save both of them, it did give Billaba enough time to get into position to stand between Caleb and the clones, which gave him time to recover from his immediate shock and to follow her order to run.

Though first Caleb, and then Kanan, struggled for years with the guilt of having followed his master’s final order, he eventually came to understand that her legacy lived on in and through him. That she would have been proud of the place he chose in the Rebellion and on the Ghost’s crew. Of the way he questioned and dissented and found love with Hera. Of the way he trained Ezra. Of his fire and his compassion and his willingness to die but his much, much stronger desire to live for all that was possible.