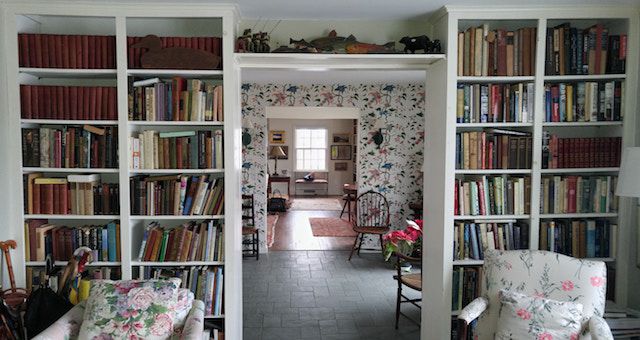 Critical Linking, a daily roundup of the most interesting bookish links from around the web is sponsored by Book Marks: A Reading Tracker.

“If you haven’t seen or heard of a book nook before, it’s a little shelf insert that goes between books and looks like a tiny door leading to an incredible place, or depicting unique sights. Here are some of the most creative, impressive ones, starting with this cozy-looking bookstore resting on a bookcase.”

I have so many books that I don’t even have enough space for books let alone inserts buuuuuuut these are fantastic and I want them!

“Between the mid-1950s through the 1970s, citizens engaged in a massive protest movement to fight for the rights and freedoms of all Americans. 1968 was pivotal in the civil rights movement, marked by the assassination of Martin Luther King Jr., the widespread riots that followed, and the passage of a new Civil Rights Act. The poems collected here revisit the heroic struggles of civil rights activists 50 years later. Poets influenced by the civil rights movement––a group that includes Margaret Walker, Nikki Giovanni, and June Jordan––used their work to instill a sense of pride in one’s identity, to praise freedom fighters and honor fallen leaders, to chronicle acts of resistance, and to offer wisdom and strength to fellow activists.

The poems are grouped by the dates of the events they address, with each poem’s publication date in parentheses. We have included articles, audio and video resources, and links for additional resources related to this momentous period in American history.”

Moving and very much worth your time.

“Cho Nam-joo, 41, is a former television scriptwriter whose novel Kim Jiyoung, Born 1982 became a hotly debated bestseller in South Korea when it was published in 2016, coinciding with the country’s #MeToo movement. Now published in English, Cho’s book uses the story of one woman to reveal gender inequality in all parts of South Korean society, from the privileging of male children to workplace discrimination and harassment. (Despite having the world’s 12th largest economy, a recent gender gap report ranks South Korea 108 out of 153.)”