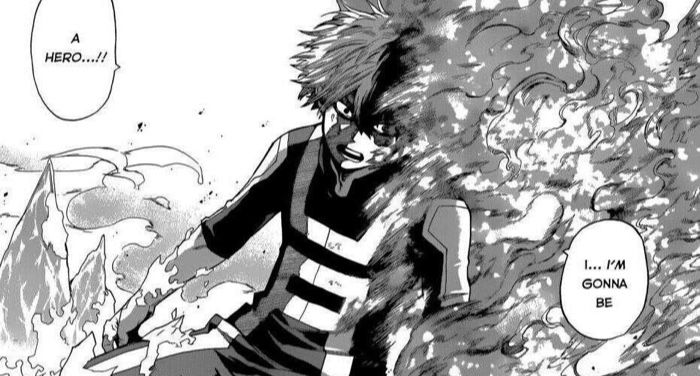 Being a hero is hard. Learning to be a hero is harder still, and even the best, most determined, hardest working students at My Hero Academia‘s UA High need a squad to support them not only when the business goes down but also in the in-between times. When it’s quiet and the anxiety kicks in. When there’s too much time to replay memories and think about what you could have done better or differently. When you’re just not sure if you can do it anymore.

Midoriya Izuku has it harder than most. Desperate to be a hero since he was old enough to know what the word meant, it turned out that he was born quirkless (read: powerless) in a world where most of the population was able to do at least some kind of party trick. It wasn’t until he was about to enter high school that he was gifted with his idols’ powers, a remarkable legacy that he worked hard to earn and that was so powerful it damaged his body every time he used it. He worked hard to adapt, to control, to command and he’s come a long way in four seasons and 25+ tankoban… with the support of his teachers and, perhaps even more importantly, his friends.

I don’t think anyone doubts Midoriya will be the Number One hero someday (though he may end up sharing the honor with one or two others). It seems only right to acknowledge the squad who helped him through the most difficult part of the journey and, I would guess, will still be standing with him when he gets there:

Iida is from a legacy hero family and has high expectations of himself and of his classmates. He is generally serious and controlled, working hard to meet the expectations his family has set for him and to live up to his brother Tensei’s (hero name: Ingenium) reputation. Though he can be overbearing, he also takes responsibility for the safety and well being of his classmates and cares about all of them very much.

Iida befriended Midoriya after the latter impressed him during UA’s entrance exams, and they quickly bonded over their dedication to becoming the best possible heroes they can. Their friendship was cemented when, after a rare lapse in judgement, Iida went vigilante and hunted down a villain named Stain who seriously injured Tensei. Stain used his quirk to gain control of Iida’s body and was about to murder him when Midoriya and Todoroki arrived on scene and intervened, saving Iida’s life.

Kind, empathetic, and social, Ururaka is quick to see the best in every one and everything, though she’s also honest, blunt, and fierce when it comes to defending the people she cares about. Some of her classmates look down on her vision of heroism as financial security, but her goal is to allow her parents to live a comfortable life which her friends, even those who have chosen the hero path for other reasons, have to agree is a noble ambition. She, along with Iida, is one of Midoriya’s first friends at UA, who she noticed because of both her power and compassion. He is her inspiration to be a hero who protects other heroes when they’re in need since he so often forgets to watch his own back when he’s busy saving others.

When they first started at UA, Todoroki viewed Midoriya as a rival for the top spot in 1A. He also harbored suspicions that Midoriya was #1 Hero All Might’s secret love child (let me tell you that I saw a Tik Tok the other day expounding upon a viable theory for that scenario and I am still shooketh). Those of you who are familiar with either the My Hero anime or manga (or both) know of the fraught relationship Todoroki has with his father, former #2 (now #1) hero Endeavor, and thus with his fire generating abilities until the UA Sports Festival when Midoriya, at physical risk to himself, and at risk of being knocked out of the festival, convinced Todoroki to embrace his abilities and come fully into his power. Since then, Todoroki and Midoriya have been close, if sometimes…odd friends.

There’s some debate as to whether or not Tsu is a full-fledged, canon member of the Dekusquad but the official wiki says it is so, and also, Tsu is rad, so I’m making the executive decision to include her. She was a later addition to the squad, tossed together with Midoriya when the League of Villains attacked a practice facility at UA during a training exercise, incapacitated the supervising instructors, including Aizawa, and leaving the students to protect themselves and one another until help arrives. Deku and Tsu prove themselves among the most able and tactical thinkers in class 1A, as well as those must concerned with the welfare of their classmates (they even work together to save Minetta’s sorry ass) and earn one another’s respect. Though the sometimes disagree on method, they both want to be the best possible heroes and save as many people as they can, which means when they do fight, they are always able to find common ground and repair their friendship.

There you have it: the official Dekusquad. Fans sometimes add Shinsou, Aoyama, and/or Momo, but as far as the word from the overlords is concerned, the Dekusquad is the four as listed above. That doesn’t mean Midoriya, Iida, Ururaka, Todoroki, and Tsu don’t have other friends; they’re all actually pretty popular, at least within class 1A. It just means that when things get really hairy, this is where the ranks are going to close.