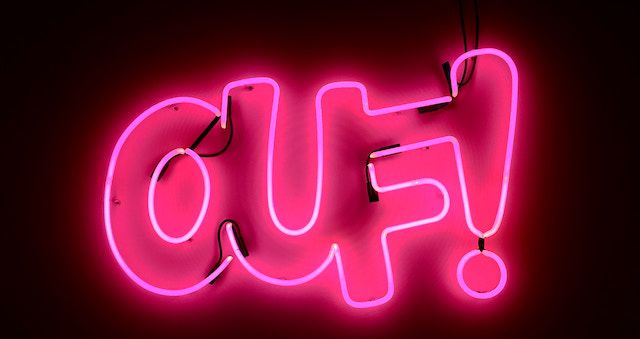 Each English speaker has a favorite piece of English grammar punctuation. When I asked Rioters their favorites, the interrobang, ellipsis, and semicolon were quick to come up. On the other end of things, there’s the hyphen, of which resident and renowned hyphen-hater Annika Barranti Klein says, “I actually love hyphens, but hate when they are used unnecessarily. WHICH IS MOST OF THE TIME.” (All lies; she hates them.) I personally don’t think the hyphen is that bad, but it’s not my favorite. All punctuation is important, but clearly some marks are better than others.

But, once and for all, you can find the definitive ranking of English grammar punctuation below, taking usefulness and personal feelings into account, from worst to best.

Does anyone actually use these for anything? Braces, which actually do look a bit like teeth-braces (another point against), are the worst of the English grammar punctuation gang. What’s worse: their most common use is in math. (Am I stereotype? Absolutely. Do I care? Not at all.) Even Grammar Girl has proclaimed she’s “never used curly braces.” So, while they’re kind of cool-looking, they’re pretty useless as punctuation goes as far as I’m concerned. Last place.

I’ve admittedly used brackets on occasion, albeit probably incorrectly (I find they help with clarity in parentheses; when I want to parenthesize within parentheses, it helps to use square brackets instead of another set of parentheses). Otherwise, their use seems pretty limited. Your Dictionary describes the square brackets as a piece of punctuation used for “for technical explanations or to clarify meaning. If you remove the information in the brackets, the sentence will still make sense.” In many cases, a comma would suffice.

Many of us, myself included, have begun omitting apostrophes for the sake of convenience and speed in textual communication. Grammarian though I might have been, I’ve come to realize after a long battle with myself that as long as the message is clear, grammar is irrelevant. Don’t be a jerk. Anyway, one of the first things to go in my text conversations was the apostrophe. If I wrote “dont be rude,” my meaning of “do not be rude” was clear. It’s rare that the apostrophe contributes meaningful clarification that can’t be otherwise drawn from the context. Generally, this includes possessives. And, honestly, with all of the incorrect usage the apostrophe gets (particularly around the holiday—my family is not “the Hargreaves’s”; we are “Hargreaveses,” silly as it might look), the world might be better off without it. On the other hand, I do appreciate its use in adding texture and dialect to dialog and elsewhere. Know what I’m sayin’? Otherwise, it can go.

Hyphens. The bane of my existence. I still remember a fifth grade spelling test that focused on words that were either really two words (home run—are you kidding me?), hyphenated (merry-go-round? forget it; I’ll just use “carousel”), or compound (I still get caught up on makeup). Why weren’t all of these hyphenated? Or, better yet, none of them. The hyphen tends to just be unnecessarily confusing for writers. It’s not the absolute worst in my book, though. I do use it fairly often. It’s helpful for clarifying compound adjectives, like “deckle-edged pages” and I like it when stringing together a whole sentence that serves as an adjective, as in this quote from my all-time favorite movie, White Christmas: “Well, I’m, uh, more the ‘I-don’t-mind-pushing-my-best-friend-into-but-I’m-scared-stiff-when-I-get-anywhere-close-to-it-myselfing’ kind.” The hyphen isn’t essential, but it has some fun uses.

The lesser-known but oft-used en dash! It looks like a hyphen, but is actually slightly longer (the length of an n when done with technical correctness, which is why it’s called en dash). It’s somewhat useful for things like indicating ranges, as you do with years (e.g. 1990–1999), but might almost as easily be replaced with text (e.g. 1990 to 1999). You’ll pretty much only see it used to replace the word “to” making it functionally fairly useless, but useful in the practical sense as it saves time (both in reading and writing) and space (great for things like plane tickets, already cramped with information: BOS–LAX).

There’s something kind of cute about the colon. For introductions of additional information, emphasis, and things like separating units of time (4:32:09), it’s fairly versatile, though not too common when it comes to writing. It’s nice to have but we could make do without it, if need be.

Is it traditionally good writing practice to use a lot of slashes? No, but I do it anyway. Useful for indicating something dependent on a variable or a vague memory or range, e.g. “I called her back in February/March.” It’s a fun little piece that maybe many don’t consider a piece of punctuation (much like the space, as Rioters were recently discussing), but I argue that it is. Not crucial by any means, but functional.

First, let me say that you can pry the Oxford comma from my cold, dead, and rotting fingers. If that was all we were talking about, it would be a contender for the #1 spot. It’s probably one of the most incorrectly-used pieces of punctuation. I overuse them, for sure. They’re tricky but helpful for managing rhythm in text that would otherwise be evident in speech.

Generally, most questions start with one of those beloved five-W’s (who, what, when, where, why + H’s how) and the construction of the sentence that follows, along with context, can lead the reader to determine whether a question is really being asked. Not all questions or exclaimed questions start with one of those words, though again, context can help. And certainly sentences starting with any of those words might not be a question. So ultimately, the question mark is a pretty crucial item of the punctuation catalog.

If you watch The Late Show with Stephen Colbert, you might hear a lot about this little guy when he reads a certain person’s tweets. While it certainly has a number of uses, it has a tendency to be misused. Still, as someone who speaks with a lot of pausing and thought-gathering, I’m a fan.

If you’ve ever read anything I’ve written, you’ve probably noticed I way, way overuse parentheses. I’m someone who, for as much as it annoys me in others, tends to ramble and make asides when I speak, so it makes sense that I do it in writing, too. They’re useful little things and they’re kind of cute, too. Are they absolutely essential? Definitely not. But I love them anyway.

I once had a creative writing class with a grad student who refused to use quotation marks in their novel, and it really left us all scratching our heads. Too many times, I’d have to reread sections to determine if someone was speaking or if it was just part of the narrative. So, they’re not totally necessary, but they are really nice. Plus, what would the world be without Unnecessary Quotes?

Ah, the interrobang. Overlooked and oft-forgotten, this sweet exclamation-question combo is terribly useful, we don’t see it too frequently in text. A piece that indicates exactly what you expect it to (an exclamation and a question), it’s endlessly fun. With dual uses, it’s difficult to place the interrobang outside the top five in English grammar punctuation ranking.

Where would we be without the period? Nowhere, that’s where. It’s such an important piece of punctuation that sometimes, we even speak it on top of ending a sentence to emphasize the end of that sentence. (How many times did my mom say, “We have food at home. We are not going to McDonald’s. Period. End of discussion.”?) Given that Latin lacked periods, I’m awfully grateful that we have them in English today. Can you imagine Game of Thrones as one long sentence without periods?

Oh, em dash, how I love thee. The em dash (its name coming from its length matching that of the letter m) is great for creating a sort of rhythm in your writing. It is absolutely unnecessary, but another piece that I use regularly. Like the parentheses, it can be used to make asides. The Punctuation Guide describes it as “perhaps the most versatile punctuation mark” as it names several other uses for the em dash. I can’t quite put my finger on it—but there’s something that is so, so satisfying about it.

Finally, number one! It was a close call with the em dash, but the semicolon is ultimately the best of the English grammar punctuation. Why? you ask. Well, first, it’s attractive. I mean, look at it, with it’s nice little period sitting neatly atop a comma. Just lovely. Second, it’s terribly useful. As I’ve mentioned, I tend to ramble. The semicolon enables my rambling without making it look, well, rambly. Most writers use it rather sparingly—sometimes too sparingly—making it all the more delightful when it pops up. Semicolon, I salute you!

Was your favorite English grammar punctuation number one? Did it make the top five? Tell us in the comments! Meanwhile, love punctuation in general? Grab some sweet punctuation jewelry.