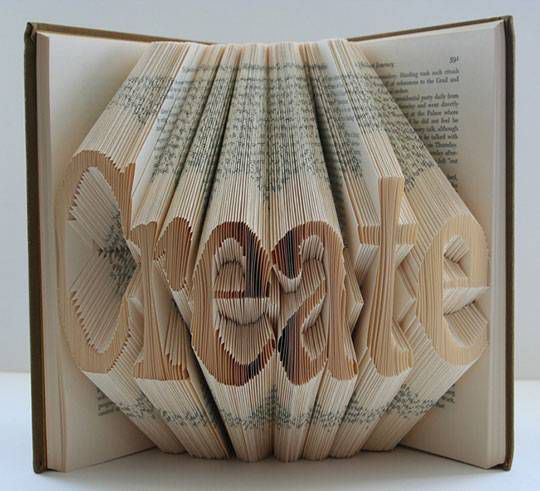 I love a good book craft, and it seems I’m not alone. We’ve got this post and this post and others buried in the Riot archives. These posts can draw out harsh criticism, mostly of the “how dare you destroy books” and the “I guess you’re not a REAL reader because you aren’t READING those pages you’re crafting with” variety, and it’s starting to get my goat. So I’m gonna hop up on my (low to the ground, I’m a short lady) soapbox to defend these bookish craft projects.

There are people who rip up brand new books for the purposes of interior decorating, sure, just like there are people who select books for their shelves because they color-coordinate with the rest of the room- they’re probably not readers, and are simply using the books as pretty objects (which is fine). But these aren’t the crafters I’m talking about. We’re a book site, after all, so let’s function from one fundamental assumption: the people talking about bookish crafts here are readers, even if they make Christmas ornaments out of book pages. The lack of fetishization of ink on paper with a binding does not disqualify someone from readership. It disqualifies someone from fetishization of ink on paper with a binding.

A love of reading can be an all-encompassing thing. Some of us fill our walls with books and/or our ereaders with files, but it’s not enough. We want the Harry Potter sweatshirts and those Toms that have dictionary pages printed on them and the book page Christmas wreaths and the necklaces with Jane Austen’s portrait on them. Surrounding ourselves with bookish-ness is how we nerd out. And sometimes that can mean taking scissors to old paperbacks, but let’s now introduce assumption number two: it’s with intention and forethought.

If the people here are readers (which they are, obviously), it makes sense to acknowledge that they’re not going at first editions of Pride and Prejudice with their trusty pinking shears. Most readers aren’t going to waste $29.99 on a brand new hardcover to then turn around and make it into a craft. So what do most readers craft with? In my personal experience: newspapers, phone books, out-of-date and irrelevant textbooks, books that have been damaged (by water or children with markers or dogs or whatever), tattered mass market paperbacks (really, is the world going to miss a beat up copy of that Dean Koontz thriller from 1994), books that have been sitting forever on the shelves of local thrift stores, unpurchased and forgotten, books that libraries are tossing, which happens continuously as they make room for new books, and even books bookstores have to rip the covers off when they do returns.

So let’s cut bookish crafters some slack. Instead of breaking out the pitchforks and the “you’re not the right kind of reader because you don’t think the way I do” stuff (Which is really just snobbery, isn’t it?), let’s give other readers grace. It’s not wanton destruction to make something lovely out of a book that no one wants- it’s giving it second life. It’s not sacrilegious to create something pretty out of paper that was headed for the trash can anyway, especially when it contains text you can more often than not find in the cloud. If you can’t bear the thought of putting scissors to page, awesome- don’t. But let’s cut the melodrama and the faux-righteous outrage about readers who can.