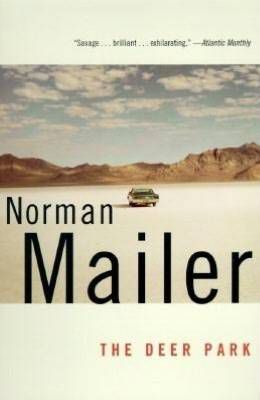 I went to Palm Springs last weekend. Living in Los Angeles, this is something that I can just do, which still feels really absurd and wonderful to me, though I’ve been several times now. This time I thought it would nice, while I was there, to read some fiction that takes place in Palm Springs.

Turns out there’s not very much of it, and what exists tends to fall into one of two categories: novels where people go to Palm Springs to commit murder, get murdered, investigate a murder, or dump a body; and stories that parody the Palm Springs social set, fanning themselves around the pool, cheating on their spouses, embezzling money, and generally acting like Frank Sinatra. Oh, but then they get murdered.

So really, the books fall into one category: moral depravity → murder. 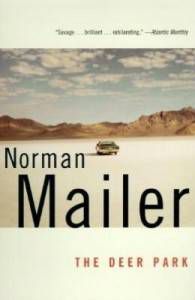 I’d already read The Deer Park, Norman Mailer’s lambasting of the “American Dream” as acted out by a cast of Hollywood a-holes hanging out in “Desert D’Or,” a stand-in for Palm Springs.  The publisher describes Desert D’Or as, “an incestuous hothouse of a town—a haven for manipulators, film stars, lovers, pimps, producers, whores, gamblers, scriptwriters and cheats.”

Mailer’s protagonist, Sergius O’Shaughnessy, retreats to Desert D’Or to write a novel. “But O’Shaughnessy’s burning ambition begins to lose its edge; lured by greed and ruled by weakness….”  → moral depravity.

I do a search for “novels that take place in Palm Springs,” and hit upon: The Secrets of Harry Bright, by Joseph Wambaugh. Wikipedia says, “The novel, set in and around Palm Springs, California, savages a wealthy ‘occasional home’ mentality characterized by golf, excessive drinking and drug use, and discriminatory country clubs.”

I was kind of into that, especially the golf.

The LA Times says that, “Wambaugh has a sharp eye for the resort, with its 50 golf courses, 200 hotels and two bits of conversation: ‘Hot enough today?’ and ‘Where are we eating tonight?’ In his recent fiction, he’s become more interested in suspense, and the plot of this novel is an ingenious variation on the traditional locked-room whodunit. A young man’s body is found shot in a burned-out Rolls-Royce in the desert….”

The Claire Gray Mysteries, by Michael Craft. There are four of them – Desert Autumn, Desert Winter, Desert Spring, Desert Summer – and all revolve around Claire Gray, the head of the theater department at Desert Arts College, near Palm Springs. Each novel essentially begins with Claire finding a body and…end. Moral depravity. Murder.

Poodle Springs, an unfinished novel by Raymond Chandler, has his famous Philip Marlowe moving into a mansion in “Poodle Springs” (roundly acknowledged as representing Palm Springs) with his new wife, where debauchery, illegal gambling, missing money and other shady stuff goes down basically the second they pull into town; like, the car is still moving, and everything’s already a shit storm of moral depravity. 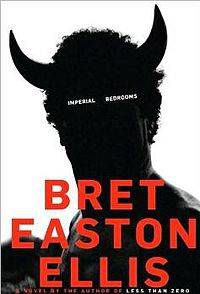 Okay, and then we have Imperial Bedrooms, which I’d already read. Bret Easton Ellis’s Less Than Zero-25-years-later was actually the first book that came to mind. In the novel, Clay takes two teenaged prostitutes to a house in Palm Springs, and films himself brutally debasing them. (Actually, if you do your research, you’ll find the “house in Palm Springs” trope cropping up all over the place in Ellis’s work. Trust me: Nothing good ever happens at the house in Palm Springs.) Imperial Bedrooms goes all the way, using the town and the surrounding desert itself as a virtual stand-in for violence and horror; the place to go to torture and kill people.

Which, I guess it kind of is: all those long dusty roads, high desert winds, rich people with bad taste in art just lolling around their pools, waiting to get stabbed.

But I’m not so into that kind of novel, at least not while I’m lolling around a pool like Frank Sinatra. So I found myself somewhat stuck.

God help me: I read the internet.