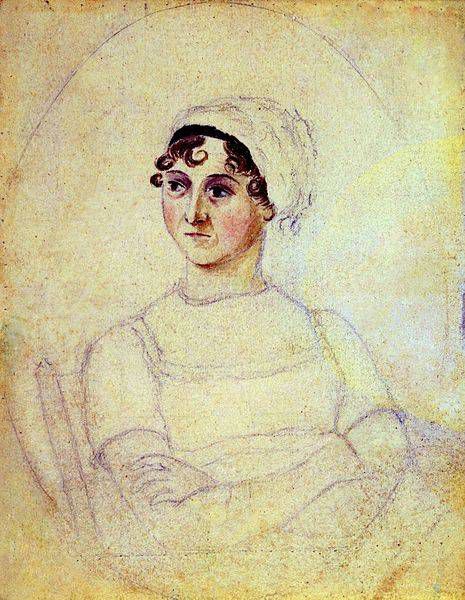 Let me first wish you a very happy 238th birthday. I mean, they say you died almost 200 years ago, but now, in 2013, you’re as well known as Elvis, whom people still see, and he’s supposedly dead, too. I’m stating the obvious here, but you’ve done what very few of us humble mortals can hope to do: achieve immortality through writing.

Now, let me also say it is a truth universally acknowledged that a reader in possession of brains and curiosity must be in want of a good book. And good books you delivered. They’re still popular because they’re not only/really about late-18th and early-19th century British genteel society and social mores but relationships between men and women and family conflict and ego and ambition. Many readers have seen themselves in Marianne or Emma, Colonel Brandon or Mr. Knightley. You hit upon the universal in the particular, and made us laugh, which is a BIG DEAL. Good humor-writing is hard to find.

Which brings me to our first meeting. It was in a Waldenbooks and I was around 13. As with many things in my life, I had decided on a radical, major course of action and prepared to dive right into it. In this case, I had decided to become a Reader of Literature. I don’t remember the exact circumstances, but I had heard your name connected to words like “Literature” and “Classic” and decided to make you my first classic writer. Up until then, I had been reading a lot of young adult books, Nancy Drew, Little House on the Prairie, Michael Crichton, R. L. Stine (eclectic, if you will?). I wanted to enter the Great Cannon of Literature and be a Smart Person who Read Old, Difficult Books.

At the bookstore, I chose Pride and Prejudice, probably because it had the coolest painting on its cover. I assumed that it would be boring, dry, dusty old stuff because it was from a time and place about which I knew next to nothing. So that afternoon, lounging on the living room sofa, safe in the knowledge that everyone else in the house was occupied and wouldn’t bother me, I opened the book and started to read.

Several minutes later I was running around the house to find my mom because I HAD to read a passage to her. I couldn’t believe it. This novel was HILARIOUS. I remember sitting her down and reading aloud the part where Mrs. Bennet scolds Kitty for coughing and Kitty replies that she doesn’t cough for her own amusement. It struck my inner funnybone and I was shocked that any writer so long dead could have made me belly-laugh- me, a late-20th century American girl. My mom looked at me kinda funny and said yeeeah, that’s um funny, but I was already back in the living room reading again. The humor was biting, the prose was beautiful. It was what you might call a revelation.

This connection across the centuries through literature only encouraged my budding love of history and travel (whether physical or temporal). I returned to Pride and Prejudice in grad school during a seminar on British Literature. In my final paper of the semester, I claimed that this novel is preoccupied with the act of reading. Ultimately, I argued that you and the anonymous early reviewers of Pride and Prejudice viewed reading as a nexus where real-life experiences and fictional texts meet and influence one another. Reading and living are not separate acts but feed back into each other. Your interests determine what you read, and your reading broadens your understanding of a world that can be known mainly through reading.

I’ve read most of what you wrote, but there are those stragglers that I haven’t had time for yet. But you understand, right? You’d love it if I read your books throughout my life, and not just in one burst during my teens.

I’m going to close now, since you’re probably getting bored. After all, I’m no you. But I just wanted to say thank you and happy birthday and I hope you like chocolate cake. I think I’ll buy some and eat it for you.