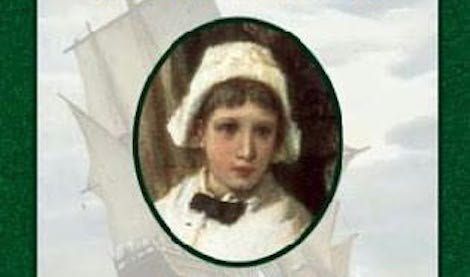 At the very back of the children’s room in my hometown library is where I first discovered the Dear America and Royal Diaries series. It’s been too many years to remember which of the two series I read first—let alone which book from either series—but the impression it left on me has never faded. If you don’t quite recall these books, let me help you out a bit: deckle edged pages, a detailed cover design often with a child’s portrait, a ribbon for marking your place, a diary format, a reference to a historical event or period. Ringing any bells? 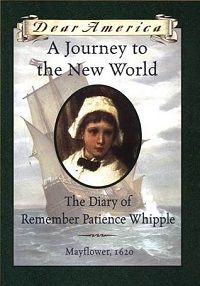 The Dear America series originally held 36 titles but has since expanded and received a relaunch with updated covers in the ‘10s. The first in the series, A Journey to the New World: The Diary of Remember Patience Whipple,Mayflower, 1620 was written by Kathryn Lasky and is a fairly sensible start to a series about American history. The series might have done better to start with an Indigenous perspective, though the people native to the land we now call America play a reasonably sizable role in Remember’s diary. It’s also worth noting that referring to the land as “the New World” is also symptomatic of a white-Eurocentric view as that part of the world; clearly was not new to its inhabitants. Eight-year-old me had no concept of this, however, and nostalgia is a powerful drug.

Still, if it’s been a while since you’ve flipped through the pages of A Journey to the New World, you might be surprised to revisit it. Remember’s diary entries can be quite frank and dark—a decent reflection of the colonist’s early years in what would become Massachusetts. Death seems to plague every corner of the settlement, Remember is one of only a few children and is consequently rather lonely, marriage is often a thing of survival and convenience, and a new environment has plenty of features to create both anxiety and excitement (as new things often do).

Readers who stuck with the series visited all over time in America, including Lowell, Massachusetts, in 1847 (So Far from Home: The Diary of Mary Driscoll, an Irish Mill Girl), Mars Bluff, North Carolina, in 1865 (I Thought My Soul Would Rise and Fly: The Diary of Patsy, a Freed Girl), Chicago, Illinois, in 1919 (Color Me Dark: The Diary of Nellie Lee Love, the Great Migration North) and, in a later publication, San Francisco, California, in 1906 (A City Tossed and Broken: The Diary of Minnie Bonner).

When Dear America wasn’t enough, there were spin-offs to turn to. The Royal Diaries were perhaps among the most popular, as young monarchs of various countries shared their thoughts. Featured royals included Elizabeth I; Marie Antoinette; and Nzingha of Angola, Africa, among others. How exciting, to be privy to the private thoughts of young royalty! (And you can believe that naive me thought that, even if these were shelved in fiction, at least some of the passages had to have come from their alleged sources.)

After you tore through The Royal Diaries, you could read My Name Is America, which gave us stories from young men of America—because, you know, boys can’t have diaries. Diaries are for girls with cooties. And if the Dear America and The Royal Diaries books were all from the perspective of girls, what, by golly, would the boys read? Certainly not girl books. The horror. (Okay, okay, moving on.) With The Royal Diaries and My Name Is America aimed at slightly older children, our younger siblings were left hungering for something of their own. So, Scholastic gave us My America, aimed at children around age 10.

Whichever of the series you read, the brilliant thing about them was the refusal of the authors to back down from or overly sugar-coat some of the darker aspects of our history, like the deaths Remember shares in her diary of “the New World.” The characters gave readers a person to connect with while the characters’ stories delivered not just riveting plots, but also generous doses of history. It was—and is—a special way to make fiction legitimately educational. For readers especially interested in the historical context of the stories, authors included a brief history lesson as a sort of appendix. Here, they pointed out inaccuracies (usually committed for the sake of plot) and provided additional information along with lists for further reading. The series may not be perfect, but readers can connect all sorts of ways with Dear America and its spin-offs; that’s one of the things that makes it so enduring. And if it’s been a while since you’ve read it, see if you can’t find a copy and experience the magic again.