You might find this hard to believe, but Dead Poets Society turned 25 on June 9. I know. Nothing like making me feel super ancient, huh world?

Anyway, I recently re-watched this beautiful film and now I love it even more. And while John Keating does throw around literary references like so many footballs, without ever diving in and, you know, doing some close reading or situating writers in their historical/political contexts, the references do make many of us smile. After all, you’ve got your Whitman, your Thoreau, your Tennyson, and your Shakespeare (among others). What more could you want in a film? (Oh, and of course there’s Robert Sean Leonard and Ethan Hawke). 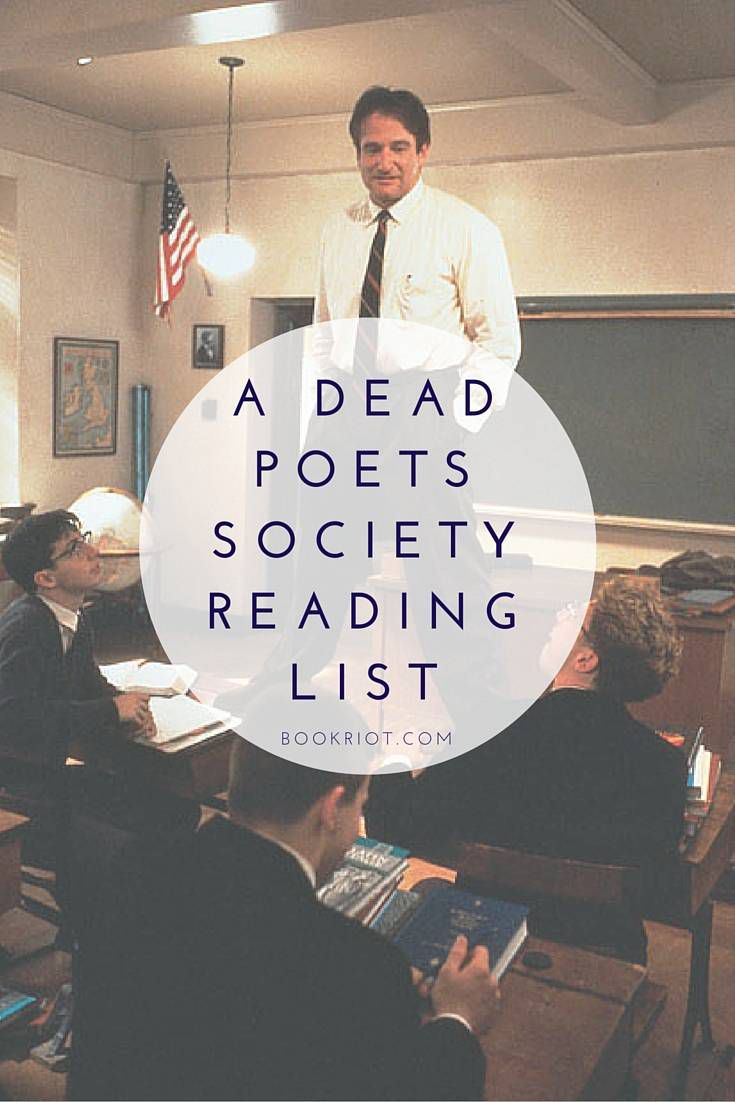 In honor of this quarter-century milestone, I’ve assembled a little reading list, which includes texts referenced in the film, as well as a few other books that have a similar theme.

(And for a great Dead Poets Society live-blog, check out Jeff’s post here).

“Ulysses” (1833) by Alfred, Lord Tennyson- Remember that scene where the guys are in the cave for the first time, reviving the “Dead Poets Society?” And Neil reads those lines from “Ulysses?” *swoooooons* This is my favorite poem, guys, because it’s so lyrical, and despairing yet hopeful, and just so perfect. So get thee to a library or bookstore and grab a copy of Tennyson’s poems, because if you like “Ulysses,” you’ll like his other dramatic monologues, and much of the rest of his poetry.

Want MOAR Tennyson? Well, you’re in luck, cause this biography by John Batchelor (Tennyson: To Strive, To Seek, To Find) just came out late last year and I read it and now I’m recommending it. Good stuff.

A Midsummer Night’s Dream (1590-96) by William Shakespeare- If you haven’t seen this performed a dozen times or read it for class a million times, I heartily suggest that you get to it. It’s as whimsical and fun as only a Shakespeare play can be, and when Neil performs as Puck in DPS, we realize just how timeless the bard’s words really are. After all, Puck’s words about forgiveness are just as applicable to Neil’s difficult situation with his father in 1959.

“O Captain! My Captain!” (1865) by Walt Whitman- Whitman’s poem is dedicated to Abraham Lincoln (the “Captain”), but in DPS, John Keating suggests that his students call him “Captain.” And while Keating quotes the poem as if it is a triumphant piece, it’s actually a lamentation for the assassinated president at the end of the Civil War. Only at the end of the film is it used more appropriately, when Keating’s students pay homage to him while standing on their desks as he takes his final leave of them.

Walden (1854) by Henry David Thoreau- Keating quotes one of Walden’s most famous lines, both to his students and in his DPS handbook Five Centuries of Verse: “I went to the woods because I wished to live deliberately, to front only the essential facts of life, and see if I could not learn what it had to teach, and not, when I came to die, discover that I had not lived.” Just as Thoreau wished to rid himself of the chains of modern life, Keating encourages his students to shake off the shackles of tired maxims and rote learning and express themselves freely. Walden, though, is not just a journal of how Thoreau lived in the woods; it is also a philosophy of life, a political and socio-economic exploration of what drove him to seek solitude and self-sufficiency. (And his “Civil Disobedience” essay? Fan-frickin’-tastic).

“The Road Not Taken” (1916) by Robert Frost-  Again, another one of those texts that you probably had to read a gazillion times in high school and/or college. Not that that’s a bad thing- it’s just that there’s so much more to Frost. This poem’s genius is in its articulation of how we make choices, and how we think about fate and destiny. I have this particular collection of Frost poems, and have had many hours of happy reading because of it.

“She Walks In Beauty” (1814/5) by George Gordon, Lord Byron- Keating often refers to or channels the Romantics, and Byron was Romantic Poet Extraordinaire. “She Walks In Beauty” is a short, lyrical poem loaded with impressionistic imagery. Into that kind of thing? Check out the rest of his schhhtuff.

“To the Virgins, to Make Much of Time” (17th c.) by Robert Herrick- Yeah, you know this poem- starts off with “Gather ye rose-buds while ye may,/ Old Time is still a-flying.” Of course, Keating uses it to illustrate his philosophy of living life according to the motto “carpe diem,” but we all know that the poem is really about…well, you know…sowing those wild oats or whatever….And now you’re all like wut 17th century dudes writing risqué stuff no way, and I’m like yes way playas are playas in any century.

The Secret History (1992) by Donna Tartt- I recently read this brilliant, chilling novel and am all Team Tartt!!!  Why did I include it on this list? you ask. Well, even though Tartt’s book takes place at a college and a murder occurs (and in DPS it’s a prep school and suicide), both film and novel have this haunting quality, where a place that should be a sanctuary is actually just an extension of the real (cruel, indifferent) world. In both, a young male character undergoes such severe emotional stress that the foundations of his moral and ethical beliefs crumble. And then there’s the whole New England winter landscape thing going on.

A Separate Peace (1959) by John Knowles- Yup, 1959, same year in which DPS is set. Again, we have a prep school, complex and emotional relationships between young male characters, and tragedy. I have to admit, I haven’t read this since high school, but I remember becoming engrossed in it and now I want to reread it *sidelong glance at her TBR pile*