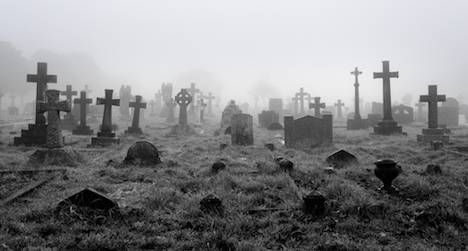 The following spoiler warning is itself a spoiler for some books, given the title of the post. People in the following books die, is what I’m saying.

The following post contains spoilers for The Raven King, Game of Thrones (the TV show which I am treating like a book until the book achieves corporality), Harry Potter, I guess? And a handful of Connie Willis novels.

The ending of Harry Potter, where he comes back to life ‘because magic,’ bummed me deeply out. Dead people should stay dead! What is even the POINT if they don’t stay dead. And more recently, at the end of Maggie Stiefvater’s powerful and jaunty and extremely feelingsy Raven Cycle, Gansey (who we have known is marked to die from the first book) dies, AND THEN COMES RIGHT ON BACK. And I, frankly, am sick of this bullshit. ‘Because magic’ my ass.

Dead people should stay dead. The stakes in a Connie Willis novel are EXTREMELY HIGH because anybody can die, and they’ll actually be foreverdead. In that one about the plague, EVERYONE dies, only they don’t all die at once – they die one at a time, over hundreds of pages, and you’re reading and you’re saying to yourself, Surely they will not all die. Surely the child will not die, surely the kindly priest, surely the time-traveler will not be left alone here in this village with everyone around her dead. AND THEN THEY ALL DIE AND STAY DEAD AND YOU CRY EVERYWHERE AND IT IS EXTREMELY CATHARTIC.

And super hot out, circa my eyeballs.

And then, having read that one, you read Blackout, where the time travelers time travel to WWII and they get STUCK THERE and it’s the BLITZ and you’re like, Oh my god they might all actually die, and the time between the end of Blackout and whenever you got your hands on All Clear is years. It’s eons. Main characters might be dying, you don’t even know. It’s stressful.

But I LIKE the stress. I like the SURPRISE. Part of the early fun of the GoT novels was before you realized what you were up against, when Ned Stark is killed and you’re like OH MY GOD I THOUGHT HE WAS THE PROTAGONIST. Ok oh well looks like Robb Stark is actually OH MY GOD WHAT IS MY LIFE. It’s so TENSE when anybody can die.

I want to feel tense, and I want to feel sad when things go pear-shaped. Gansey was dead for, like, minutes before he came back to life. Harry Potter barely even died! I had exactly zero time to be sad before I was like, Oh. Well then. I want literary deaths to mean something, because death means something. I want a certain amount of verisimilitudinous…ness. Death in literature echoes death in real life and it is not fucking fair when you can just wave your hand and not be dead after all. I don’t get to go to Hogwarts and I have to actually die when I die everything is bullshit.

To be honest. It feels like a failure of nerve on the author’s part. JK killed off so many characters in the name of story, for which she is still apologizing, but she could not kill off her hero, she had to go and give him a dumb epilogue (one of the many pros of letting characters stay dead is that they don’t get a dumb epilogue). The Raven Cycle felt like Stiefvater was going to really and truly let Gansey die, and it was going to be noble and sacrificial and run counter to his personal history of getting whatever he wants because he is Lord Gansey III, but then OH DANG he got a happy ending, too. (Noah stays dead, but he was dead to begin with.)

But then, ok. There are some un-deaths that I am super ok with, one recent one in particular (this is the part where I treat HBO’s Game of Thrones like it’s one and the same with A Song of Ice and Fire because I gotsta). Why am I not mad about this. Is it because we all knew Jon Snow was coming back, so we never really felt like he was dead in the first place? Is it because this is a world where dead people refuse to stay dead all the time? Or is it because he’s been brought back with so much story left to go, the way Gandalf does (oh, sorry, spoilers for a 60+-year-old fantasy series as well), because then their deaths aren’t set up as the Final Action Sequence, with the resurrection as a sort of half-assed dénouement?

I dunno. I dunno why Jon Snow’s return feels like a triumph where Harry’s and Gansey’s feel like cop-outs. Maybe you’ll know.

I feel like I overuse this gif but I’m a very confused person.

How do you feel about literary deaths? Are there any undeadings that you feel are baseless and lame? *

*(Please don’t be like, ‘Jesus!’ because frankly that is unkind and also not very clever of you.)