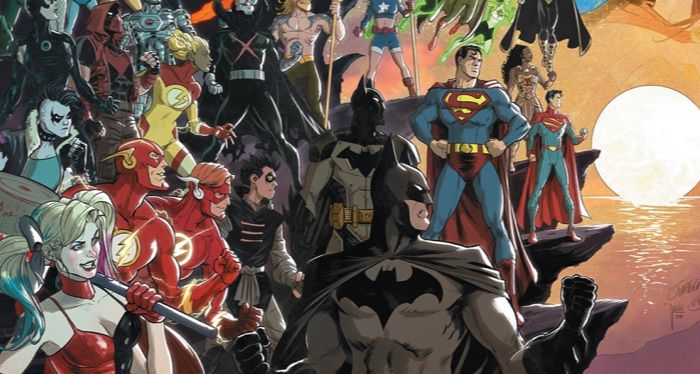 Well, folks, DC is rebooting their universe yet again. With the conclusion of Death Metal in December, the Rebirth universe is no more; beginning in March, the company is embarking upon Infinite Frontier, in which the characters inhabit not a multiverse but an omniverse, and everything is canon, including all past contradictory continuities. If that sounds frustrating, confusing, and more than a little silly, welcome to comics!

This is the fourth major reboot for the company and the third since I started reading comics, and I’m back again to beat the drum I always beat in DC’s eardrums: Where are the women? Did they hire them this time? Or are we looking at the same embarrassing gender disparity as always?

To crunch these numbers, I looked at DC’s solicitations for March 2021, when Infinite Frontier officially kicks off. I looked at both Infinite Frontier on its own as well as DC’s entire catalog of single issues for the month. Also, please note that I’m only including creators credited in the solicitations — writers, pencillers, and any variant cover artists — and have no information about inkers, colorists, and letterers.

From what I can tell, there are 19 books publishing in the Infinite Frontier universe omniverse in March, starting with Infinite Frontier #0, an anthology book that boasts 21 male creators and only 3 women. That’s a single book with two dozen credited creators, only 12.5% of which are female.

This turned out to be prescient, because across the 19 Infinite Frontier books in March, I noted 80 men and only 12 women — 13% female. When looking at all of DC’s books for the month, not just Infinite Frontier, that number is infinitesimally higher: 35 books with 116 men and 19 women gives us a 14% female lineup. I also isolated the numbers for DC’s Black Label imprint for adult readers, to test my suspicion that prestige comics are even more skewed toward men than mainstream ones, and found that to be true, although not true enough to be statistically significant; nine books with 28 men and four women, or 12.5% female. (Although it’s worth noting that not only do more men get work, but the men who do get work get more work — there are as many Black Label books being written in March by Tom King alone (three) as there are Black Label books written by women (Katana Collins, G. Willow Wilson, and Kami Garcia each have one).)

Hmm, I thought, well, there are more Infinite Frontier books launching in April. Maybe some of those have female creators!

So I looked at the solicitations for April. There are four new books being added to the Infinite Frontier lineup, with a total of 16 credited creators. Not a single one of those creators is a woman.

To the best of my knowledge, there are zero nonbinary creators with a book at DC in March or April.

Fictional representation is perhaps less important than diversity of creators, but it is important, so let’s take a look at that as well. Now, DC is experimenting with more anthology books in 2021 — Batman, for example, will headline three books that also include backup features with different leads — so it’s a bit tricky to say how many characters are starring in books. If Grifter has a backup feature in Batman: Urban Legends but neither his name nor his face are on the cover, is he still a star? (Also, Grifter? Really?)

But let’s put it this way. Of the 19 Infinite Frontier books in March, there are only three with a female headliner: Catwoman, Harley Quinn, and Wonder Woman. If we include backup features, Harley also has a slot in Batman: Urban Legends. In April, that slot goes to Barbara Gordon. The male backup features in that book (Red Hood and Grifter) and the ensemble one (Outsiders) do not change.

There are five solo books with a male lead and no backup features. There are four with a male lead and all male backup features (Superman stars Jon Kent and Jimmy Olsen, Action Comics stars Clark Kent and Midnight, and both Batman and Detective Comics star both Bruce and Damian Wayne). There’s Batman: Urban Legends, which stars either one man (Batman) or three male leads, one woman, and a team, depending on how you look at it. And there are six ensemble books, one of which (Batman/Superman) includes no women.

April brings us three more male-led books, including yet another Batman book, and an ensemble book (assuming Green Lantern doesn’t inevitably default to only being about Hal Jordan).

And though I don’t feel comfortable making assumptions about the race or sexuality of creators and thus running those stats, fictional characters are fair game, so I can tell you that there are zero Infinite Frontier books with solo leads of color in March, unless you count Nightwing and Catwoman, both of whom have occasionally but inconsistently been depicted as POC. If you include backup features, there’s Damian Wayne, who has also been whitewashed on a regular basis. April will bring us Tim Fox in The Next Batman and Damian in a new Robin series.

In terms of LGBTQ+ leads, we have Harley Quinn and Wonder Woman, both of whom occupy a weird liminal space of “canonically bisexual but DC’s real cagey about it on occasion.” And if you include backup features, there’s Midnighter.

No Supergirl, despite five successful seasons on TV. No Black Lightning except in the Outsiders backup feature. No Batwoman. No Constantine. The only glimpse of any of the Batgirls is that Barbara Gordon backup in April. Stargirl gets a backup feature in Infinite Frontier #0, but then what?

But hey! Grifter’s back! Despite no one asking for him!

Infinite Frontier is a new universe, the first one shaped under the stewardship of DC’s new senior VP, Daniel Cherry III, and their new editor in chief, Marie Javins. Both Cherry and Javins have spoken about the importance of diversity. This could have been the dawn of a new day, one that reflected the actual state of the world we live in and the genuine diversity of comic book readers.

But these numbers look identical to what I noted last year. They look identical to the state of gender diversity at DC ten years ago, before the launch of the New 52 infamously dropped the percentage of female creators from 12% to 1%. If it’s taken DC a full decade to get back to the already completely unacceptable status quo, something is seriously wrong. And there’s no indication that they are addressing either the professional exclusion by gender or widespread sexual misconduct that’s been alleged at DC, not to mention the racial discrimination.

DC can reboot with increasing frequency all they want. But until they address their systemic issues in regards to their hiring, management, and storytelling, everything else is merely window dressing. Universe, multiverse, or omniverse, Infinite Frontier just looks like more of the same to me.