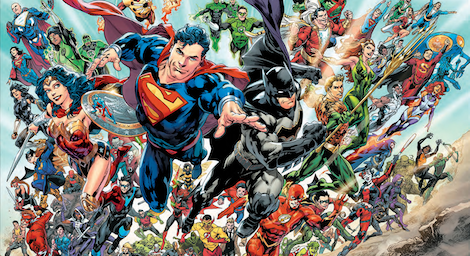 Back in 2016, DC announced a relaunching of their entire publishing line, branded as DC Rebirth. Gone was the highly controversial “New 52” that they had been publishing for the past five years; now we were in the Rebirth era! I use the past tense because as of December 2017, DC dropped the Rebirth branding from their books and they’re just…regular comics. Rebirth, as an initiative, is over, but we’ve still inherited the new hybrid continuity it created. But what exactly does that mean? And what is the best DC Rebirth reading order if you’re just getting started with these?

What is DC Rebirth?

To answer this, we need a brief history lesson on DC’s past reboots. DC history roughly divides into four major eras: 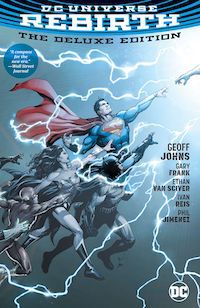 Pre-Crisis: Starting with the debut of Superman in 1938, this includes all comics through the mid-’80s, before rebooting was a glimmer in any TV executive’s eye. As you might imagine from nearly 50 years of comics, the Pre-Crisis era was one of sprawling, contradictory continuity. Some of its distinguishing characters included a vast multiverse of parallel universes, and a Superman who arrived on Earth with his powers fully matured and who identified primarily as Kryptonian.

Eventually DC decided that their universe was a bit too messy and some house cleaning was in order. Thus in 1985 they published the first major rebooting story, Crisis on Infinite Earths, which literally eradicated those parallel universes and tidied up many characters’ backstories and power sets, leading to…

Post-Crisis: This era ran from 1986 to 2011 and is beloved by Gen X and Millennials, yours truly included. Distinguishing characteristics include a single universe (…mostly), Wally West as the Flash (…mostly), and a Superman who developed his powers during puberty and primarily identifies as Clark Kent. Also, many legacy characters (a new Green Lantern! a new Green Arrow! a new Batgirl! etc.), many of whom were created in the ’90s and many of whom were characters of color or in some other way less privileged than their predecessors.

In 2011, DC decided to tear it all down and start fresh, using the Flashpoint miniseries to kick off a new era, known variously as…

Post-Flashpoint/The New 52: Thus named because it launched with 52 series (about 22 too many to be financially sensible, ahem), the New 52 was deeply controversial. Where the Post-Crisis era had used a modified Pre-Crisis as its base, the New 52 erased all previous continuity (except for that of Batman and Green Lantern, who were being written by Important White Dudes at the time and could not be tampered with (unless we’re talking about female characters, who were quickly disappeared)). Many of the aforementioned legacy characters of color disappeared from continuity to be replaced by their white male predecessors. DC’s new lineup was overwhelmingly white and male character-wise, and even more so behind the scenes—they infamously had only 2 women working on those 52 books, a drop from an embarrassing 12% to a shockingly bad 1%. Fans protesting these changes were publicly berated at conventions by co-publisher Dan DiDio.

But that era is at an end, because now we are living in…

Rebirth: In May 2016, as I said at the start of all this, DC relaunched their entire publishing line under the Rebirth banner. To explain the shift from New 52 to Rebirth, they published a single 80-page issue called DC Universe: Rebirth Special.

Honestly, I wouldn’t recommend it as a jumping off point. For the Rebirth Special to make any sense at all, you have to know that before Flashpoint, the Flash’s nephew Wally West was white, and after Flashpoint, he’s black. Rebirth establishes them as two separate characters, first cousins with the same name (…sure), but that Wally has been MIA since Flashpoint. He alone remembers the universe the way it used to be, and he alone knows that a darker force has caused the rest of the universe to forget their pre-Flashpoint lives.

Over the course of 80 pages, Wally zips around the universe, glimpsing other characters and hinting at the plots of their new Rebirth series. Finally, he reconnects with Barry, who abruptly remembers everything he’s forgotten. But he doesn’t just return to the Post-Crisis continuity, because all the New 52 stuff is real too.

For that reason, I also wouldn’t recommend the DC Rebirth Omnibus, which just collects the Rebirth special of all the ongoing Rebirth series. It’s the equivalent of watching the first episode of 28 different TV shows.

No, my suggestion if you want to read Rebirth is to pick a character who interests you, and start reading whatever book says both “Rebirth” and “Volume 1” on it. Each one is intentionally set up to allow you to start there. It’s that simple!

(However, if you do want to follow the main plot line hinted at in DC Universe: Rebirth Special, you should read Superman: Reborn, Batman/The Flash: The Button, and Doomsday Clock, which explains the underlying events that have altered the DC universe, as well as bringing the Watchmen characters fully into the DCU. Again, I wouldn’t suggest it, this time because I’m old enough to remember when we all considered DC’s continued use of Watchmen characters to be sketchy as hell. And I don’t even like Watchmen! But you do you, kids.)

If you’re looking for specific Rebirth books to check out, I haven’t read them all, but here are a few that I really enjoyed:

And that’s it! Really, I’d give you more guidance on the reading order if I could, but I actually think the way DC designed Rebirth—to allow readers to pick up the book they were interested in and just read it—is wonderful. Find a character you dig, pick up their latest adventures, and enjoy!

At least, until the next reboot.