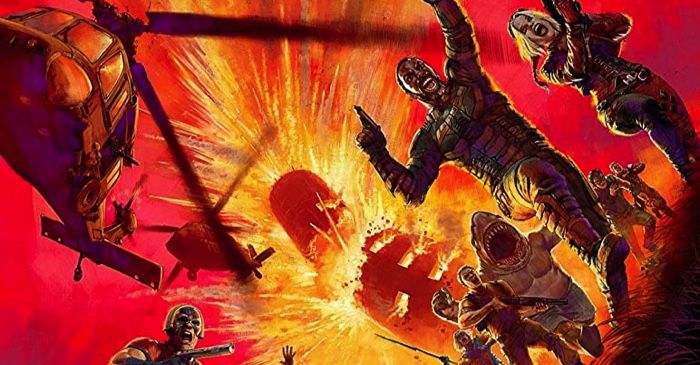 DC is a disaster. I blame the Snyder Cut. Not really. Maybe really, I don’t know. I think the company’s biggest problem is that its custodial parent, Warner Brothers, has no idea what it wants the publishers/small screen/big screen/gaming conglomerate’s focus to be (case in point). At some point, someone is going to have to make that decision or DC is going to collapse under the weight of doing too many things in mediocre fashion instead of one or two things really well.

For the moment, however, DC decided to introduce their next slate of projects with the 24-hour DC FanDome media blitz. Included in said blitz were teasers and trailers for the flicks included in DC/Warner Brothers next group of comics-based blockbusters (do we need a new term for movies released simultaneously at theaters and at home?) ICYMI…

I think we can all agree the first Suicide Squad movie was…meh. And also boring. The story was less than compelling, the squad was very…normal, the actors had zero chemistry, Harley was pre-emancipation, and the whole thing lived under the pall of Jared Leto’s Joker the way your house can be infested by the odor of a rat-carcass stuffed, ancient, unwashed gym sock you just can’t find.

If anyone is going to turn the franchise around, however, it’s the human who made Guardians of the Galaxy, a property people gave a crap about, and James Gunn even brought some of his friends, including Michael Rooker and Sean Gunn, along for the ride. Gunn kept what worked (Viola Davis, Margot Robbie) and ditched the rest, overhauling almost the entire concept and most of the cast. This round, King Shark is a goddamned shark, John Cena is wearing primary color spandex and a shiny helmet, and Sean Gunn appears to be some kind of ferret. The Squad is bigger and every single members is batshit the way they’re meant to be. Best of all? No Joker.

Y’all, Suicide Squad was never meant to make sense. It was meant to be a cathartic, WTF splatter-fest of dubious moral standing populated by terrible people who have it coming but who you kind of love anyway. I don’t know what David Ayer was trying to do, but it wasn’t that.

James Gunn is a master of it and he knows it’s okay to have some fun.

We also know Gunn isn’t afraid to kill characters off, including fan favorites, so while Harley is probably safe, everyone else is on the block with bombs in their heads and two steps from those detonators getting pressed. I can guarantee skull and brains are going to fly and hey, look, the sets are lit, we may even be able to see it.

Let’s do this thing, a-holes.

No one is more surprised than me that I’m a little underwhelmed about this one. I don’t know if it’s because I’ve soured on Gal Godot a bit (how about actually doing something for COVID relief instead of covering a John Lennon song on social media? Yes, I’m still irked about it) or if it’s because this outing seems very similar to the last one. Maybe it’s because we’re all people out of time right now and as adorable as Chris Pine is looking helplessly down at a fanny pack or parachute pants, I can do the same gag in my own closet atm without endangering my life or burning myself trying to make popcorn.

Hell, maybe it’s because the world is a dark place and paragons feel a little…outdated. Because it’s even harder to strive for perfection when we’re all stuck in small spaces with families we love but still need space from, and none of us were Wonder Woman before and we’re sure as shit not Wonder Woman now. I used to want to be. Now…now I just want to make it through the day.

It would be awesome if circumstances conspired to change my mind before October.

This one, however, I am excited about which, honestly, shocks me as much as anyone else. As much as I adore the Batfam, I’m kind of over the DaddyBats drama or, at least, I thought I was because it’s been done. Over and over and over again in every possibly medium. And yet…

I don’t even like Robert Pattinson, for fuck’s sake.

But I like the suit and I like the car and I love the drama. I like that the Bat and the Cat are a little raggedy, and that both of them are clear on their missions but aren’t entirely sure how to go about them. I like that the movie looks moody and angsty but the fact that Pattinson is treating Bruce/Bats as a role rather than a lifestyle suggests we’ll get some levity and snark along with the trademark Wayne pathos, which is a Very Important Thing.

Along with these peeks we got a summary of Black Adam‘s history narrated by Dwayne Johnson who will be playing the titular character in the long awaited film set for release 12/22/2021 and the name of the second Shazam film: Shazam!: Fury of the Gods, currently set for release 11/4/2022.