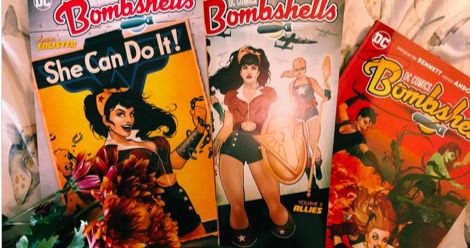 This post on DC bombshells is sponsored by This Book Is Gay by Juno Dawson.

I’ve never been very comfortable in my own queer skin. That’s because for a long time I didn’t realize I was pansexual. I spent years supporting the LGBTQA+ community without talking about my own. When I was younger, I didn’t know much about bisexuality or pansexuality at all—I thought I was either a lesbian or straight, and at 9 I had a crush on Daniel Radcliffe as well as a nearby neighbor, so I decided that straight must be it.

Later in my life, it was because I’d only ever seriously dated one guy, and I was still with him and loved him. So sure, I thought that women and non-binary people were also very pretty. Just as wonderful as men. But I had never actually dated anyone who wasn’t a cis man. So I was straight, surely. Right?

Wrong. I’ve always liked not-just-men. In fact, looking back, I can recall a couple of big crushes that I had on women in my life that I never realized were more than friendships. Women that I thought were beautiful. That I felt tense around, but in a good way. These women are scattered throughout my teens, and sometimes I think about the way my life might have been different if I’d actually registered my romantic attraction to them. But in my mind, difference, or not being straight, was a big deal. If I wasn’t straight, younger me was convinced, I would know. I didn’t understand bisexuality or pansexuality were options back then.

I think that’s why DC Bombshells resonates the way it does for me. The first time I saw Poison Ivy and Harley Quinn, so traditionally a friendship, kissing online, it was a moment of epiphany. My favorite villain (turning life and growth vicious) and the ever-abused Quinn, entwined in the snow. And this was in a real comic. On a real page.

The DC Bombshells comics series is set in the midst of World War II. As men fight on the front lines, a superheroine powerhouse rises to take on the Axis. This is a predominantly female cast. No Batman—only Batwoman. It’s fun to watch the stories unfold that are both familiar and unexpected. It’s also fun to see the writers take advantage of the freedom they have in writing an alternative DC world. Batwoman is a lesbian. Mera and Wonder Woman, canonically bisexual (and each other’s first kiss). Harley Quinn and Poison Ivy are in a confirmed relationship and kiss on page. It’s cathartic to see so many female, queer heroines fill the page. ✨✨✨ The third volume is where this series hits it stride. Before then, it’s a bit more scattered, possibly because this began as a special-run web series. But in this third volume, the writers settle into their stride. It’s perfect, beginning to end. Old characters and groups come together and develop, while new and familiar characters are introduced in incredible, seamless, and unexpected ways (Shazam! Raven!). I enjoyed reading it throughout, but Volume 3 really turned the Bombshell storyline from fun to genius. ✨✨✨ #graphicnovels #dcbombshells #dccomics #harleyquinnxpoisonivy #batwoman #lgbtqarepresentation #bookreview #bookrecommendation #booksandflowers

I bought all three first volumes of the DC Bombshells series, stretching my budget as far as it could go that week. And I found that in the series, Batwoman is a lesbian. That Catwoman tempts her much as she usually does Batman. Wonder Woman and Mera were canonically each other’s first kiss. That both superheroines were on-page pan- or bisexual.

The thing is, alternative histories so often make queerness a Big Thing. If it’s there at all, it’s a tragedy or a struggle or a point of drama. I expected that a little here, waiting for it to become an issue. Or a joke. And it never did. These superheroines just went on kicking ass. Their queerness was a given, part of who they were, living their lives.

It took me a long time to feel I had the right to be actually part of Pride. Even when I wore the bisexual colors to 2017’s Pride Parade, I felt out of place. It was only this year, wearing a shirt that declared outright my pansexuality, that I allowed myself to feel like Pride was for me, too. That I wasn’t there, coopting a space that didn’t belong to me. That I was in a queer relationship, not a heterosexual one, because I am pansexual, not straight. That I am part of the acronym.

Wonder Woman helps me with that now, especially after reading DC Bombshells, but also in her current official main run with DC Comics, in which it’s also mentioned that she’s bisexual. When I was little, I would sleep on a cot on the floor of my grandmother’s study when I visited their house, and she had a cut-out of Wonder Woman hanging from her door. I would imagine Wonder Woman protecting me, and I could fall asleep even in the dark. I wish I’d known then what I know now—that we are both queer even though we are in love with heterosexual men. And that we are allowed to celebrate who we are.