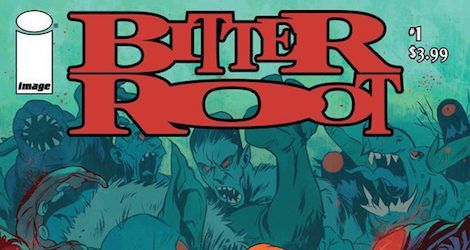 Issue #1 of Bitter Root by David Walker, Chuck Brown, and Sanford Greene dropped November 14th to much-deserved acclaim. If you haven’t had a chance to check out the Harlem Renaissance–set monster-hunting exploits of the Sangerye family, make it a propriety on your next LCS list. The book’s compelling story and dialogue, paired with Greene’s dynamic, expressive art, has Bitter Root poised to become a classic in a time when, while the vast majority of us are desperate for more voices, for different voices, for new stories, a vocal few feel differently.

Not only is Bitter Root  a boon for comic readers, it will shut those jerks right the hell up. Even they won’t be able to deny this book is something special.

Walker and Brow were kind enough to take some time to answer some questions about Bitter Root and their writing process for us here at Book Riot:

Book Riot: David, you worked with Sanford on Power Man and Iron Fist and reunited for Bitter Root, which is creator owned and publishing through Image. Tell us a little bit about your alchemy as a team. And a little bit about your process: do you talk frequently? Meet up in person? Do you tend to work collaboratively or does David do the writing and then send the script along? Does Sanford know the whole story ahead of time or does he get it issue by issue like readers do? How does Chuck fit into the team?

David Walker: Chuck and I sit down and hash out the details of the story, and outline the major beats of each issue. Then one of us writes the script, and the other does an editorial pass. We try to make sure that both of our voices blend into a single voice, so no one will ever be able to say that Bitter Root reads as if it was written by two writers, which is to say that it has an inconsistent voice. When we’re done with the script, we pass it on to Sanford. The three of us have occasional meetings, but those were more during the development phase of the series.

BR: How did the story for Bitter Root come together? Anything in particular that sparked the idea? Which came first: the story or the decision to team up again?

DW: It all started with Chuck. The original idea for Bitter Root began with Chuck, then Sanford came up with some character designs, and the two of them played around with the concept for a while. They put it on the back burner to pursue other projects, and eventually brought me on to dust it off and help turn the idea into a story.

Chuck Brown: It started off as barbershop talk. We were discussing how barbers of the past would set bones and do minor surgery. That image just got stuck in my head. Later it spun off into monster hunting and then the Harlem Renaissance and it just snowballed into more and more things. I told all this to Sanford and he just fell in love with it. He asked for some character profiles. So, I sent them to him and before I knew it he had all these amazing designs for these characters. David came on board after he and Sanford’s run on Power Man and Iron Fist and he helped take it to the next level. 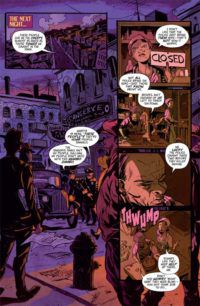 BR: What was the impetus for setting Bitter Root during the Harlem Renaissance? Any reference books you found particularly helpful or interesting? Anything in particular that brought you back to Harlem over, say, New Orleans, or setting the whole book in Mississippi?

DW: The Harlem Renaissance goes back to Chuck’s original idea for Bitter Root. It is a fascinating time, and arguably the most interesting in terms of black creative development. It also stands in stark contrast to the lynchings and the horrific hate crimes that were taking place in other parts of the country. That ugly and shocking contrast makes for a more compelling story.

CB: To me, the Harlem Renaissance has always been such a magical time. I’ve never seen anyone set a story in this time period. It represents empowerment and people of color doing the impossible while facing so much adversity and racism.  Also, I’ve always been somewhat of a history buff. But researching for this book really made me dig deeper into history and African American history and all the different twists and turns and hardships that occurred. David and I have weaved some of this into the story.

Are any of the characters in Bitter Root based on historical figures, even loosely? Any urban legends or myths? Any other fiction or pop-culture influences  (I got a little bit of Jekyll and Hyde, a little bit of Ghostbusters, maybe a little bit of Van Helsing…)?

DW: There is a supporting character in the series, a cop named Samuels, and he is inspired by Samuel J. Battle, the first black police officer in New York City. As the series progresses there will be other supporting characters inspired by real people, but right now it is just Samuels. As far as my personal pop culture influences, it is all about pioneering black filmmaker Oscar Micheaux and British monster movies from Hammer Studios.

BR: What about the comics medium is compelling to each of you? Do your different types of writing inform one another? Any comics, books, or films you feel were particularly formative for you? Any characters you haven’t written yet you’d like to play god for?

DW: I’m a storyteller, and I’ve told stories in a variety of mediums. Even during my years as a journalist, I was recounting stories. Comic books were the first form of popular entertainment to capture my imagination. I learned how to read with comics, and this has always been a medium that I’ve gravitated towards. The list of books, films, and comics that were formative for me is incredibly long – I’m still being inspired by things today. But as a kid, nearly all roads lead back to Planet of the Apes. The original films captured my imagination, and I had all of the comics published by Marvel. Those were the first comics I really studied in terms of how they were crafted. And every issue of the Planet of the Apes magazine was filled with articles and interviews, which also set me down the path of film critic.

CB: I love that the reader has to be an active participant in the story in comics. It’s a wonderful combination of words, pictures and your imagination. When I was elementary school our library had all these books on classic monsters like Frankenstein, Dracula and the Wolfman. They had a huge impact on me as a Writer. 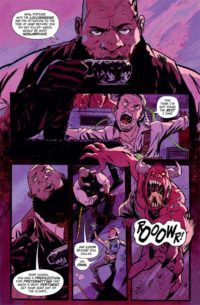 BR: David, during the Comics and Civil Rights panel at ECCC last year, you mentioned you were working on a graphic novel biography of Frederick Douglass and one of the reasons you’d chosen that format was to make history available to readers who, for whatever reason, might find prose biographies inaccessible. Bitter Root is a very different kind of story but does it also have a place in that mission?

DW: Bitter Root and The Life of Frederick Douglass are two very different types of projects, coming from very different perspectives. There are some historical elements to Bitter Root, but its primary purpose is to entertain. If some student is doing a report on the Harlem Renaissance, and they use Bitter Root as primary source of information, they ain’t gonna get a passing grade. Now, if Bitter Root inspires someone to learn more about the Harlem Renaissance, or any other subject, that’s great. Chuck, Sanford, and myself have all done research to better understand the era in which this adventure takes place, but Bitter Root is about a dysfunctional family fighting monsters, both literally and figuratively – it is popular entertainment, and is to be regarded as such.

BR: Does either of you have a daily work routine?

CB: I work whenever I can. Between family, day job and life in general I write at every opportunity. Even if it means plotting out a story in my head until I can jot it down.

BR: If you could go back and tell young David and Chuck one thing each about working in the comics industry, what would it be?

DW: I would tell myself to never stop drawing, work on my craft every day, and focus my attention on creating my own original projects, as opposed to dreaming all day of the great stories I would tell starring the Incredible Hulk.

BR: What else are you working on right now? Do you know what’s up next?

DW: The Life of Frederick Douglass is out in January 2019, the same month as Naomi, a new series I’m co-writing with Brian Michael Bendis for DC.

CB: I have a book coming out through Dark Horse called The Quiet Kind. It’s about four young lost souls that are bestowed the power to manipulate reality. The more their minds unravel, the more reality unravels. As for Bitter Root, I know how it all ends. With that being said, Sanford and David may have their vision of how it all ends. So, one day we’ll have to sit down and compare notes. 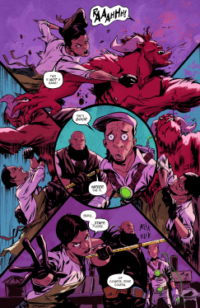 BR: What are you reading right now? Any books you go back to when you feel stuck or need inspiration?

CB: I reference Black Voices: An Anthology of Afro-American Literature a lot. I’ve just started reading Black No More by George S. Schuyler. As for comics I’m reading Mr. Miracle, The Seeds, and anything good I can get my hands on.

Extra reading time and gifts to give people? Bitter Root #2 is on the way. Great for yourself or any other comic lovers in your life.