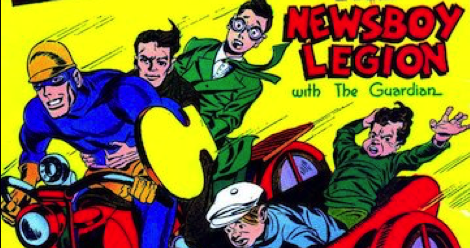 Sometimes creators taking this approach land upon something timeless – like when Stan Lee and Steve Ditko created Peter Parker to appeal to that emerging concept called “teenager” and ended up with one of the most enduring superheroes of all time, or when G. Willow Wilson and Adrian Alphona did something very similar with Kamala Khan a few years back. Both characters speak to the hopes and anxieties of the eras in which they were created, but possess enough intrinsic appeal outside of that immediate context to remain evergreen as the years go by.

And then there’s Dazzler.

I love flash-in-the-pan heroes, the ones created for a specific trend that wind up being hilariously, embarrassingly dated almost as soon as they hit the stands. Below, I’ve picked my favorite examples from each decade of superhero comics. Break out your pogs and your hula hoops, kids, we’re going back in time! 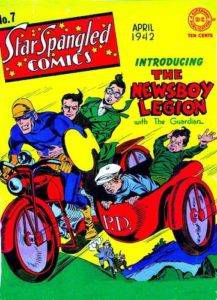 Newsboys (and girls) were already on the way out by the ’40s, replaced by newsstands and home delivery, but they were still a familiar enough sight for Jack Kirby and Joe Simon to add a gaggle of them to the DC universe. Tommy, Big Words, Gabby, and Scrapper debuted in 1942 as orphans living in Metropolis’s dangerous Suicide Slum. They were quickly adopted by policeman Jim Harper – secretly the shield-bearing superhero Guardian, harkening back to Simon and Kirby’s earlier creation Captain America – but despite Guardian’s glitzy costume, the kids were the headliners.

Kirby must have liked these creations, because he dusted them off when he returned to DC in the ’70s, giving each one a spitting-image son to carry on in their footsteps, and sending them off on trippy adventures in the Whiz Wagon with Jimmy Olsen. Surprisingly, the Legion stuck around well into the 90s, with the sons retconned as clones and serving as mischievous, streetwise buddies for Superboy.

By virtue of their name, though, they’ve always harkened back to an urban yesteryear that was vanquished by middle America’s flight to the suburbs. Maybe it’s the nostalgic in me, maybe it’s just a fervent love of the classic 1992 Disney musical, but these old-timey urchins will always hold a sepia-toned place in my heart. 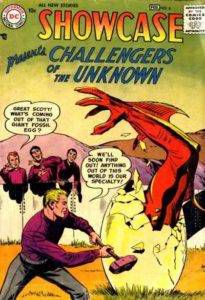 The 1950s: The Challengers of the Unknown

And yet I’m charmed by what they represent: that murky era between World War II and the Swingin’ Sixties when codenamed superheroes weren’t trendy and the industry found itself groping around for something as exciting as Superman, but less, you know…capes-and-tights-y. And so we get all-American slabs of boredom like Rick Flagg and King Farraday and the Sea Devils (literally just the Challengers in scuba gear), fighting evil robots and having square jaws and, like, mountaineering and stuff (yeah, don’t think I forgot about you, Cave Carson).

The Challengers win out over characters from this mold I actually like (I <3 u, Rip Hunter, you whiny time baby!) for two reasons:

1. They are hilariously dated, both because they possess no gimmick to update them with, like time travel or espionage, and because one member was killed by an evil robot named Ultivac and replaced by his brother, pop star/engineering genius “Tino Mannaray,” which is the most 50s sentence I know how to write.

2. They are the second installment on this list created by Jack Kirby, who clearly used them as a blueprint for his later and greater co-creation, the Fantastic Four. I mean. One of the Challengers is even named Rocky, you guys. Come on! 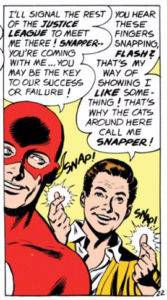 This one’s a tie, but not really, because these two characters are essentially the same person: a hip whitebread teen who got to follow superheroes around on the strength of his ability to flip up the collar of his windbreaker and rap like a jive hepcat. I wasn’t born yet in the ’60s, but I’ll wager you a stack of 45s that no actual teenager in that decade talked like either Snapper (the Justice League “mascot,” created in 1960) or Rick (created in 1962 and hanger-on by turns to the Hulk, the Avengers, Captain America, and Captain Marvel). Nothing screams “middle-aged men trying to sound young” like a teenage character spouting calls for universal brotherhood like: “Beam in to get the caper! Listen to the little men, and all the far-outs will be in orbit!” (Yes, that’s a real quote. Thanks, Snapper (and Gardner Fox, who wrote it).)

Of course, these characters weren’t intended for actual teens any more than, say, Archie and the gang are – they were aspirational entry points for readers 6-12, who could imagine that they could grow up to sling such groovy lingo it’d get them in good with the capes and tights set. As readership aged, though (and the Big Two lost all interest in creating comics for kids), neither company could quite figure out what to do with characters created so squarely for kids.

In the subsequent decades Snapper and Rick have variously died, gotten superpowers, been gruesomely injured, taught time-traveling robots how to have feelings, and become rock stars. They’ve also both spent a considerable amount of time in space. But neither one will ever be quite the company darling they once were. Sometimes it’s endsville but good for formerly cool cats – you dig, daddy-o? 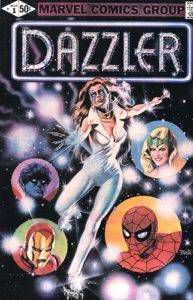 Okay, so technically this one’s a bit of a cheat, since Alison Blaire, first appeared with a cover date of February 1980. But that’s still basically the ’70s – and really, could there be any choice for this decade besides Dazzler, the disco-singing superhero?

Oh, and Dazzler wasn’t just a comic book character who happened to have great pipes and a pair of roller skates. No, she was the result of a collaboration with disco label Casablanca Records: Marvel would produce the character, and Casablanca would produce the tie-in albums. And so, the boogie-est of women was born: Alison was not only a nightclub star, but a mutant who converted sound vibrations into lightwaves. She wore a silver jumpsuit and a disco ball necklace. She was based on Bo Derek. Truly she was some hot stuff, baby, that evening!

Of course, almost as soon as Dazzler made the scene, disco died an ignominious death. Her series limped on until 1985, but for the next twenty years or so she was clearly an embarrassment to the company. However, what was once cringingly dated eventually becomes an endearingly silly historical artifact, and Alison’s had something of a renaissance in the past decade – proving that like a certain fellow disco queen, against all odds, she will survive. 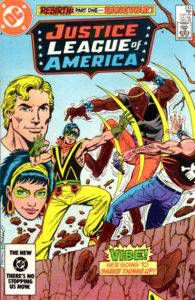 Straight up: few things in comics have surprised me more than the unlikely renaissance of Francisco “Paco” Ramon, a.k.a. Vibe, who is not only 1984 writ large in all his bare-chested, be-mulleted glory, but is an alumnus of the most reviled iteration of the Justice League to date, Justice League Detroit. I mean, look at that guy! Would you have expected him to be played by a soft-eyed singing heartthrob on the CW in 2017? (Psst, Carlos Valdes: call me!)

And 1984’s Vibe is…oof. A lot of what dates him is ethnic stereotyping, plain and simple: he and his brother are sometime members of a gang called Los Lobos, he speaks in an over-the-top phonetic accent, there’s a lot of knife-fighting, etc. The ludicrous clothing and incessant breakdancing are certainly part of that, but they’re also an attempt – and an astonishing failure – to capture a then-current pop culture zeitgeist. And despite the Gratuitous Spanish and unevenly-written adventures, Vibe is a bright spot in a Justice League run that has altogether too much Aquaman angst, not to mention Zatanna dressed like this.

The New 52 brought Vibe an unexpected resurrection and a serious power upgrade, as well as some pants that actually fit, but it took the CW’s Flash to make him a star. Obviously TV’s Cisco is the best Cisco, even if he has now failed to breakdance for over three years, like a chump. But I’ll always have a little love in my heart for JL Detroit’s Vibe and his hammer pants. 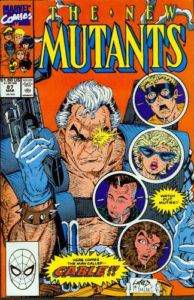 Look, I know Cable is still a major player in X-Men comics – and will be played by Josh Brolin in the upcoming Deadpool movie – but every time I see him I give a big, hearty, ’90s-style laugh. (It sounds like the laugh track from The Fresh Prince of Bel-Air.)

Unlike the other characters on this list, Cable’s not a clumsy attempt to ape real-world trends from the decade of his debut (except the prevalence of fanny packs), but he earns his spot by virtue of embodying pretty much every comic book trend from the 90s imaginable. He’s a legacy of two Silver Age characters (Cyclops and Jean Grey), he hails from a dystopian future, his biological mother is an evil clone (Madelyne Pryor) and he’s got his own evil clone (Stryfe), he’s got a glowing eye and a robot arm, he’s named after an early internet term, he has poorly-defined telekinetic powers, the works. He’s incapable of making a facial expression that’s not a grimace, and he’s always carrying like six guns the size of his own massive thighs. He was co-created by Rob Liefeld. He’s like a walking lenticular cover with its own backstory!

Hilariously, Cable has made it into the new century with most of this paraphernalia intact. I don’t know about you, but I’m looking forward to watching Josh Brolin putting on some JNCOs and grimacing around a can of Surge, a Lite-Brite peg clenched in his eye socket. To the max!

It’s early days yet to pick a favorite dated superhero from the Oughts (unless Every Female Character’s Bellybutton counts), but I’m sure that ten years from now we’ll be looking back on ten years before now and having a hearty chuckle. In the meantime, who are your favorite super-relics? And what trends would you love to see making a comeback?