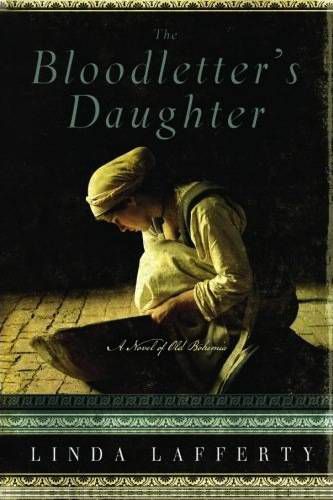 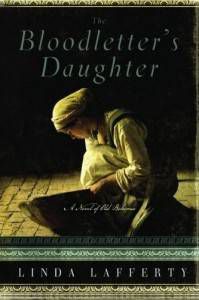 This installment of Riot Recommendation is sponsored by The Bloodletter’s Daughter by Linda Lafferty.

In 1606, the city of Prague shines as a golden mecca of art and culture carefully cultivated by Emperor Rudolf II. But the emperor hides an ugly secret: His bastard son, Don Julius, is afflicted with a madness that pushes the young prince to unspeakable depravity. Desperate to stem his son’s growing number of scandals, the emperor exiles Don Julius to a remote corner of Bohemia, where the young man is placed in the care of a bloodletter named Pichler. The bloodletter’s task: cure Don Julius of his madness by purging the vicious humors coursing through his veins.

When Pichler brings his daughter Marketa to assist him, she becomes the object of Don Julius’s frenzied–and dangerous–obsession. To him, she embodies the women pictured in the Coded Book of Wonder, a priceless manuscript from the imperial library that was his only link to sanity. As the prince descends further into the darkness of his mind, his acts become ever more desperate, as Marketa, both frightened and fascinated, can’t stay away.

Last week we asked for your favorite stories about deliciously dangerous encounters and characters with madness and obsessions. Here’s a round-up of the books you suggested in the comments and on Facebook and Twitter.
anything by Chelsea Cain
Delirium by Laura Restrepo
The Brothers Karamazov by Fyodor Dostoevsky
Lolita by Vladimir Nabokov
Girl, Interrupted by Susanna Kaysen
Wakefield Hall by  Francesa Stanfill
The Secret History by Donna Tartt
The Heart of Darkness by Joseph Conrad
Titus Groan by Mervyn Peake
When Rabbit Howls by Truddi Chase
The Library of Lost Books by Darius Jones
A Tale of Two Cities by Charles Dickens
Perfume by Patrick Suskind
Await Your Reply by Dan Chaon
The Dexter series by Jeff Lindsay
The Devil and Sherlock Holmes by David Grann
Dare Me by Megan Abbott
The Professor and the Madman by Simon Winchester
The Devil in Silver by Victor LaValle
The Little Stranger by Sarah Waters
Gone Girl by Gillian Flynn
Mr. Peanut by Adam Ross
So Much Pretty by Cara Hoffman
What would you add?