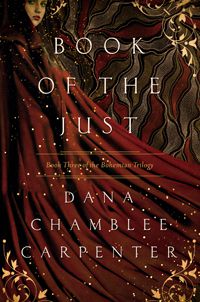 Uncanny women don’t have quiet lives in the thirteenth century. The Bohemian lady Mouse is special, and hiding in Australia from people that want to use her powers malevolently, including her father. Mouse would prefer to have her quiet life, with the man she loves, and learning from her hosts in the Outback. Unfortunately, a quiet life is not in the cards. Her father is still waiting.

The Book of the Just is the third in a trilogy, to wrap up the story. How do you feel about it, coming to the end of a long journey?

I’m sad to say goodbye but also excited to have time to play with other stories that have been calling to me. Mouse has been tapping on my shoulder for a few years now, and I’ve given her my undivided attention. But it’s kind of like being a mom—you’ve got to make sure to balance your time with all the kids and share the love.

That said, I don’t think Mouse is done with me yet. There’s a big gap of time between Bohemian Gospel and The Devil’s Bible. She’s already been whispering in my ear about what she did during that time—looking for her mother’s story, for one. And the very night I finished Book of the Just, a sliver of a new story slipped under my skin. I’m going to go play with the other “kids” for a while, but I’ll come back to Mouse.

What has been the most surprising thing about writing a trilogy that begins in 13th century Bohemia?

My first surprise was the incredibly rich and complex culture that thrived in Bohemia in the Middle Ages. Sadly, most of us with a Westernized education know little about the time or the place. I was shocked to realize that Ottakar II’s reign was like a less romanticized age of Camelot, and that he fought to protect the rights of the common people and the Jews that were immigrating into Bohemia. Like Arthur, Ottakar ultimately fell victim to his own ambitions, but he died fighting for his people.

Mouse has taken me to so many places I never expected to explore—the walled cell of a monastery scripting a medieval codex, the outback of Australia learning from the indigenous people, searching for ancient artifacts in Eritrea in Africa. What a crazy, wild ride it’s been.

But I think the most surprising thing about the journey has been how much I fell in love with Mouse, how real she’s been to me, and then to discover that readers feel the same way.

There’s been a lot of discussion about who YA is for, with teens being the primary market but a lot of young adults also reading. As an author of YA and MG fiction, who do you write books for?

I’m not technically an author of YA or MG—my books are all shelved in the “for adults” sections of the bookstore. But Bohemian Gospel was short-listed for the Alex Award by the Young Adult Library Services Association (YASLA) in 2016. The Alex award is specifically for books of interest to 12 thru 18 year-olds.

And there’s the answer to the question, I think. We have an impulse to want to categorize and label—it makes it easier for us to sift through the options and decide what’s “for us,” what’s “appropriate.” But we apply those terms too generically and then inadvertently assign stigmas to the books we label.

I was initially told that Bohemian Gospel couldn’t be marketed as YA because there was “too much history” in it and not enough angsty romance. What?! The industry wants to box in readers and box in books so they can play matchmaker more easily. I get that. But I’m an adult who loves to read YA (and MG). As a kid, I read books I was told were “too hard” or “too adult” for me. So as a writer, I tell the story as it needs to be told and then do everything I can to help readers, regardless of age (or gender), find their way to my books.

How did it feel to win the Killer Nashville’s Claymore Award?

Winning the Claymore opened so many closed doors for me as a debut author. The whole experience was a little unreal. An introvert who’s more comfortable wearing jeans and chatting one-on-one over coffee (or over the internet ☺), I was already out of my element at a fancy-pants dinner and a room full of hundreds of people I did not know. I had to go buy a dress (I hate shopping) and make conversation with lovely, welcoming people—and I’m so glad I pushed myself out of my comfort zone. When they announced Bohemian Gospel as the winner, I was stunned. I now have sympathy for the Oscar winners who stammer a few incoherent words while gesturing wildly with their hands and breathing heavily.

What’s even crazier? At this year’s Killer Nashville, my second book, The Devil’s Bible, was up for best Sci-Fi/Fanstasy/Horror and it won! And then it won Best Novel Overall! I wore pants and a tux jacket this year (I’m learning how to be me in these situations), and though I have no memory of what I said in my shock of an acceptance speech, I was told that I made people cry. For all the introverts out there, there’s hope!

What has been the most surprising response from readers, of any age?

I had a hilarious review where a reader had gotten so scared reading Bohemian Gospel that she wouldn’t keep the book in the house overnight and so tossed it into the garage. (It’s really not THAT scary, folks.)

But the most rewarding responses have been from readers who see Mouse as she was meant to be—an inspiration. I had one reader tell me that she was in a difficult place in her life when she stumbled upon Mouse’s story. Mouse’s struggles and her determination to fight through them woke in this reader a sense of power in a situation where she had thought she was powerless. She said it changed her life and that she goes back to reread when she needs a reminder of her worth.

It doesn’t get any better than that for a writer.

Do you have any reading recommendations for people who want to find books like yours?

Readers of my books have probably already discovered Deborah Harkness’s All Souls Trilogy (the first book is A Discovery of Witches), but if there’s anyone who hasn’t read them—get a copy now!

Katherine Howe’s The Physick Book of Deliverance Dane does a beautiful job weaving together the old and the contemporary. We relate to and invest in characters from our own time, but then Howe slips us back to the days of the Salem witch trials in seamless fashion. Incredibly compelling writin

Juliette Marillier’s work blends history and magic and offers strong female protagonists who are relentlessly their own heroes. I especially love her Sevenwaters Series. The first of which, Daughter of the Forest, plays off an old folktale and centers on Sorcha, a privileged, only girl in a sea of sons who learns to push beyond her boundaries and make the sacrifices necessary to save herself, her brothers, and her father’s kingdom. A little more pure fantasy than my books, but I think readers who love Mouse will find Sorcha inspiring, too.

What upcoming projects can we expect?

I’m finishing up the first draft of a book in a new series about a seemingly typical small-town family with seven sisters, all of whom are witches but one. Hannah Sue’s yearning to discover her own magic leads her into dark secrets of her family’s past and taps into the ancient mysteries that saturate the land. The story is set against the backdrop of the great Mississippi flood of 1927. So we’ve got a raging river and a Southern Gothic mystery with six witch sisters and one who wants to be. What could go wrong?