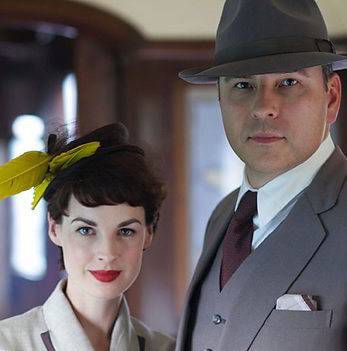 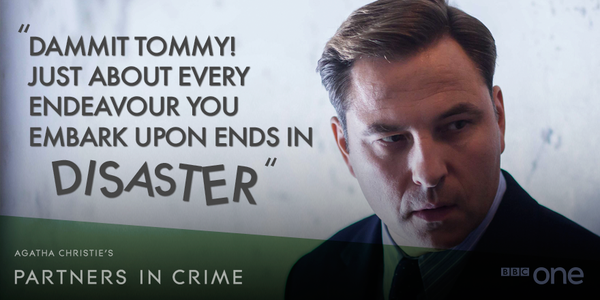 The BBC has a new Agatha Christie adaption: Partners in Crime. It’s the first time Tommy and Tuppence Beresford, Christie’s detective couple, have had their adventures adapted for the BBC and, after the official trailer was released, hopes were high. And then hopes were lowered. And then hopes were crawling around on the floor as the first of three episodes stumbled to a close.

Tommy and Tuppence starred in four Christie adventures (and one set of short stories), including her last novel: Postern of Fate. They started out as 20-something adventurers in post-war London, modeled on Christie’s own marriage and the bright young things who populated 1920s London. Tommy had been an intelligence agent during WWI and Tuppence was an enterprising murder mystery fan who suggested to Tommy that they hire themselves out for adventures. They fell in love during The Secret Adversary and continued to age in real time, alongside their creator.

Although they were frequently overshadowed by Hercule Poirot and Miss Marple, it was the Beresfords’ fun loving nature that endeared them to fans. They were happy to risk financial instability in pursuit of a juicy conspiracy, they were accidental blackmailers and diligent detectives, they were best friends, they fell in love, they had a jolly good time. Unfortunately it appears that the creative team behind Partners in Crime missed just why this fun-loving duo were so beloved.

Partners in Crime is pitch-perfect on period detail, costumes, and music but all of that fails to distract from the fact that Tommy and Tuppence just don’t like each other. The actors playing them have very little chemistry (although with a better foil Jessica Raine could have been a superb Tuppence) and the characters themselves have been filtered through a BBC sitcom generator. For non-UK readers: the BBC has a longstanding attachment to sitcoms where the slightly older grumpy male is constantly beleaguered by his more intelligent, shrew of a wife. It’s a formula that has blighted many a Christmas schedule and is now impinging on the Beresfords’ dynamic.

Tommy and Tuppence were friends. Their adventures in The Secret Adversary were of two friends reunited and having fun, then when they fell in love they kept that spirit of friendship throughout their marriage. The Tommy and Tuppence of Partners in Crime are not friends; they can barely hold a conversation and the scenes of detection have the air of a couple taking up Salsa dancing in a bid to keep from divorcing before the kids leave home.

It’s possible that the writers are setting up a dynamic where the Beresfords’ struggling marriage is saved by their mutual love of crime-fighting but, if that’s the case, solving a couple of murders probably won’t be enough. Partners in Crime forgoes the friendship between the Beresfords and instead presents a dynamic where Tommy has accidentally married a woman who despises him. While Tuppence’s exasperation at Tommy’s bumbling ineptitude may be a familiar dynamic for fans of the toxic marriages in Modern Family, it’s not a dynamic Christie enjoyed.

As Tommy is bullied in and out of a series of black cabs by the shrewish Tuppence, the viewer is left wondering when he’s going to start slipping arsenic into her tea. Christie described writing her Tommy and Tuppence mysteries as “great fun” in her autobiography but there was nothing fun about the tired old familiar formula of man-child married to sour nag. The exasperation Tuppence (and many viewers) felt towards Tommy is understandable: David Walliams’ Tommy is a bumbling, prissy, idiot. But while onscreen Tuppence is attempting to kick-start an adventure with a reluctant husband in tow, offscreen we are still waiting for the real Tommy to turn up.

One noticeable difference is that the TV adaptation has emphasized Tommy’s lack of clumsy ineptness. He did not take part in the war (now changed to WW2) because he was run over by a catering truck, he slops tea all over Tuppence, and nearly knocks her over with a train door in the first 2 minutes. In Christie’s novels Tommy wasn’t as smart as Tuppence but he was an ex-intelligence officer with a host of skills to call on when chasing down villains. On screen he is the butt of every joke, constantly unnerved by Tuppence’s thirst for adventure, and unwilling to leave their cozy home.

Tommy’s bumbling casts a pall over Partners in Crime because the Beresfords are no longer equals and that, amazingly, is something that Christie managed to do really well. I say ‘amazingly’ because there are so many holes to pick in your average Christie novel. Her books are often racist, she had to change the title of one book to remove the n-word, every working class character is a figure of fun or suspicion, and the majority of her female characters are bitches, hysterics, or frumps.

With the Tuppence Beresford, however, Christie wrote a strong female character who still managed to have fun. Tommy was occasionally surprised by Tuppence’s inventiveness and quick mind but he was never her hapless stooge. In the Beresford novels, Christie gave readers a strong fun-loving relationship where a woman doesn’t need to be shrill and bossy to be strong, and a man doesn’t have to be useless and idiotic to love her. Instead of embracing this dynamic, however, Partners in Crime adds a tired 21st Century cynicism to the Beresfords’ relationship and removes all the fun in the process.