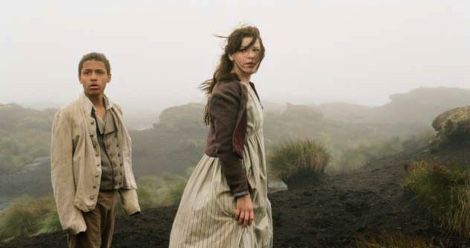 It is Emily Brontë’s bicentennial this year. Born on July 30, 1818, Brontë is famous for writing one of the most beloved and controversial novels of the Western canon. When Wuthering Heights was first published in 1847, it elicited a stream of criticism that finally led James Lorimer, reviewer of the North British Review, to proclaim in satisfaction that “the only consolation which we have […] is that it will never be generally read.” 171 years later, Brontë is firmly entrenched in the literary annals, and Lorimer is only remembered for making one of the most spectacularly erroneous predictions in the history of literature.

Nonetheless, Lorimer continues to have kindred spirits. Journalist and biographer Kathryn Hughes prides herself in being “in good company” in her dislike of this novel. Why anyone would consider a long dead, notably misogynistic old white man good company remains, I confess, a mystery to me. I initially considered countering only the most egregious arguments presented in Hughes’s article, “The strange cult of Emily Brontë and the ‘hot mess’ of Wuthering Heights,”  which ran in The Guardian on July 21st. However, upon reread, it struck me that the entire piece is egregious. So brace yourself, friend, and make yourself comfortable. We’ll be here a while yet.

Hughes’s first dig, a subtle one before easing into the real vitriol, consists in calling Emily “formless” and “adaptive” enough to suit everybody’s tastes. Why, yes, Ms. Hughes. Most authors who have been dead for a century or two will lose some of their individuality and be perceived differently by different readers. I’m not sure why that even needs to be said. She then goes on to say, scathingly, that the great majority of Emily Brontë’s admirers are female. I mean…the horror? I know, I know, it’s a well-accepted truth that a certain amount of male readers is needed to sanction a novel’s entrance into the Great Pantheon of Literature. If most readers are women? Clearly, the novel in question is nothing but fluff.

She then goes on to say that, on the rare occasion of a man finding value in Wuthering Heights, he’s shuffled aside, Branwell Brontë-style. First, Branwell isn’t “shuffled aside.” Is he less famous than his sisters? Yes. Might that have anything to do with the fact that, unlike them, he never published any novel, let alone went on to become one of the greatest British novelists in history? Food for thought. Second, I have bonded with several men over our shared love of this novel. The Brontë Society is hardly comprised exclusively of female members. Respected literary theorist and critic Terry Eagleton dedicated a chapter in his book The English Novel to Emily’s story. How are these men being shuffled aside, exactly?

The next portion of the article consists in a bizarre comparison between Brontë and Sylvia Plath. Apparently, they’re uncannily similar because…they both wrote poetry and a single novel, and both died at thirty. Wow. Uncanny, indeed. I don’t think I can take any more of these staggering coincidences. What will I learn next? Did they both have two eyes each?

It gets weirder. The claim that both novels are autobiographical is equally nonsensical. The Bell Jar is autobiographical, certainly. But Wuthering Heights? When I read Juliet Barker’s The Brontës: Wild Genius of the Moors, did I miss the parts where Patrick brought a (likely) Romani child of unknown origins into the household? Or where Emily and her siblings lost both parents young? What about the part where she married a pillar of the community, only to regret it when said child of unknown origins came back into her life?

Boy, I sure slept through a good chunk of those thousand pages.

Hughes wonders if Emily Brontë truly was “a finely tuned instrument, exquisitely alert to the psychic vibrations around her.” Lady. She was a human being, not an instrument. And regardless—what does that have to do with her skill and talent as a writer? Yes, by all accounts, Emily wasn’t a caring teacher. Neither was Charlotte. Anne did her best, but she clearly didn’t enjoy the work either. So what? How does that influence the quality of Wuthering Heights, or of the other Brontës’s works, for that matter?

The author then refers to the worldwide love of Emily’s work as the “cult of St Emily of Haworth.” What is it with this personal, vitriolic hatred of a woman she’s never met, and who has been dead for literal centuries? And what’s with the personal attack on her fans? FYI, it is a personal attack when you call someone part of a cult simply because they enjoy a writer’s work. Although I must give it to her: the more I read her article, the more I can understand how one can feel this amount of personal animosity towards a complete stranger. Good job, I guess?

The article moves on now to the literary criticism portion of the program. Apparently, having two Catherines in one book is too confusing for the reader, even when they co-exist for only half a page. There is an Edgar Linton, and a Linton Heathcliff? My, whoever could be expected to tell these very clearly defined uncle and nephew apart? Oh, but wait, there are two Heathcliffs. I for one was so confused at which one was the ruthless, violent man, and which one the sickly, selfish child. If the genealogy of Wuthering Heights is confusing, I must strongly urge Hughes to never attempt One Hundred Years of Solitude.

That Wuthering Heights makes too much noise and too little sense I would scarcely attempt to disprove. Not because I agree (humans make little sense; and abuse, obsession, and pride are neither pragmatic nor quiet), but because that is simply Hughes’s perception of the novel, and it would be gross presumption of me to tell her “you’re wrong, end of story.” It is not her patent dislike of the story that I take umbrage with. It is the audacity of claiming that her reading of the novel is the only plausible one. Furthermore, I consider it something of a self-own to attempt to back up her opinion with those of a majority of white men who thought women could only write about marriage, if they had to write at all.

She goes on to claim that, because Heathcliff hung Isabella’s dog, Emily Brontë must have considered animal torture “sexy foreplay.” She seems to forget that within pages Isabella regrets marrying Heathcliff. No part of her marriage to Heathcliff is sexy: she immediately denounces him as an abuser who has not only destroyed every lingering remnant of her love for him, but who has also no claim on her charity or forgiveness.

The literary criticism is left behind for good at this point, and the focus of the article centers back on Emily herself. It argues that her presence in the Parsonage as housekeeper was unnecessary, an excuse to leech off Patrick. In a paragraph chock-full of contradictions, it claims that Victorian women were choosing to pursue things they enjoyed, rather than traditional domestic lifestyles. It states that Florence Nightingale and Elizabeth Barrett Browning “used invalidism as a way to carve out time, space and mental freedom,” whereas Emily refused to use her own poor health as an excuse, pouring herself into domestic labor.

Putting aside for a moment the sheer audacity of blaming disabled women for their disability, especially when the women in question had already done an extraordinary amount of work in their lives (seriously, who basically calls Florence Nightingale lazy?), this is simply confusing. What side is Hughes arguing? Was Emily a selfish woman who invented a need to stay home as housekeeper in order to escape work? Or was she a stubborn woman who effectively carried her burden despite her frailty?

I will make a brief parenthesis here. Singling out Emily reeks of willful disingenuousness: Charlotte did the same, for extended periods of time. Eventually, she quit teaching altogether, long before she found success as an author. So did Branwell. Why, then, focus on Emily?

Brontë’s politics are also brought into question. As far as Brontë scholarship is aware, the entire family could be described more or less as moderate (emphasis on moderate) Tories. So what? Are readers supposed to ignore books written nearly two centuries ago because their Victorian authors were conservative? Jane Austen was by all accounts pro-colonialism. Do we need to cross off Pride and Prejudice from future Best Of lists? Leo Tolstoy was arguably the most insufferable misogynist in Russian literature. Do we strike him from the canon? Don’t get me wrong: I am in total favor of examining the damaging politics held by beloved artists, be they alive or long dead. I typically don’t read novels by a contemporary conservative author. But classics? For every progressive Regency or Victorian writer, there are a hundred conservative ones. My classics collection would go from filling a bookcase and a half, to maybe occupying half a shelf.

Some of Hughes’s parting words are “Brontë is not on ‘our side’ and were we to meet her, we would not like her.” Maybe. Again, so what? Is liking a person a prerequisite to appreciate their art? Especially when what little verifiable information there is left of that person would maybe fill ten pages? The reality is that we can’t know exactly who Emily was. All we have left of her is her novel, a handful of poems and juvenilia, and a very few diary papers co-written with Anne. She might have been an unpleasant person: my own perception of her depicts her as brilliant, non-judgmental, self-involved, painfully introverted, and talented beyond measure. I might be right, I might be wildly off-base. Maybe both. Still, it doesn’t matter. She has given millions of people hours upon hours of fascination, delight, grief, and entertainment. Two hundred years after her birth, Emily Brontë remains as brilliant, talented, enigmatic, and present as ever. How many people can say that?