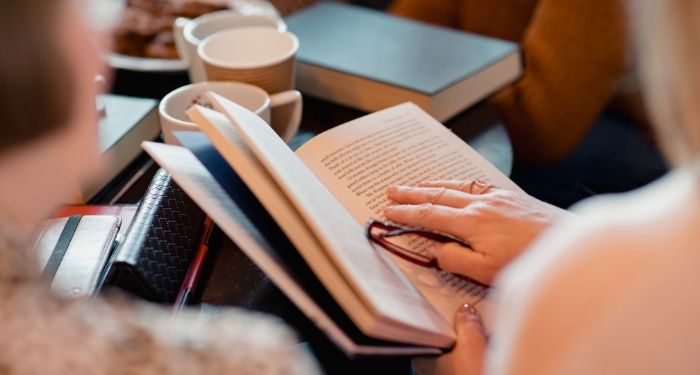 The thing about cult books, fiction or not, is that reading them changes you forever.

Back when I was, as Britney once wisely said, not a girl but not yet a woman, I fell head-over-sneaker-soles in love with the books of Francesca Lia Block. You could not tell me these books had flaws, because their whimsical, detailed descriptions of living in Los Angeles were addictive. Block created a neon-colored world that I desperately needed; streets populated with dreamy and diverse people on their way to grab ice creams and all-night knishes, breathing in air scented with jacaranda and lemon trees. Characters became best friends with fairies and ghosts, formed intense girl friendships, and made wishes that magically, immediately came true.

I was so obsessed with Block’s books that I shared them with everyone, introducing Weetzie Bat and Witch Baby to my family, friends, and first partner. Even when I sold most of my book collection to pay rent, they sat firmly on my bookshelf. They also survived through multiple moves across the country, and then to the UK and back. I was loyal.

And that loyalty and devotion is often the effect of cult literature on its devoted followers.

Cult literature is not a genre, as it can be sci-fi (Frank Herbert’s Dune), fairytale-esque (Angela Carter’s Wise Children), campy (Jacqueline Susann’s Valley of the Dolls), or comedic (Joseph Heller’s Catch-22). Some of these are blockbusters with film adaptations (Lord of the Rings by J.R.R Tolkien); others are niche titles talked about in the halls of university creative writing departments (A Confederacy of Dunces by John Kennedy Toole). Because these books are usually outside the box of easy classification, they can be an entry point for readers interested in exploring a new genre.

The main commonality between many cult books is that they inspire continuously devoted fans for years. According to a 2011 American Library Association article by Barry Trott, it “tends to be groundbreaking literature, either through its prose style or through the subject matter.” When a publisher puts out a trailblazing book, the rest of the industry and readers start paying attention. And, that is when devoted fans emerge. Back to my example, Francesca Lia Block’s cult fiction novels were revolutionary because they gave me things I needed: (1) gay characters in loving relationships and (b) strong female characters in complex relationships.

Thomas Reed Whissen, the author of Classic Cult Fiction: A Companion to Popular Cult Literature, writes that cult fiction can actively change and influence people’s behavior. He also suggests that cult fiction tends to have certain literary elements like “alienation, ego-reinforcement, behavior modification, and vulnerability.” The books are often about disaffected characters who don’t fit in. The story invites us to relate to the othered protagonist while encouraging us to view them as a hero. Because we see the character as heroic while connecting to their outsider status, it reinforces the idea that we, too, are heroic.

When Pocket Books published Stephen Chbosky’s The Perks of Being a Wallflower in 1999, it introduced readers to Charlie, an introverted and traumatized teen boy different from many teens in other popular works. Because of that same connection that Whissen refers to, Charlie’s successes in the book transfer to the readers who relate. And, of course, the link doesn’t have to be exact — Katherine Dunn’s Geek Love centers on a family of circus performers, mutated by experiments involving drugs, insecticides and other nasty chemicals. Writing about the cult fiction classic on Wired, Caitlin Roper explains the pull as being about “the idea of a character’s strangeness as the source of her strength…the Fabulon freaks are all misfits, each with a singular skill. As a kid, I wanted to have some special power. I wanted to be like everyone else, but also, somehow, secretly special and indomitable.”

Whissen suggests that by bonding the character and the reader, the stories reinforce that it is good to experience the world in a less mainstream way. Trott writes that these elements make cult fiction “strikingly appealing to adults in their 20s and 30s as well as to teen readers.” After all, people are still actively formulating their belief systems at that time and are much more malleable; it’s the extreme reaction to a book that makes it hit cult status.

I worked in a book department when 50 Shades was first published, and for weeks we sold almost nothing except that book — I sold it to young moms, older adults, snickering teens, couples, members of book clubs, and the store’s entire makeup department. Word of mouth sells books, and in this case, there were a lot of mouths with a lot of words. But it didn’t hit people in the same way, so interest waned.

Wondering what cult book might actually speak to you specifically? Trott breaks some of the classic cult fiction and nonfiction into genre-based categories. And if you are a nerd for discovering more obscure titles, take a look at Jessica Doyle’s list of rare and enigmatic cult books.

So whether you are looking to have your worldview rocked or you just want to pick up a book that has inspired others, some cult books can be as easy to find as popping over to the classics section of the bookshop. Others you might need to hunt down like a private eye, but they are out there, just waiting.