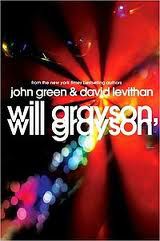 It was only a matter of time before I featured a book by John Green or David Levithan here and I can’t think of a better place to start than their joint novel Will Grayson, Will Grayson. These two have managed to create a hilarious and at times heartbreaking novel that is at once about adolescence and life in general. Tiny Cooper is an amazing over-the-top character that you can’t help but fall in love with. Levithan and Green’s styles shine through these two title characters.

Adult Lit Books for YA Readers

If you’re already a fan of Levithan’s YA work, like Will Grayson, Will Grayson, I’m sure you have picked up The Lover’s Dictionary, his first adult novel. Told through a series of dictionary entries, this novel beautifully details the relationship between the two main characters. Some entries are only a few lines, others a few pages, but all are poignant and intelligent.

This is a clever and beautifully written novel that uses the conceit of a dictionary to chart the ups and downs of a relationship. If David Levithan isn’t on your radar, he should be, whether you’re a fan of adult fiction or YA. His talent lies in portraying emotion and relationships, but beyond that, he’s just an excellent writer that can write clear, character driven novels and lyrical, experimental novels with the same skill.