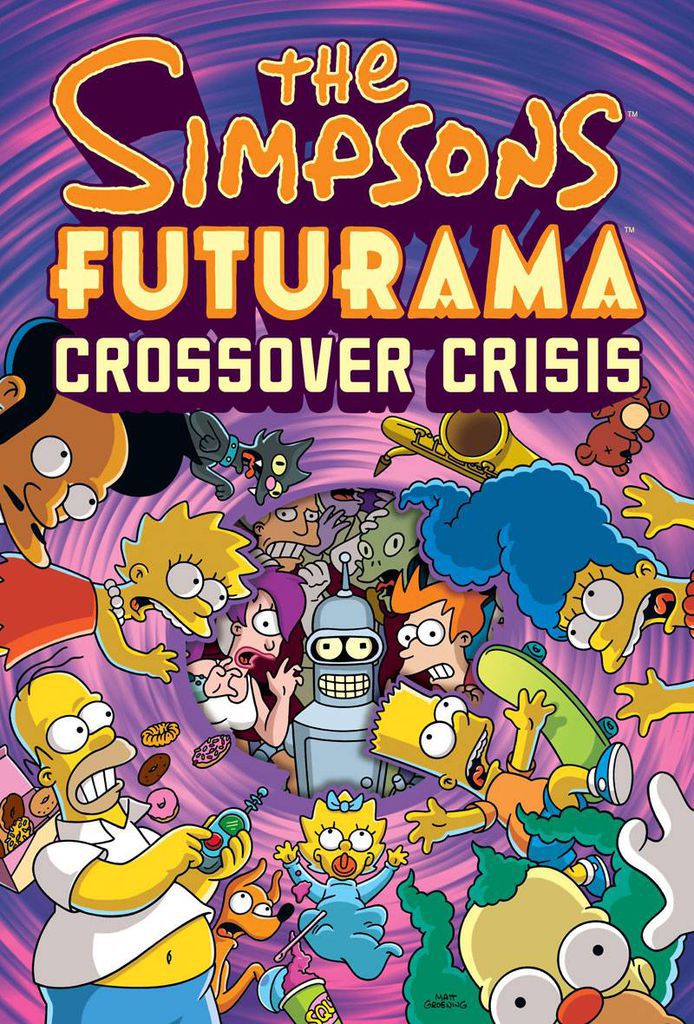 In 2014, a televised crossover 15 years in the making finally happened. It’d been hinted at, teased, been slyly noded to, and generally winked at since 1999 but this is the year that a meeting between the characters from The Simpsons and Futurama transpired on TV. But to comics fans, this meeting first happened over a decade ago.

From an outsider’s perspective, this crossover should be a relatively easy affair. Cartoonist Matt Groening created both shows. He co-developed them both. Both show’s character models are done in his style. Both shows debuted on Fox. And yet, it’s never happened on television. The small matter of The Simpsons living in the present and Futurama taking place one thousand years in the future makes the crossover difficult but not impossible. Fans held out hope but it seems like the creators of The Simpsons and Futurama went out of their way to prove a true crossover would never happen.

In the world of each of these series, the other is a fictional television show. Even if characters from either show were transported to the other’s time period, they wouldn’t meet. But that doesn’t mean small cameos wouldn’t happen from time to time. For instance, when the cast of Futurama landed on an asteroid comprised of Earth’s garbage, they found a small hill of talking Bart Simpsons dolls created during The Simpsons’ heyday over a thousand years earlier.

Similarly, a couch gag on from a January, 2001 episode of The Simpsons featured a blink-and-you’ll-miss-it cameo by a Simpsonized version of Fry, the main character of Futurama. His normally pink skin was changed to yellow to allow him to fit in with the Simpsons clan.

Though these teases and references continued, a true crossover never happened. At least, it never happened on TV. It was in the comics pages where this meetup finally took place. During a two-part miniseries titled Futurama / Simpsons Infinitely Secret Crossover Crisis, written by Ian Boothby, penciled by James Lloyd, and inked by Steve Steere Jr., it finally happened.

Futurama centers on an interplanetary delivery company named Planet Express whose crew is comprised of regular human Fry, mutant Leela, robot Bender, and several others. Just as The Simpsons television show existed in this world, the Simpsons’ comics published by Bongo Comics did as well. During some downtime while on a delivery run, Fry pulled out some thousand-year-old Simpsons reprints and began reading.

After landing for their appointed delivery, the crew ran into a race called the brain spawn. They’d met in a Futurama episode titled “The Day the Earth Stood Stupid.” In that episode, a race of floating giant talking brains attempted to take over the Earth. Among their many powers was their ability to draw people into the pages of prose books that were nearby. Over the course of that episode, the Planet Express crew found itself running through the pages of classic literature like The Adventures of Tom Sawyer, Moby-Dick, and Pride and Prejudice. Luckily, they escaped and everything worked out fine for our heroes.

During this second run-in with the brain spawn, the evil brains sent everyone from Planet Express into the pages of The Simpsons comic Fry had been carrying around. The group was seemingly trapped forever.

Just like that, Planet Express crew found themselves in the fictional city of Springfield. The brain spawn wiped their minds, making them forget how they arrived. Everyone split up. Fry and Scruffy got jobs at Springfield Elementary, Bender got drunk at Moe’s, Zoidberg and Hermes spent time at the Springfield Nuclear Power Plant, and Professor Farnsworth was sent to the retirement home.

The entire affair was light on plot and heavy on relationships, which is really what a good crossover should be about. It’s about seeing the similarities and differences between well-known characters that draw readers in. We don’t pay entry fees just to see Bart and Fry have separate adventures. We want to see Fry and Bart playing off each other and exposing different aspects of their character.

As all crossovers must eventually do, the plot did kick in at the end when Mr. Burns learned about alternate worlds and wanted to use them for his own nefarious means.

Everything worked out in the end. Burns was defeated. The Futurama cast was pulled out of the comic. The brain spawn were quickly defeated and afterwards, smiles and handshakes were had all around. But a sequel was hinted at in the final pages. The sequel came two years later. This time, it was titled simply The Simpsons / Futurama Crossover Crisis II though the creative team remained the same.

In an attempt to impress his fellow scientists, Professor Farnsworth tried to harness the power of fictional worlds. He used some strangely powered pinking shears to cut into a nearby Simpsons comic. Suddenly, the barrier between worlds was again broken and seemingly every single Simpsons character found themselves in the year 3005.

Finding himself in a rather large problem on his hands, Farnsworth did what any of us would do: He declared the fictional characters to be not real people by their very definition and stumped for their immediate enslavement. Surprisingly, New New York’s mayor was on board with that idea.

This time, it was blast to see the Simpsons characters in the Futurama world. The Simpson family joined the Planet Express crew on various missions. Mr. Burns and Mom began a torrid love affair. Mr. Smithers almost immediately became a space pirate who looked quite a bit like Captain Harlock down to the eyepatch. Again, the entire thing was an excuse to get various characters in an environment together and then shaken up. Once again, it worked wonders.

Eventually, as many crossovers do, yet another crossover broke out in the pages of this book. Professor Farnsworth’s fictional-barrier-smashing pinking shears went off again, this time slicing into many famous works of prose. New New York was flooded by characters from all over.

It was a crossover of epic proportions and allowed even more characters to climb into this fun stew of a story and get tossed around a bit. Page after page of Lisa fighting her female literary heroes, Marge swooning over men from the covers of romance novels, and the complete works of Stephen King on a murderous rampage soon followed. It was all wonderful.

As happens in every crossover, everything was eventually returned to its status quo and things returned to their normal state. I could read literary characters meeting these two casts for easily an entire six-issue miniseries. Sadly, two issues is all we got.

All of these stories can be found reprinted in a nice hardcover titled The Simpsons / Futurama Crossover Crisis. Seek it out.