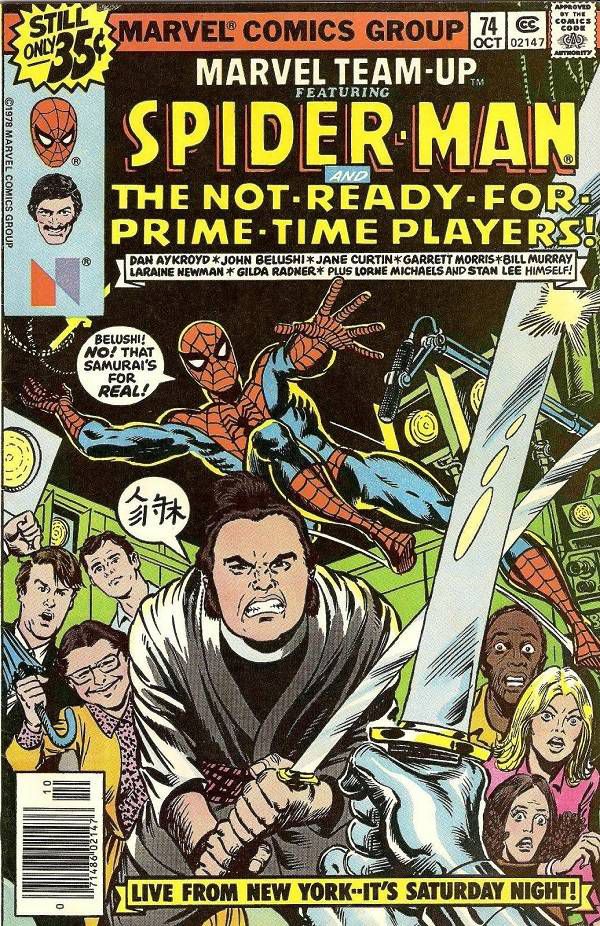 As much as it is a treat to see characters like Sonic and Spawn or Scooby-Doo and Batman meet up, that’s not entirely unexpected. All of those characters exist in one way or another in comic form. Having them meet up doesn’t completely defy expectations. Sometimes though, real people step into the pages of a comic. That’s when things get kinda weird. Such was the case in 1978 when Spider-Man met up with the cast of Saturday Night Live in the pages of Marvel Team-Up #74.

When this issue hit newsstands in the fall of 1978, Saturday Night Live was entering its fourth season. Most of the original cast was still in place. The notable exception was Bill Murray, who had come on board the show a few months after Chevy Chase left in the second season. The show had already become a phenomenon, making genuine celebrities out of its cast.

Spider-Man, meanwhile, was doing just fine in comics. Amazing Spider-Man had been running strong since 1963 and Marvel Team-Up had been a second Spider-Man book in everything but title since 1972. He even had several of his own shows come and go from television by this point.

Somehow, Marvel and NBC came to the agreement that these two properties should cross over. It would be the only time “The Not-Ready-For-Prime-Time Players” would meet the Friendly Neighborhood Spider-Man. To pull off this task, editor Bob Hall called up Chris Claremont to write the issue while Bob himself penciled it. Marie Severin handled the inks.

The story opened with the principal cast of SNL hanging out in their dressing room before their latest show. Featured cast members Tom Davis and Al Franken were no where to be seen. Instead, their much more famous colleagues Dan Aykroyd, Jane Curtin, Garrett Morris, Bill Murray, Laraine Newman, and Gilda Radner sat around watching John Belushi attempt to pull a ring off his finger. It had been a gift from a fan but Belushi couldn’t get it off. The rest of the cast sat around cracking wise while he struggled. Aykroyd made a reference to Belushi’s alcohol consumption, which surely played to the party boy persona Belushi was known for but comes off a little cringe-inducing when modern readers remember that the comedian would die from a drug overdose four years later.

As the cast prepared for the show, Peter Parker and his girlfriend Mary-Jane Watson walked into 30 Rockefeller Plaza’s famous Studio 8H where Saturday Night Live recorded its show. They scored tickets to see the New York-based show and they weren’t planning on missing it. As was the case with each episode of the show, there was a special guest host. This time, in a bit of synchronicity, Stan “The Man” Lee, co-creator of most of the Marvel universe including Spider-Man, was that guest host. Rick Jones, professional sidekick to many different Marvel heroes over the years and occasional guitarist, was the musical guest.

As Stan was the real-life creator of Spider-Man, his role was changed somewhat for the issue. He was still the face of Marvel Comics, which existed in the story as a publisher. However, Marvel now licensed the various superheroes for use in their comics. They were telling fictionalized stories based on real heroes. During his monologue, Stan even claimed to have taken many story meetings with the Thing, which seems like a real waste of time for a super strong dude who’s saved the world on many occasions. Still, the cache of being superhero-adjacent had somehow been enough for Stan to swing a hosting gig on SNL.

On this two-page spread, there’s another secret crossover happening. Writers of crossovers can never help themselves. In the bottom right corner are two grumpy old men who call each other Statler and Waldorf, the name of the two balcony goers from The Muppet Show. However, in this case, they’re excited to see the show, a fact which can never be said for their Muppet namesakes.

Soon, the plot kicked in. It seems that the ring Belushi was wearing wasn’t really from a fan. It was supposed to be sent to the Silver Samurai, a villain who got his start battling Daredevil several years earlier. In an effort to retrieve the ring, he snuck into the backstage area at Studio 8H and brought a group of thugs with him. But there was one thing he hadn’t counted on: Bill Murray with a prop Mjölnir.

Every sketch written for that night’s show was based on Marvel’s line of characters. So when Silver Samurai’s thugs came looking for the ring in Laraine Newman’s dressing room, they found the comedian dressed as Ms. Marvel. Luckily, Newman was a dead ringer for Carol Danvers. All she needed was a wig and spandex. Not wanting a fight with a genuine superhero, the tuffs turned tail.

While all this was happening backstage, Spider-Man’s spider sense finally made him get off his butt and start investigating. He spent a little time with Gilda Radner and Jane Curtin at the Weekend Update news desk while they did their bits and he helped stop the crooks who were nearby.

Soon, the entire cast was aware that thugs were after Belushi’s ring. Lorne Michaels was held hostage in the control room and everyone did their part to convince the thugs to leave. Garrett Morris tried admirably to scare them off when he dressed like Thor, but they didn’t buy that it was the real Odinson. Maybe Jane Curtin should have tried. A blonde woman seems to be a fine fit for the God of Thunder.

The story only got zanier from there. Dan Aykroyd joined the party by getting into a random outfit pulled seemingly at random from the wardrobe racks. He claimed that it would throw the villains off, but it was probably just because a Wolverine outfit wasn’t available.

The story culminated with the Silver Samurai going one-on-one with John Belushi in his Samurai Futaba character. Belushi was no match for the skills of an actual swordsman but he held his own for a moment. Though he swung in to help, Spider-Man was easily dispatched by the Silver Samurai’s well-thrown katana.

After overpowering everyone, the Silver Samurai yanked the ring off Belushi’s finger, yelled about how it was secretly a teleportation ring, then leapt away to somewhere else in the world. Spider-Man completely failed. The Silver Samurai got exactly what he wanted and gained the power of teleportation while Spider-Man stood there and watched. Not a great day for the Wall Crawler. However, he had teamed up with a sketch comedy troupe so he shouldn’t have expected a better result.

And also Stan Lee was still there.

As is the case for many crossovers, this one has never been reprinted. NBC owns the rights to the Saturday Night Live name. They and Marvel have never come to mutually agreeable terms that would allow this story to be made available again in any form. Marvel Team-Up reprints skip this issue. Marvel Unlimited and comiXology’s archives are missing this adventure. The only way to find it is to dive into some back issue bins. Even with that being the case, I hold out hope that we’ll see a sequel to this story one day mostly because I really want to see Bobby Moynihan’s Drunk Uncle character hang out with Thor. I’m sure they could knock back a few together.