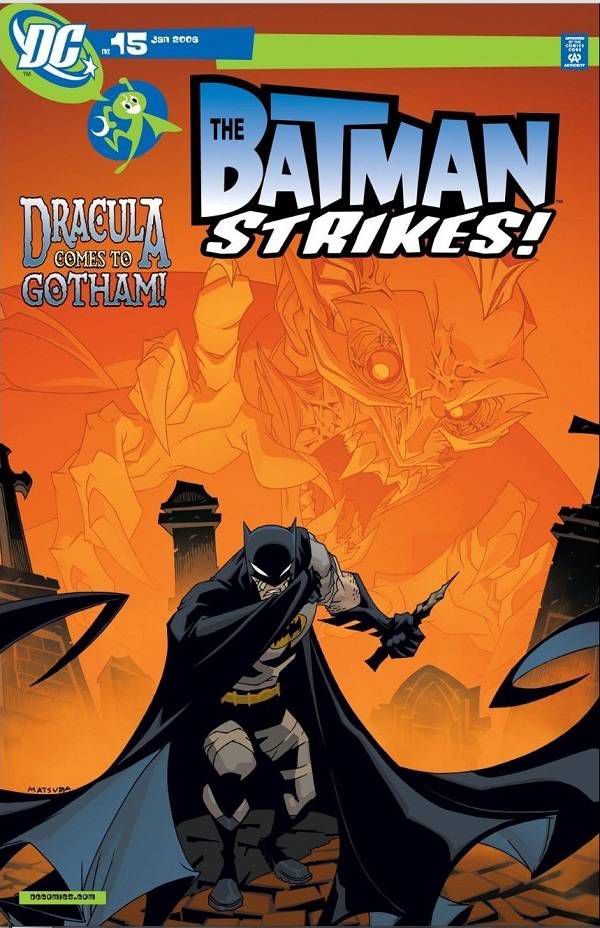 To many of the people living in Gotham City, Batman appears to be something supernatural. His ability to come and go without being seen, his almost inhuman fighting skills, and his single-minded focus on his goals make him to be something more than human. But, of course, Batman is just a man. So when he goes up against enemies who are themselves mythically powerfully, Batman’s limitations are revealed and the man behind the mask is shown for being the frail mortal he truly is. Such is the case the several times Batman has fought against the King of the Vampires, Dracula.

Dracula predates the World’s Greatest Detective by a good 42 years. In 1897, Bram Stoker created the character for the novel Dracula. There, Dracula was portrayed as a vampire, an undead creature who sucked blood from his victims and spread his curse to others. Only the timely intervention of a few brave souls stopped him from moving his operations from Transylvania to the heart of England. While Dracula wasn’t the first vampire ever created, he was the one who readers remembered the most and who stuck around in the public consciousness.

The gothic storytelling in Stoker’s original novel helped along the creation of Batman and the mood of his early adventures. Even though Dracula’s influence could be felt in some early stories, like when Batman fought a vampire named the Monk in only his fifth appearance, his adventures and Dracula’s remained apart. That changed, however, after pop artist Andy Warhol appeared in New York’s art scene.

Andy Warhol became famous for his art which played with the worlds of commerce and popular culture. According to reports, Warhol was a fan of the Batman comics when he was growing up. For a 1964 exhibit, Warhol produced and directed a two-hour film titled Batman Dracula without the permission of DC Comics. Details of what the film actually consisted of are hard to come by. The film was only shown during Warhol’s exhibits and doesn’t appear to currently be available to be seen in its entirety. The film may have been an attempt to show the similarities between Dracula and Batman as cast lists show that a single actor played both characters.

A few years later, another unauthorized meeting between Batman and Dracula happened, this time in the Philippines. Two earlier illegal filipino Batman films had already been made by the time something called Batman Fights Dracula was released. The second had even crossed over the Dark Knight with a James Bond stand-in. But this one gave Dracula equal billing with our hero as they battled over the innocent lives under Batman’s protection. Unfortunately, like the Andy Warhol film that preceded it, this film is also unavailable in its complete form.

In the years following these two films, Batman met vampires occasionally. He met a vampire named Gustav Decobra in 1976’s Detective Comics #455 and he came across Andrew Bennett, also known as I… Vampire, in the pages of 1983’s The Brave and the Bold #195. But in neither of these stories did he met Dracula proper. That most famous of the undead bloodsuckers remained off Batman’s radar.

The first officially licensed crossover between these two legendary characters took place in 1991. Written by Doug Moench with pencils by Kelley Jones and inks by Malcolm Jones III, this was an out-of-continuity Batman story. Titled Batman & Dracula: Red Rain, this one-shot was adorned with the Elseworlds logo on its cover which let readers know the story took place in a different world than the stories told in the monthly Batman comics. It was here that Dracula set up his operation in the sewers of Gotham City. Soon, the undead madman began attacking Gotham’s citizens in an attempt to feed his hunger. Batman, of course, wasn’t a fan of this plan and brought the fight to the vampire’s underground lair.

This take on Batman showcases the wonderful work of Kelley Jones. Out of the Batman outfit, Bruce Wayne is an athletic, muscular man. When he’s wearing his costume, he becomes something more. The extreme height Jones gave his ears, the absurd length of his limbs, and his stretched torso give Batman an unreal presence. When he’s in his costume, Batman isn’t human. He’s an archetype, fighting against evil personified.

The story itself is a little of its time. Most of the story is told from Batman’s point of view with inner monologue being written in cursive around the panels almost as though Bruce Wayne wrote about the scene in his diary and we’re reading about it second hand. Occasionally, the scene shifts to Commissioner Gordon and his diary entries, which are written in a different handwriting style. This structure is extremely similar to Frank Miller and David Mazzucchelli’s “Batman: Year One” storyline from 1987. This diary concept was used to great affect in that story. Here though, that storytelling techniques feels a little forced and out of place. Gordon doesn’t even have all that much to do in this story. His passages don’t add much. Still, the story moves along at a good clip.

As the story continued, it was shown that Dracula could change his shape from being a normal looking human to being a huge bat thing with wings and enormous, well-defined muscles. Batman was easily going to be crushed by Dracula if not for the intervention of Tanya, a vampire working against both her base instincts and the evils of Dracula. She fed on Bruce Wayne’s blood just enough to give him a dose of vampiric strength and speed in order to combat their mutual foe. Though she was eventually brought down the Dracula, Tanya’s efforts also gave Batman real bat wings which allowed him to fly and pursue the Lord of the Undead.

The story ended with Dracula’s death but with Batman fundamentally changed. While Tanya had only changed Batman part way into a vampire, Dracula had completed the process. Batman was undead but decided to remain in his city, helping its population move forward. To help combat his evil urges, he found he could live off a synthetic type of blood Tanya had developed.

This wasn’t the end of the story. Moench and Jones wrote two sequels detailing Batman’s efforts to stave off the negative effects of vampirism but keep the strength and speed. Those are chronicled in the titles Batman: Bloodstorm and Batman: Crimson Mist. A trade came out in 2007 which collected all three stories under the title Tales of the Multiverse: Batman – Vampire though it’s currently out of print.

In 2005, Batman and Dracula met again. This time, it was in an animated made-for-video DVD.

When the various Bruce Timm-led Batman animated television shows wrapped up in 2001 with Batman Beyond, a void was left for Batman fans. While the Dark Knight was found in most episodes of Justice League and its sequel series Justice League Unlimited, these were ensemble stories dealing with the Justice League as a whole or a small handful of its members. It was no longer specifically about Gotham City and its protector. Little was seen of Alfred, Commissioner Gordon, and other supporting characters. That changed in 2004 when The Batman launched first on the WB.

Though the series later shifted to introducing several of Batman’s sidekicks, the series began with a focus simply on Batman. Here again was a Batman fighting a lonely battle against the evils of the world. Near the beginning of its third season, when the series still had its focus primarily on the Dark Knight only, a straight-to-DVD adventure titled The Batman vs. Dracula was found on store shelves. In it, Dracula was accidentally awakened by the Penguin deep in the catacombs of Gotham. How Dracula’s body had come to Gotham was briefly smoothed over, but it wasn’t really important. All that was important was Dracula was in town to battle against Batman. The King of the Undead quickly created a vampire army and launched an attack on the city though he also spent a bit of time hobnobbing with Gotham’s elite like millionaire Bruce Wayne and reporter Vicki Vale.

To Batman’s credit, he quickly discovered that the mysterious “Dr. Alucard” was actually Dracula with his name spelled backwards. He comically did this by taking the time to write out the name “Alucard” and then holding it up to a mirror. Apparently, Batman is a visual learner.

The cartoon had some surprisingly dark and non-kid friendly visuals. For instance, there’s a fight scene between Batman and the Joker. Now, that’s nothing too shocking. Those have been happening for decades. This time, things were different. Joker had been bitten by Dracula and turned into a vampire. His battle with Batman took place in an enormous, poorly-lit blood bank. Just before the battle began, Joker was seen chugging gallons of blood. Vials of the stuff were toppled over all over the place as their battle continued. The fight ended with the Joker being bathed in plasma and the undead Clown Prince of Crime licking blood off the walls. It was pretty dark stuff, to say the least.

During Batman and Dracula’s various battles in this film, it was shown just how much more powerful and quick the undead Lord of Vampires was then the Caped Crusader. Dracula routinely sidestepped all of the various attacks aimed at him. However, by the movie’s end, Batman proved he owned the bat motif, not Dracula.

Around the same time this DVD came out, a companion comic was released. The Batman Strikes! comic series was set in the same world as The Batman television show and its fifteenth issue featured a side story which took place between the frames of The Batman & Dracula. Sadly, Dracula barely appeared in the comic. In fact, he and Batman never even met in its pages. It was a letdown to say the least.

That’s the last time Batman and Dracula have met in any official form. As Dracula is currently in the public domain, it seems clear that another run-in between the two is only a matter of time. DC doesn’t have to ask anyone’s permission to have this King of the Vampires back to torment the people of Gotham City. They just need to have a decent excuse to have him show up and a Batman willing to do whatever it takes to save the people of his city. Both should be easy enough to come by.