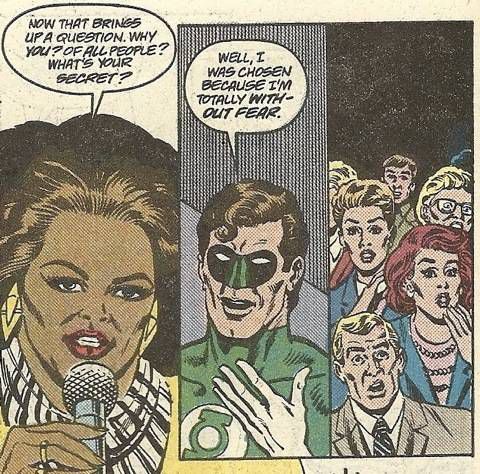 Even superheroes need a little PR rehab once in a while. Hal Jordan learned that truth after Carol Ferris framed Green Lantern for her apparent death. Carol had been taken over by her evil Star Sapphire personality at the time and it was a whole thing. In any case, Hal found himself on the outs with the public. In an effort to explain what happened, Hal asked to be a guest on The Oprah Winfrey Show.

The next chapter in the story opened with Oprah angry that Hal wasn’t in the studio yet. Strangely, the story was written by Peter David while the setup to this issue was written by James Owsley. Something weird happened there behind the scenes.

Hal had overslept. Plus, he lived in Coast City which has traditionally been located in California and Oprah filmed her show in Chicago. He must have been fighting a serious case of jet lag. To make matters worse, Hal was delayed even further by random crime happening in the city.

At the last possible moment, Hal showed up, Oprah put on her public face, and the two started their interview. While Oprah had been upset moments earlier, she was a professional and knew how to properly conduct an interview.

They got through the “I didn’t kill Carol Ferris” portion of the program pretty quickly and then it was on to audience questions. Hal told everyone that he was Earth’s Green Lantern, thank you very much, and that was how it was always supposed to be. When Oprah pressed him on that idea, Hal revealed he was mentally unbalanced what with his total and complete lack of sweet, self-preserving fear. The audience found this hilarious.

Green Lantern had fought hundreds of foes both on Earth and around the galaxy. He’d battled huge aliens, bank robbers, galactic conquerors, and more. Yet it was Oprah who defeated and embarrassed him with her pointed questions. Oprah’s keen instincts for what makes people tick and how to get them to reveal themselves to an audience beat Hal’s sheer will power.

From there, all Hal could do was spin a little damage control. Unfortunately, the jabs were coming from the audience members now as each wondered if Hal was, y’know, a real dumb-dumb.

Hal left the studio with his tail between his legs. Was he a freak? Did his lack of fear cause him to do things that he shouldn’t do? The storyline progressed from there but it did so without a studio audience. The Oprah Winfrey Show and its famous host never appeared again with Green Lantern. Still, Oprah had asked the right questions at the right time. Her impact continued to be felt on the Emerald Warrior for several issues.

Oprah would never again appear in the DC Universe. Until I hear otherwise, I assume her talk show has continued to this day. After all, with all the reboots DC has done over the years to keep its characters young, who’s to say some of that didn’t leak over to America’s premiere talk show host? Fingers crossed that a reboot is right around the corner.