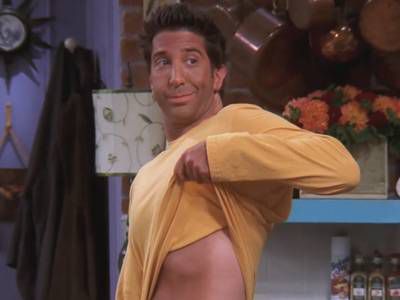 Almost two decades before the various Gen13 characters were folded into the continuity of the DC Universe, they were found in the pages of their self-titled Image comic. Created by Jim Lee,  Brandon Choi, and J. Scott Campbell, the group consisted of a bunch of super-powered teenagers. Among their group was a teen named Grunge, who took the easy way out whenever he could but was still dependable in a fight. He also loved comic books. In this thirteen issue (which was split into three issues labeled 13A, 13B, and 13C) of Gen13‘s second series, Grunge found himself sucked into the Land of Sequential Art where he met a boat-load of other comics characters. Among those many meetings was Fone Bone from Jeff Smith’s epic Bone, with whom Grunge shared the cover of Gen13 #13B.

The story started simply enough. Grunge brought the rest of Gen13 to the mall where a super rare chromium covered comic was being raffled off. When he didn’t win the drawing, Grunge sulked to the bathroom where a mysterious stranger gave him the issue he was dreaming about in exchange for his soul. The next thing he knew Grunge was pulled into the Land of Sequential Art where a small fairy named Tinker Fall (who looked an awful lot like his teammate Freefall) lead him to the Great Wizard who could send him home.

His first stop on his journey was Riverdale High and the cast of Archie.

But, he was soon on his way. His next stop was running into the Teenage Mutant Ninja Turtles, who had been buried beneath a mountain of their own merchandise.

After two pages of Turtle time, Grunge traveled into a nearby scary forest where he ran into Fone Bone and nearly killed the citizens of Larry Marder’s independent comic Beanworld by eating them. The crossovers were coming fast and furious now and readers had to kick hard in order to keep their heads above water in this pretty crazy story.

Eventually, Grunge made it to the Great Wizard’s castle where he met an igor-esque character named Leegor who looked and sort of acted like Jim Lee. After telling Grunge that the Great Wizard took off to fight the Frenzy Beast, Leegor gave Grunge a good luck charm shaped like a ruby “X”.

Grunge took off after the Great Wizard when he stumbled down a dark alley and ran into Spawn, who told him that he’d need a guide to track down his prey. That’s when Mike Allred’s Madman showed up because hey, this story was a party and everyone was invited.

It should be said that all of these crossovers continued for a page or two at best. These weren’t long, involved meetings of the mind. These were short “Hey! Look at that character!” moments.

Anyway, off Madman and Grunge went onto something with the sinister name “Route 666”. There, a ground of scantily clad ladies were waiting for them with names like Witchblade, Lady Mortem, Jungle Princess, and Shi. Also around for some reason were Katchoo and Francine, two of the main characters in the romance comic Strangers in Paradise by Terry Moore. This section was supposedly a send up of how many female characters are presented in comics, but the satire was laced with a lot of images of ladies not wearing much in the way of clothing so the point was lost a bit.

A turn in the bend brought Grunge to the feet of Art Adams’ Monkeyman and O’Brien alongside everyone’s favorite demon, Mike Mignola’s Hellboy.

Finally, Grunge and his party found the Frenzy Beast. Even though Grunge was told that the chromium cover he owned was the object that would turn the tide of battle, he got cold feet and attempted to run away. Only the arrival of Ton Robbins, life coach and motivational speaker, was able to sway the young hero’s mind.

Why was Tony Robbins there? I truly have no idea. It might just be the oddest moment in a story full of them.

Grunge began to believe in himself and the ruby “X” that Leegor gave him suddenly started to glow. Out popped a figure who sliced his enemies to ribbons and with whom Jim Lee had a history. Out popped Wolverine.

When he learned that the Frenzy Beast wanted the chromium cover himself to complete his collection, Grunge stood his ground and ripped the comic in half. The Beast was apparently a die-hard collector who only wanted the comic to fill a hole in his collection, not to actually read and enjoy its contents. Destroying the comic shoved Grunge back to his regular Earth and out of the Land of Sequential Art.

All told, this was a pretty weird story, full of inside jokes about the behind-the-scenes dealings in the world of comics. Fans of spectacle can find much to pour over here as each new guest star was given a wonderful hero shot when he or she entered the story. The plot might not have made much sense, but story remains a fun artifact of 1996 indie comics with a splash of Wolverine thrown in for good measure.

All of the cameos in the book mean this thing will almost certainly never be reprinted. Try to find all three issues for no other reason than for reading the only time Tony Robbins was in the same comic as Hellboy, Madman, and Wolverine.

Jeez, this story is weird.