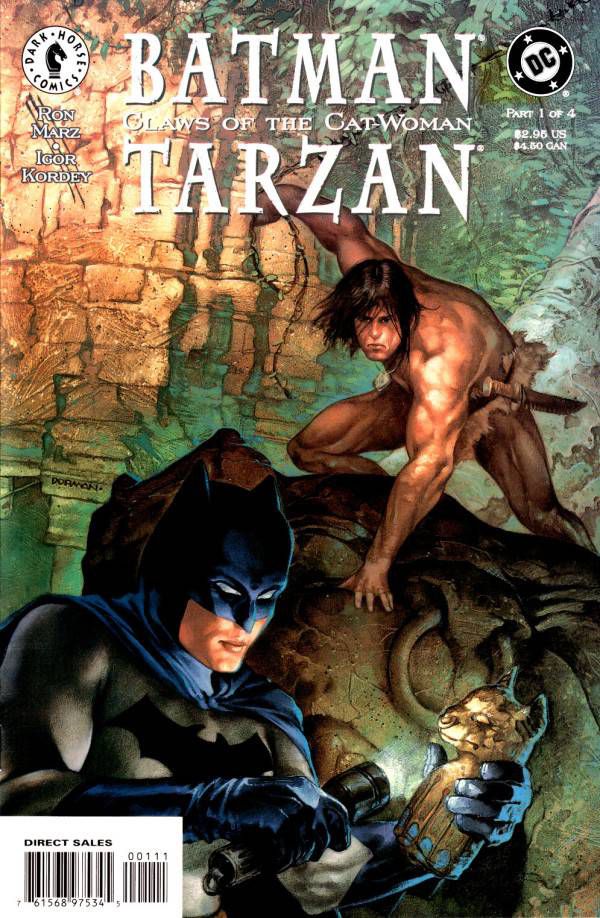 Tarzan of the Apes predated Batman by a good 27 years. Created by Edgar Rice Burroughs, his first story was published in 1912. Born John Clayton to an English mother and father, Tarzan was raised by apes in Africa after his parents died while visiting the area. He protected his adopted home as he grew, eventually finding allies in all manner of creature in Africa’s untamed jungles. Meanwhile, Batman grew up in a more urban environment. He swung through skyscrapers made of iron and steel instead of through the red cedar and mahogany trees of Tarzan’s purview. Though they lived in such different environments, they both helped keep their communities free of evil and crime.

The two first met in 1977 on television. They were a part of the Batman / Tarzan Adventure Hour on CBS. Unfortunately, they had no real on-camera time together as this was simply the name given to the chunk of time that ran first a Tarzan cartoon and then a Batman cartoon.

It wasn’t until 22 years later that the two first truly interacted. In a miniseries titled Batman / Tarzan: Claws of the Cat-Woman, the two finally met and began an adventure together. It was a pretty epic affair.

In 1999, Dark Horse Comics had owned the comic license to Tarzan for a few years. They and DC Comics agreed to have a crossover between their popular character and the Dark Knight Detective. Ron Marz was pulled in to write and miniseries and Igor Kordey handled all of the art.

The story opened in a Gotham City slightly different than the one regular Batman fans knew. It appeared to take place in the first half of the 20th Century. Tarzan was a well-known celebrity at this time and was attending a function held by Bruce Wayne. An excursion into Africa had just been financed by Bruce and the artifacts found were on display at the Thomas and Martha Wayne Wing of the Gotham Museum of Natural History. It was there that Tarzan and Bruce shook hands for the first time.

As tends to happen in crossovers, action soon followed. It seemed that Finnegan Dent, the archaeologist Bruce hired to go to Africa and find these treasures, hadn’t exactly asked permission when he brought them his findings to Gotham. The natives of the hidden city of Memnon were upset that their sacred artifacts were stolen so their princess, dressed as a cat-women, tracked them down all the way to America. A battle with African assassins followed and then Batman and Tarzan made their way to Africa to stop Dent from plundering more treasure.

It would have been much easier if Bruce had simply cut off Dent’s funding immediately upon learning of Dent’s villainous ways. But that wouldn’t make for a great story. Batman and Tarzan fighting giant apes side-by-side is much more visually striking and was probably a better choice.

Eventually, Dent was tracked down and had the left side of his face ripped off by a lion’s claws thus making him Two Face in all but name. It seemed he didn’t simply want Africa’s treasures. He wanted to be the pharaoh of the hidden city of Memnon. In order to secure his place, he dropped Tarzan and Batman into a sea full of crocodiles. Perhaps unsurprisingly, the pair survived because, well, this wasn’t the first crocodile rodeo for either of them.

This turned out to be quite a fun story. At several points, Batman tut-tutted Tarzan’s tendency to kill his opponents in combat. When he was in Gotham, Tarzan followed Batman’s rules but in the jungles of Africa, he went back to his own ways. He expressed more concern for his pet lion than the men they were fighting, which surprised Batman. It was nice that each character kept his core attributes in this story and was able to bounce them off the other person. It lead to a nice dynamic in the story and a good amount of tension.

The two characters never met again. DC doesn’t appear too concerned with inter-company crossovers these days, so I doubt another one is in the cards right now. Still, there feels like there is more to be mined if another crossover is ever made. The two men fight in different jungles but against similar enemies. Another team-up would be a perfect fit.