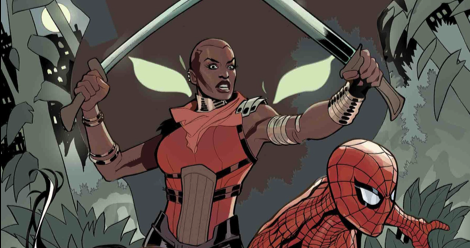 In Wakanda Forever: The Amazing Spider-Man, the Dora Milaje are finally getting their own arc, with Okoye, Ayo, and Aneka headed to New York to investigate a threat to national security, and connecting with Peter Parker in the process. Written by acclaimed sci-fi and fantasy author Nnedi Okorafor, with illustrations by Alberto Jiménez Alburquerque and Terry Dodson, the three-part comic will shed new light on the heroes who have become fan favorites.

Board members tapped the candidates one by one, like pledges to an exclusive club. They were asked to submit memos and then summoned for 45-minute sessions in the riverside townhouse. The search committee, which includes novelists Mona Simpson and Jeffrey Eugenides, presented fairly conventional questions (e.g., which Review story they liked best, and why) — without revealing what they’re actually looking for in a successor to Stein. “It sounds a bit like being brought before a tribunal,” says one friend of a candidate. “It seems there was some theater of power.” Interviewees were told they’d hear more in a few weeks.

Investigating the Paris Review‘s search for an editor to replace Lorin Stein, who resigned amid sexual-harassment allegations.

This week, publisher Grove Press announced that 39-year-old Lisa Brennan-Jobs is bringing out a book, “Small Fry,” about growing up with the late Apple cofounder and her mother, artist Chrisann Brennan. The Associated Press reports it will be released on September 4, 2018.