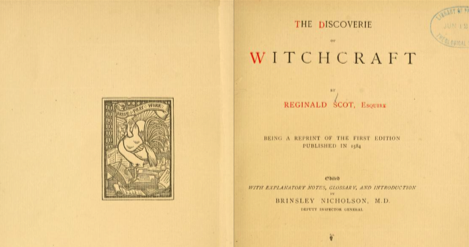 Yes, there are shelves of hymnals, hardly the kind of thing to generate much interest among any but the most devout or the most deeply-down-a-scholarly-rabbit-hole. But there are also many fascinating gems like Jacob Grimm’s 1882-88 Teutonic Mythology in four volumes (translated into English), like E.A. Wallis Budge’s beautifully illustrated 1911 Osiris and the Egyptian Resurrection, and like Wesleyan minister Charles Roberts’ 1899 The Zulu-Kafir Language Simplified for Beginners.

Here for the digitized version of The Discoverie of Witchcraft!

WAKANDACON is a fan-driven, one-day celebration of Afro-Futurism, Tech, and Black superheroes in film, television, and comic books, and of course, Black Panther.

Our event will be held in Chicago, IL in Summer 2018. Join fellow citizens of Wakanda for discussion, education, networking, and festivities.

Grab a ticket to Chicago.

Netflix has taken Lily James movie “The Guernsey Literary and Potato Peel Pie Society” for a raft of markets, including the U.S. Based on the Mary Ann Shaffer and Annie Barrows’ New York Times bestseller, the picture’s producers include Blueprint, which is fresh off the success of “Three Billboards Outside Ebbing, Missouri.”

For those in the U.S. wondering how you’d watch it.