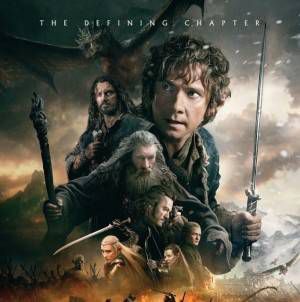 Note: I am aware of the deep mythology of J.R.R. Tolkien’s Middle Earth. In this post I am giving only a brief introduction to the parts of the story and the characters that are relevant to the songs below.

The Hobbit: The Battle of the Five Armies, the third and final installment of Peter Jackson’s adaptation of J.R.R. Tolkien’s book The Hobbit, premieres on December 17. To hold you over until the arrival of that magical date, here are four songs inspired by The Hobbit as well The Fellowship of the Ring, The Two Towers, and The Return of the King.

Rush is a trio that consists of the very accomplished musicians Geddy Lee (bass), Alex Lifeson (guitar), and Neil Peart (drums). The song “Rivendell” is featured on Rush’s second album, Fly By Night, from 1975. Rivendell is the outpost of the Elves in Middle Earth, located in the foothills of the Misty Mountains. In The Hobbit, Bilbo and the dwarves stop at Rivendell on their way to the Lonely Mountain. In The Fellowship of the Ring, Rivendell is where Bilbo has retired after leaving the Shire and it is where the Fellowship is formed to help Frodo bring the One Ring to Mordor.

Just like Rush, Nickel Creek is a trio consisting of accomplished musicians, namely Chris Thile (mandolin and vocals), Sara Watkins (fiddle and vocals), and Sean Watkins (guitar and vocals). In 2000, Nickel Creek released a self-titled album that featured the instrumental song, “House of Tom Bombadil.” Tom Bombadil is a character of unknown age and heritage in The Fellowship of the Ring. He saves Pippin and Merry from being swallowed by the tree trunk of the Old Man Willow.

Led Zeppelin, “The Battle of Evermore”

Led Zeppelin—Robert Plant (vocals), Jimmy Page (guitar), John Paul Jones (bass and keyboards, as well as any other instrument he can get his hands on), and John Bonham (drums)—wrote and recorded several songs referencing Tolkien. Of these, “The Battle of Evermore” off their fourth album, released in 1971, is arguably the one song most inspired by him. The lyrics are based on The Return of the King, but without mentioning any specific events. Personally, I relate this song to the Battle of the Pelennor Fields, which determined the fate of Gondor.

In the middle of production on Star Trek’s second season, Leonard Nimoy found the time to work on a career in music. One of the songs he recorded is “Ballad of Bilbo Baggins,” from 1967. The song was included on Nimoy’s second album, Two Sides of Leonard Nimoy, and was also released as a single. In the video for this song, Nimoy is lip-syncing while sporting his Spock haircut, surrounded by girls wearing the pointy ears of the Hobbits (or are they perhaps Vulcan ears?).

Are there any other songs inspired by Tolkien that you would like to add?