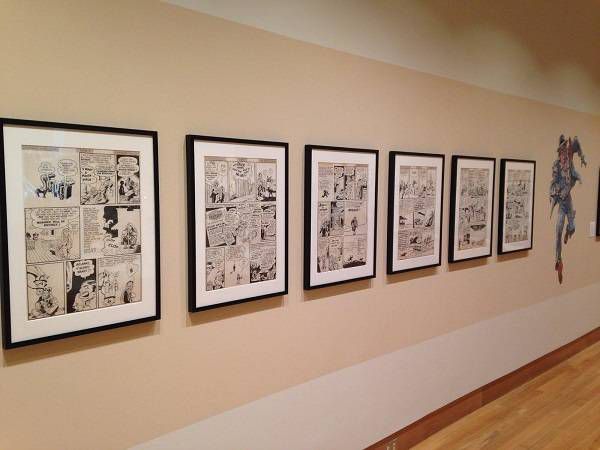 In today’s world of comics, preservation of new material seems easy. Many commercial comics artists create their works completely in the computer. Digital ink touches digital paper and everything gets backed up to external storage devices measured by the terabyte, clouds of various sorts, and ftp networks. Handled correctly, this type of art should be around for decades to come. The same cannot be said for the analog version of that same art. Ink and paper degrade over time, causing art of cultural and historical value to be destroyed through both natural means and unnatural, if the person in possession of that art doesn’t respect it. Luckily, there are museums and libraries devoted to the care of comic art and work to keep it in good shape so it can be presented to future generations. The Billy Ireland Cartoon Library & Museum in Columbus, Ohio is one such place.

Located on the grounds of Ohio State University, the Billy Ireland Cartoon Library & Museum is named after a famed Ohio political cartoonist. Originally, their holdings focused on newspaper comic strips but over the years, many donations and acquisitions have expanded their collection. Currently, their collection runs in the millions of pieces of which only a small fraction are on display at any one time in the museum’s galleries.

Along with a permanent collection, the museum makes space for two exhibits. These temporary exhibits get changed about three times a year, making it an event when something new is put up on display. While past exhibits have focused on topics like Bill Watterson’s Calvin and Hobbes comic strip and cartoon lithographs from the American Civil War, the current exhibits in place each examine decades of work. Will Eisner: 75 Years of Graphic Storytelling gives attendees a gorgeous overview of the works of a legendary master of the artform. Next door, The Long March: Civil Rights in Cartoons & Comics uses the recent release of March: Book One as a jumping off point to show various reactions to the Civil Rights Movement in newspaper comic strips and editorial cartoons. Both exhibits are immersive and well curated.

Strolling through the permanent gallery gives a little more scattershot view of comics history. An original page of Bone is framed on the wall a little ways away from an original Peanuts strip which itself is only a few feet away from a page of Todd McFarlane’s run on Spider-Man. On each can be seen the faded rubber cement used to affix the comic’s logo, the corrective fluid used by each artist, and the the stroke lines of the pen as the work was completed. It’s an amazing collection though my favorite is a 1959 Walt Kelly Pogo strip which plays with the comic convention of word balloons.

Along with the art on the walls, the permanent collection has several furniture pieces with drawers. In each drawer is a glassed-in display showcasing examples of various types of comics such as underground comix, superhero comics, and various comic strips. Original art from folks such as Trina Robbins and Gene Colan can also be found with a little hunting. There’s an awful lot of stuff in this one room.

Each exhibit is just as engrossing. The Long March’s collection of Civil Rights-era material is particularly eye-opening. Among the works is a small comic titled Martin Luther King and The Montgomery Story, an educational comic published in 1957 about the Montgomery Bus Boycott. It also talked about non-violent resistance. It’s located near original pages of March: Book One and Book Two as Congressman John Lewis, whose memories and experiences the March series is based on, read this comic as a young man. This small comic had such a profound effect on him that he was open to translating his story into the comic book form over fifty years later.

Among the rest of the exhibit’s pieces are many editorial cartoons which present people’s fears about the Civil Rights Movement and others’ support of the protesters. There is also a wall dedicated to the comics and cartoons found in the African-American press. These reactions to the events of their day, including the election of Richard Nixon in 1969, are of particular significance. Those interested in contemporary voices from this time period should find it all fascinating.

The Will Eisner exhibit gives a wonderful overview of both the life and work of the profoundly influential Eisner, whose work spanned almost the entirety of the American comics form. An entire wall is devoted to the Spirit, his most famous creation. Two entire seven-page Spirit stories are included in their original pages. It’s a sight to behold.

Other walls and displays show other sides of Eisner’s work including his later love of graphic novels, many of which took place in the New York City neighborhoods of his youth, and the educational comics he worked on after he stopped regularly working on the Spirit’s stories. There is even a display containing some of the Eisner family’s personal correspondence. Another houses Eisner’s military ID card and his dog tags. Each display can easily be poured over by fans.

My favorite piece in the exhibit is a half-completed cover of a book called John Law Detective, which was started in 1948 and never completed. Eventually, the John Law stories were published in 1983 by Eclipse Comics, but this cover remained unfinished. Peeking behind-the-scenes at Eisner’s work in action is amazing.

While the permanent collection will stay in place, both of these exhibits only remain through the end of November. Truly, the only downside to them is that each is confined to a single room. To be sure, there’s a ton of wonderful stuff in each but I couldn’t help but wonder what else the Billy Ireland Cartoon Library & Museum has that there wasn’t room to display. Of course, the museum’s space is simply what it is but each item succeeded in whetting my appetite for even more.

The Billy Ireland Cartoon Library & Museum is located at 1813 N High Street, Columbus, Ohio and is open from Tuesday through Saturday 1 to 5 PM. Admission is free. The current exhibits run until November 30th, 2014.