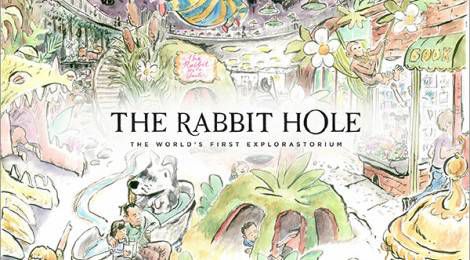 If you have ever thought, “I wish there were a storybook museum where I could walk through a story cover to cover,” you are in luck! Children’s booksellers Deb Pettid and Pete Cowdin have launched an amazing prototype for the world’s first “Explorastorium” in Kansas City, MO, a museum with full-scale 3D installations that immerse visitors in the world of children’s literature.

The Explorastorium is officially called The Rabbit hOle, and the prototype lives in a 4,000 square foot temporary space in Kansas City’s Crossroads arts district. They’ve been showcasing elaborate papier-mache sculptures of characters and scenes from children’s books during local events and art walks, and will open a new immersive exhibit featuring the book The Incredible Painting of Felix Clousseau in April 2016.

“We’re inventing something that doesn’t exist,” the owners told Kansas City’s NPR station. “We’re creating a building filled with narrative… It will be a complex, a hive of children, young people, and adults. We’re appealing to parents and kids — this will not be a place where you drop your kid off.”

The vision is to open a permanent 50,000-100,000 square foot structure with galleries and rotating exhibits in 2019  — or sooner, if they raise the funds. They will also host author visits, workshops, book clubs, and other potentially irreverent shenanigans for which Pettid and Cowdin are known (like that time they held a funeral for Harry Potter at their bookstore, Reading Reptile).

The Explorastorium is non-profit and has an advisory board of A-list children’s authors including Lisa Campbell Ernst, Shane Evans, Kate DiCamillo, Daniel Handler (Lemony Snicket), Linda Sue Park, Brian Selznick, and Jon Scieskza. You can read more about the Explorastorium (and also donate!) on The Rabbit hOle website, and on KCUR.org.

How AMAZING does this museum sound, and what stories do you most wish they would bring to life so you could walk through them cover to cover?