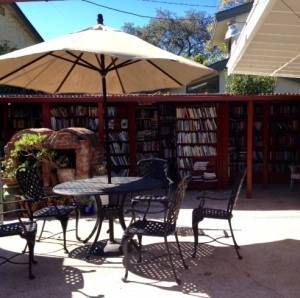 If you head north on the 101 from Los Angeles and veer off towards the mountainous edges of the Los Padres National Forest, you’ll come to a charming small town called Ojai. The people are friendly, the businesses are independent, the wine is organic, and the celebrities can be sighted on occasion. The film Easy A, a re-imagining of Hawthorne’s Scarlet Letter starring Emma Stone, was filmed there. But the real (or the best?) reason to make a trip to this little pocket of California is to go to Bart’s Books. 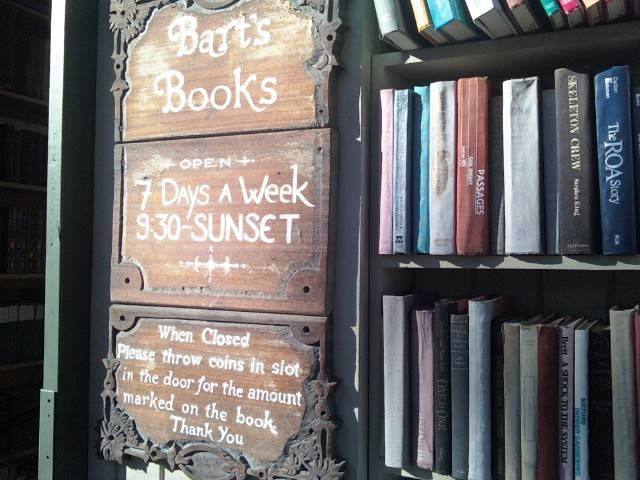 Bart’s Books claims the title of the largest independently owned and operated outdoor bookstore in the United States. In 1964, Richard Bartinsdale’s (Bartinsdale = Bart) book collection had gotten to so big – we can relate, right? – that he built shelves along the sidewalk so that people walking by could browse through the collection. He left coffee cans on top of the bookcases for people to drop their money in when purchasing a book.

Wait. People buying books on the honor system? I know. I had put it down to the fact that it was the 60s when he opened the place and that this was California and it continues out of nostalgia for a bygone era. But when I spent a weekend in Ojai, I discovered that the culture of the town is actually quite honorable. I visited on July 3rd, and as we drove down the main thoroughfare, we saw lawn chairs (and even a couch) lined up along the sidewalk, saving seats for the July 4th parade that would go through town the next morning. We mentioned the chairs to a man running a t-shirt store, and he told us it’s like that every year, that people begin staking their spots and leaving their chairs days in advance.

The chairs weren’t roped together or tied to phone polls or in any way secured against theft. “Anywhere else in America,” I told him, “I think those chairs would have been stolen already.”

The man looked at me, puzzled. “Who would want to steal them?”

That’s how a bookstore founded on the honor system manages to get off the ground:  the genuine question of wondering who would want to steal a chair. Or a book.

Bart’s Books keeps remaindered titles outside, all of which are available for 50 cents or so, and all of which can still be purchased, after hours, on the honor system by dropping money through a slot in the door. But go while the store is open, and you’ll get to experience the sheer joy of a large inventory of books in an open-air store. A lemon tree grows out of the center of the store, and birds perch on branches. On one of my visits, a woodpecker was going to town on a utility poll across the street, and you could look up and watch him from your vantage point by the history books.

Visit the store in the early morning, just after opening, and enjoy the chill of the back aisles, shielded from the sun, like walking through a wine cellar. But with books. Take a Bart’s Books virgin, and watch their delight. I took a friend and found her in a corner with the science books. She had not even made it to the fiction section, which takes up the left half of the store. When I led her there, she only had time to make it to the B’s (by author last name) before we had to leave.

This is not your clean and shiny bookstore with bathrooms (no public restrooms, sorry) or a cappuccino maker. But Bart’s Books is a relic from a time when a bookstore could get started because a guy had too many books in his possession, when patrons could be trusted to pay on the honor system. It’s a place where a little California desert dust and a dose of sunshine comes free with every book you purchase.

Don’t pet the cat. Don’t neglect the outdoor shelves. Make sure you head to the center of the store, where the food books are stocked in a remodeled kitchen. Enjoy the free bookmarks that come with purchase, and let them remind you of a simpler time in a small town in southern California.