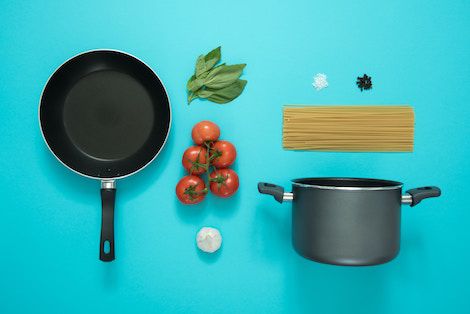 Have you seen the four-part documentary Salt, Fat, Acid, Heat on Netflix? If you have not, I really must suggest that you open up another browser window (or the app if you’re mobile) and watch it immediately. Just cancel your plans for the next three and a half hours and let Samin Nosrat teach you about food. Your life will be better for it.

Or maybe you’ve read her book, Salt, Fat, Acid, Heat, on which the docu-series is based. I had somehow managed to never hear of it before stumbling upon the documentary, so I am reading it now. I was all in to begin with, and from the introduction I was…whatever a step beyond all in might be. It is so good. So so good.

The existence of Salt, Fat, Acid, Heat in both its forms makes me desperately wish for a new era of food television. Let me explain what I mean.

This is long, so here’s a quick TOC:

My favorite cooking show of all time is Nigella Bites. I watched it in 2002 when I first moved to Los Angeles, taking a second chance on a boyfriend and trying to figure out my new life in California. Our life together was almost completely different than it had been before, and I figured out how I wanted to exist in my new life by watching Nigella Lawson be a gorgeous domestic goddess on my television.

I bought Nigella’s first cookbook, How To Eat, which is a chatty and informal book about food and cooking as it fits into your life. It remains one of my most-loved books to this day—I don’t often make the recipes from it, but I sometimes take it off the shelf and just read it. I also have How To Be A Domestic Goddess, her book of baking recipes, which is my go-to for cakes. She’s written many cookbooks and hosted several shows since, but those early books and that first show remain my absolute favorites.

The other show I watched back in 2002 was A Cook’s Tour, Bourdain’s first television show, in which he traveled around the world and ate local cuisines. (He would later repeat this formula, with some changes, in No Reservations, then The Layover, and finally Parts Unknown.) I had read Kitchen Confidential and loved seeing its author enjoy food and culture from so many places that are so not New Jersey.

At the time that I read Kitchen Confidential, my boyfriend (the same one I later followed to California) was a bar manager and waiter, so we were very familiar with the world Bourdain described. (Not the drugs, though. Everyone we knew was a drinker.)

Anthony Bourdain and the Yangambi Research Library on the Congo River

Cooking shows can be aspirational or informative, and the best cooking shows are both. They can be instructional (from Julia Child in her kitchen to Ina Garten in hers) or travel-based (Anthony Bourdain and Guy Fieri embody the most common version of this type of show). There is a third category, competitions, but those are more game shows than cooking shows, unless you are talking about The Great British Bake Off (which is practically perfect in every way).

Instructional series tell you how to cook something, often omitting why it is done the way it is done; travel series tell you what people eat, but not always why or how. These shows are not wrong for focusing on a single aspect of food, but they are limited. In Salt, Fat, Acid, Heat Nosrat does something revolutionary: she explains why, along with what and how, by traveling and instructing (with a large dose of being instructed).

In part one, “Fat,” she travels to Italy and learns about olive oil, pork fat, and the making of cheese. My family came to America from Sicily in 1912 and watching “Fat” made me yearn to return to a home I’ve never known.

In part two, “Salt,” she travels to Japan and learns about moshio salt, which is cultivated from hondawara seaweed, miso, soy sauce, and dashi.

In part three, “Acid,” she visits Mexico to learn about different kinds of citrus and about an unexpected acid: honey.

In these three segments, she learns from experts, participates in cultivating, cooking, making, and eating, and cooks with local chefs.

In part four, “Heat,” Nosrat takes us home to her kitchen in Berkeley, as well as to Chez Panisse, the Michelin starred restaurant where she got her start cooking. She talks about the ways that the application of heat—and the type of heat—affect food, and she brings all four elements together to produce a simple meal with her friend Wendy Macnaughton, who illustrated Salt, Fat, Acid, Heat, and to learn how to cook a traditional Iranian dish with her mother.

(That video is not from the documentary, but it covers some of the same information in a more informational format.)

Books I wish Netflix would base docu-series on

It is my dearest hope that this docu-series will revolutionize food television. For me, it already has, but I want more.

There is really one book that, far and away ahead of every other book that has ever been written, I wish was a docu-series, and that book is The Cooking Gene by Michael W. Twitty. In the book, Twitty explores the history of African American food in a unique way, tracing genealogy, telling stories, and bringing both history and soul food into a new light.

Can you imagine what he could do with a budget and a filmmaker like Caroline Suh, who directed Salt, Fat, Acid, Heat?

Julie Sahni is best known for Classic Indian Cooking and Classic Indian Vegetarian and Grain Cooking, but my favorite of her books is Savoring Spices and Herbs. I would adore a docu-series where she explained flavor to me. I would be equally thrilled with a series by/about Madhur Jaffrey, who is an actress as well as a cookbook author, probably best know for Taste of India (and currently appearing on I Feel Bad).

Papa Andrea’s Sicilian Kitchen and Brucullina, America by Vincent Schiavelli tell stories about his Sicilian grandfather, the family cook, who shared his secret recipes with Schiavelli before his death. If you can find copies (I’ve seen them used on Amazon), you want these books. Whether you make the recipes or not (and you’d be bonkers not to), the books are worth reading for the lovely writing. Schiavelli died several years ago, else he would be very much on the list of people I wish would make docu-series about food.