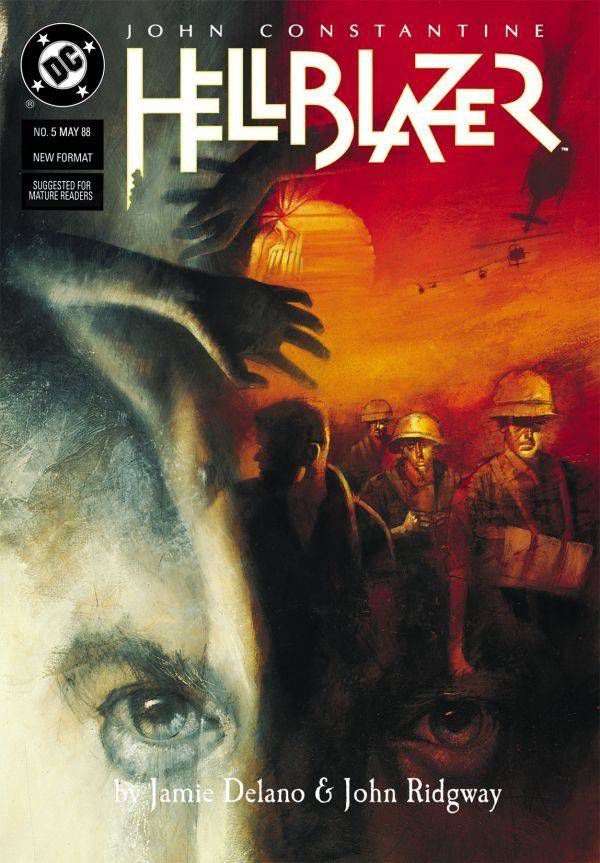 John meets Zed, and the two investigate the disappearance of John’s niece, Gemma. Also: we start to notice that a religious group called “The Resurrection Crusade” seems to be involved in a lot of happenings.

John makes a stop in the town of Liberty, Iowa, where they men who went off to Vietnam never returned home. Until now. The elderly mothers and fathers of the town have paid money to the Resurrection Crusade to have their prayers heard. Seemingly linked to one survivor, Frank Ross, who still runs a gas station on the single road that leads through the town, the lost marines are returning to Liberty, which they see as just another Viet Cong village. John remains the witness and bystander as the sinister drama plays out in the town. In the end, all John can do is play into it, which he does by ordering Ross to follow his unit off into the corn, presumably back into the jungles of Vietnam where the men all died.

So, what did we think?

Dave: Another one-shot story with the resurrection crusade being the connective tissue. Though, unlike the last issue, in which John was intimately involved because of his niece, he feels more like a bystander here. A witness. Which makes this story feel slightly more like a Twilight Zone episode. Not that that’s a bad thing.

Jay: That’s exactly what I was going to say. This is what the book would be if it was an anthology loosely tied together by the presence of John Constantine, a Rod Sterling figure who is more actively involved in the story. And, DC, if you’re reading, that’s pretty much a pitch right there. Deliver the contract to me by mail.

Dave: Heh, that’s a great pitch. I’d read that. With “Johnny Comes Marching Home,” I felt the the overall issue was nicely balanced as a short story that still gives us an interesting window into John’s view of the world. I also like how these little stories also serve to build that something is going on, and the Resurrection Crusade seems to have some involvement.

Jay: The “big bad” of the season, before that concept was even a thing.

Dave: Exactly. I think my biggest take away on the characterization of John in this issue is his humanity. John isn’t a driven obsessive vigilante like, say, Daredevil–

Jay: Oh you, and your hip pop culture references….

Dave: I’m in the zeitgeist! Anyway, yeah, as John is caught up in this escalating conflict, he very much shows his humanity by deciding that he cannot save Nancy, who is assaulted and ultimately killed by Frank, choosing to stay in hiding. Not that he doesn’t act… when he gets the opportunity to send Frank away, he does so, but it’s only once he’s he’s sussed out the situation enough to make a play.

Jay: I really liked this. A simple, and visceral, story that deals with the emotional affects of war and violence. The things that you can’t escape, the things that will haunt you. This feels like something a certain TV show could have done without too much hassle, if it had tried. Maybe switching Vietnam and a corn field for Iraq and some American desert town, or Afghanistan, or….well, you get the point. It’s also, at this early point in the series, completely amazing me that they managed to keep this book in print each month. Not for a lack of quality, but because this isn’t what the market supported, really. What chance would this book stand today?

Dave: Not much of one, I’d think. Maybe as some kind of Dark Horse horror anthology…? That’s the closest I can imagine. But not as a DC book — and certainly not if you’re tying John into the larger DC Universe, where the emphasis seems to constantly revolve around using the various DC characters and props.

Speaking of the setting: stories about Vietnam seemed to proliferate the 80s, which I suspect how long it takes the culture to absorb and begin to contextualize the horror and tragedy of war. It feels like Delano and Ridgeway are playing into that here, though interestingly Delano seems to make a comment about the proliferation of “realistic” Vietnam films at the end of the issue.

Jay: That was an interesting touch. I wonder, was it a comment on the pop culture obsession with “telling it how it really was,” or Delano feeling the need to ackowledge that he, himself, couldn’t do that? Or both?

Are you reading along? What do you think? How does 1988’s Hellblazer hold up? Let us know!