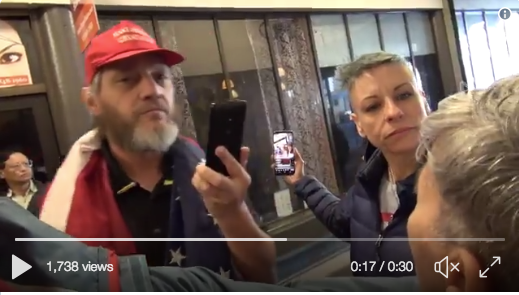 Revolution Books, an indie bookstore in Berkeley, Calif., was host to some unexpected and unwelcome guests on March 3rd. A group of conservative “activists,” armed with video cameras and the usual Trumpian rhetoric, gathered outside the store and threatened to burn it to the ground. Staff members of Revolution books stood their ground in the doorway of the store and prohibited entry to the party of so-called activists, who departed before the police could arrive.

The store tweeted about the original incident,

Pls RT.
Today fascist "Western Chauvinists" threaten our bookstore. Support @revolutionbksb & see talk by Avakian "The Trump/Pence Regime Must Go" about the roots of the fascist regime & their brownshits & how to drive it out of Berkeley & the White House. https://t.co/wUnAMCpgXW pic.twitter.com/3lTQhnzfp5

and shared their own video on their facebook page and website. They also hosted a news conference in the store on March 5th to spread awareness. And it seems to have worked! The story was picked up by a number of different news outlets and support for Revolution Books has been flooding in from both the online community and Berkeley locals.

After hearing about the threats on our bookstore by fascists, these high school women explain why Revolution Books is their favorite bookstore, listen…. pic.twitter.com/5ZKFMxtje7

The staff at Revolutions Books, which was founded upon the Marxist ideals of Bob Avakian, is used to the sort of behavior exhibited by this group of conservatives. Apparently, even over 60 years after the last “red scare”, anti-communist sentiment is still considered by some to be an All-American virtue. Involved in nine similar incidents last year, the store also receives multiple phone calls daily, either mocking its mission or threatening the establishment and its employees.

But despite the best efforts of its naysayers, Revolution Books is refusing to yield to intimidation. They’ve retained their regular hours, and volunteers have come forward from the community to provide a further degree of protection for a beloved local indie and its mission.

If you don’t live in the Berkeley area, but would still like to support Revolution Books efforts as they face these ongoing threats, you can make donations to the store via their PayPal. They also have t-shirts and a few books available through their website.