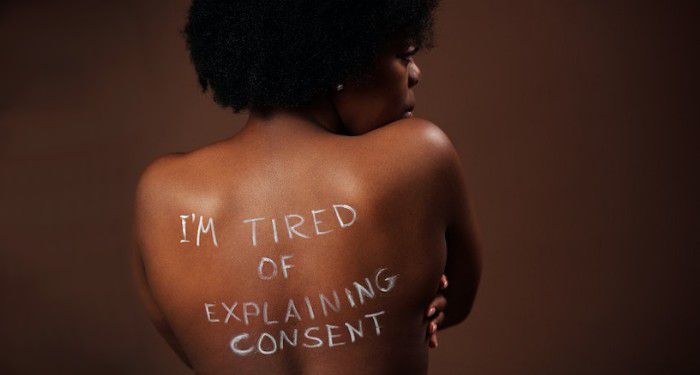 Romance novels have long been criticized as bodice rippers, smutty, trashy, girlporn, and filthy. The stereotype is women getting rescued from their own lives, being whisked off on a pirate ship against their will, and as Hillary Clinton put it, “women being grabbed and thrown on a horse and ridden off into the distance.” Which is interesting, because this genre, more than any other, prioritizes consent.

While there is a long and storied history of how romance novels got associated with a lack of consent, it’s important to recognize what consent looks like in romance novels today. (If you want the answer for how to respond to Hillary Clinton dragging romance, read Lisa Kleypas’s response.)

Consent in romance specifically is two (or more) people agreeing to be physically intimate with each other at every step. Body language and enthusiasm can be consent. Explicit consent is agreeing with words. Ideally, both are involved.

One of my favorite examples of this is in Susan Elizabeth Philip’s 1994 novel It Had to Be You. Phoebe is a survivor of rape and doesn’t believe that professional football player turned coach, Dan, is able to control his massive quarterback body. He promises to stop at her word no matter what. As the two get more and more intimate, Phoebe keeps asking him to stop when she feels overwhelmed. Dan stops every single time, even when he’s inside her.

“Stop,” she sobbed, even though she know he had gone past the point where he would listen.

But he rolled off. Fell back. Sweat beaded his forehead. “You’re killing me,” he gasped, his chest heaving.

She couldn’t believe he’d kept his promise, and in those moments she loved him.

No means no regardless of how far into the act a person is.

Romance novels are unique in that the reader can often be inside a character’s head. We know what they are thinking, if they want it and how much. It’s important to remember that the other character on page isn’t a mind reader though.

In Casey McQuiston’s One Last Stop, we are able to see August’s thoughts and Jane’s confirmation of what she’s reading from August’s body language.

“On the bridge,” August says, more slowly. “Where no one can see us.”

She shifts, adjusting her weight on Jane’s thigh, and closes her mouth on the sound that tries to slip out at the friction.

“That is literally the opposite of what I was about to say.”

“I mean…what if it’s the only chance we get?”

“Yeah,” August agrees. It really is a good point, pragmatically. They have finite resources of time and privacy. Also, August will die if Jane doesn’t touch her within the next thirty seconds. Which is another logistical consideration. “You — yeah.”

Authors of historical romance also include positive, or enthusiastic, consent in their books. Courtney Milan’s The Governess Affair is a perfect example. In this novel, Serena, a servant who was raped and becomes pregnant, marries Hugo in order to protect herself and her child. She realizes that she needs to consummate the marriage but has trauma and trust issues. It’s important to show that Serena is not only consenting, but giving positive consent.

But he kept removing her pins, one by one, scarcely touching her as he did so.

“What do you intend?” she asked.

“I am not going to consummate this marriage.” He found one last pin, dangling in her curls, and set this against the others that he’d gathered. He arranged them in his hand, a neat row of gray metal. “But you are.”

The heat of his body had warmed the pins. While she was staring at them in confusion, he closed her fingers around them.

Alisha Rai, author of the Hurts to Love You and First Comes Like, acknowledges that power plays a big role in her thinking about consent.

“In terms of consent, the dynamic of who holds the power and who’s using that power is something I’m really conscious of. The main thing when I write is — if we put consent on the back burner — I’m always keeping an eye out for what internalized thing am I falling into? Is it misogyny? is it racial stuff? Is it sexism? Is it consent? What thing have I internalized in some way — because we’ve all internalized stuff from society — what hole am I falling into? And there are times when I’ll read back a book and I’ll go, oh, something isn’t right. And it sometimes is as easy as, well, you played into the hands of whatever and you have to fix it. So I think for me, the main thing is keeping clear of any -ism that I may not even know that I have.”

In a time when cancel culture is being examined, it’s important to think about giving writers the opportunity to improve. What passes as consent today, might not be what is considered consensual in the future. Romance has its finger on the pulse of modernity and wants to do right by its readers.

“A lot of people who come to romance come to it so young, and they’re reading this when their brains are still figuring out how to interact with the opposite gender and their own gender. I think when you show people positive depictions of anything, but particularly consensual relationships and what respect looks like and what empathy looks like and what you should expect from your partner, when you show it to them when they’re younger or even when they’re teenagers or young adults, they internalize that. Then when they come across something that isn’t right — and our society is not right. It’s not right for men to behave this way. So when they see that, they should feel comfortable saying, “I have always been told this is wrong.” If we get enough people who have that mindset, it’s not as scary to reject it. It’s scary to reject it now, because you feel like you’re alone.”

Romance is also one of the most reliable places in society and culture to find examples of sexy consent. Modeling what is acceptable and not for young readers is important. While I know these books are not written for teens, we’re kidding ourselves if we think they aren’t reading them. Remember how old you were when you found your first romance and adjust your perspectives that kids today have even more access to information than we ever did while sneaking our aunt’s and sister’s under the bed books. Enthusiastic consent is the least we owe them.

If you liked this, you might like Romance Novels Are for Feminists and Romance Without Feminism is No Longer an Option.