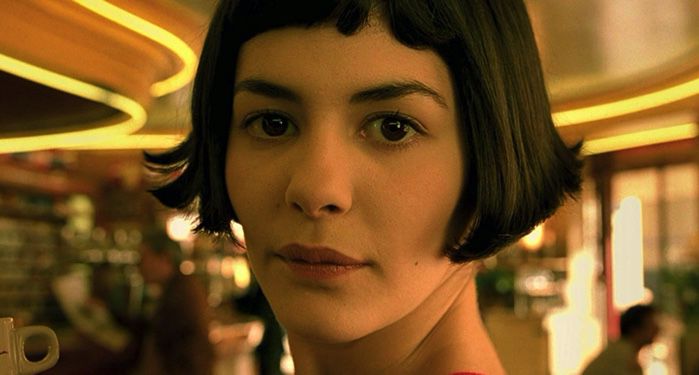 Jane Austen has had an incomparable influence on pop culture for over 200 years. The trope of two people who initially hate each other, despite powerful attraction, owes a huge debt to Pride and Prejudice. Romantic comedies often hinge on social or class ambitions, finding compatibility, misunderstandings, or characters’ attempts to interfere in others’ lives. Most viewers are aware that Clueless is a loose, ’90s high school retelling of Emma. As Autumn de Wilde’s adaptation of Emma opened on February 21, I thought of Emma’s less obvious similarities to another old favorite: Le Fabuleux Destin d’Amélie Poulain. Often shortened to Amélie, this 2001 French romantic comedy stars Audrey Tautou as a young Parisian woman in 1997, who tries to improve strangers’ lives.

Both Emma and Amélie are young women in their early 20s who constantly meddle in others’ lives, even if this requires deception. They serve as matchmakers, sometimes to friends who are unaware of their plotting behind the scenes. Emma and Amélie act as intermediaries between potential couples, lying and telling one person the other is attracted to them. Drama ensues. Both stories end with the protagonists finding romances of their own and knowing themselves much better.

Although these stories are set in different countries and centuries, the protagonists’ family lives have a lot in common, perhaps coincidentally. Emma and Amélie are both socially isolated women living with hypochondriac, widower fathers. Emma has managed her family’s home since her older sister married and their mother died. She’s sophisticated in some ways and immature in others. Emma’s father worries obsessively over his own health, while Amélie’s dad worries about Amélie’s. He mistakenly believes that his daughter has a heart condition, so he decides to homeschool her.

I’m not the first person to observe parallels between Emma and Amélie. A family member mentioned this idea to me when Amélie was recently in heavy rotation on HBO. Steven D. Greydanus at Decentfilms.com wrote: “Like Jane Austen’s Emma (and Valley-Girl knockoff Clueless), Amélie is about a young woman, in this case a Parisienne waitress, who meddles furtively with other people’s hearts and lives while remaining oblivious to the needs of her own heart.” This quote sums up the quirky, ironic combination of naïveté, maturity, and manipulation that Emma and Amélie share.

Despite their parallels, these two stories have significant differences in tone. Viewers often describe Amélie as “whimsical.” Amélie is motivated by her often-misguided senses of altruism and romanticism. She’s not only a matchmaker, but is, in the French narrator’s words, “a regular do-gooder.” Unlike Emma’s, Amélie’s plotting usually works. She reunites estranged family members, returns childhood keepsakes, and helps a disabled worker get revenge on his abusive, ableist boss. In an effort to get her dad out of the house, she pretends that his garden gnome is sending him postcards from all around the world.

As a French movie from the 2000s, Amélie is more genuinely sex-positive than most American or British movies from that time. It’s impossible to imagine an Austen heroine wondering “how many couples are having an orgasm right now,” as Amélie does.

While Amélie idealizes its heroine, Jane Austen famously described Emma as “a heroine  whom no one but myself will much like.” Although Emma also has good intentions, she’s overconfident in her own skills as a matchmaker and believes that her friend Harriet deserves to marry above her social station. Amélie, in contrast, doesn’t care about social status in the first place. She flaunts social conventions: for example, by ringing strangers’ doorbells uninvited.

Amélie isn’t exactly a retelling of Emma, but it has many parallels to Austen’s novel. I haven’t watched enough French films to see where Amélie fits in the canon. I’m not sure whether Emma influenced the filmmakers consciously, but both stories and their heroines are examples of the same archetype. They’re both sheltered young women from similar families who show a relatable mix of maturity and naïveté. They presume to improve—or meddle in—other people’s lives. People with the least experience on a topic often give the most confident advice. As Emma and Amélie gain experience in life and love, they learn that both are unpredictable. The details may change, but similar stories of timeless experiences appear across cultures and centuries.

Why Emma is the Worst Jane Austen Novel

The Queerness of Emma