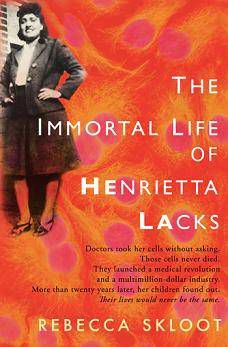 Thanks to the National Academy of Scholars, we no longer have to wonder why there’s been a recent run on The Immortal Life of Henrietta Lacks at the bookstore.

In this year’s edition of their annual Beach Books report, which looks at the books US colleges and universities assign as campus-wide summer reading, Rebecca Skloot’s bright orange account of the history and ethical lapses behind one of the most famous sets of research cells is the most popular. And the NAS is not pleased.

Why? Many reasons, among them “commodification” and “racial grievance theme,” appear in the report. After all, the NAS is an organization that lists “declining study of Western civilization,” “dorm-based indoctrination,” and “anti-capitalist, anti-democratic, and anti-freedom orientations” among the issues it’s most concerned with.

But what really gets them upset about Henrietta Lacks and other popular campus-wide choices like The Other Wes Moore, Nickel and Dimed, and Outcasts United is that these books were written recently. They’re not “classics.”

In a comment piece for the Guardian, the study’s lead author, Ashley Thorne, starts off with a reminiscence about being assigned Pilgrim’s Progress for her own campus-wide reading:

It was, so to speak, a mandatory beach book, not for credit in any course, but meant to be the basis for a campus-wide discussion on the theme of “difficulty”. Reading Bunyan’s 1678 allegory of Christian’s hike to the Celestial City was indeed an uphill challenge for us.

But the kids reading Skloot and Ehrenreich instead of Bunyan aren’t getting that “uphill challenge,” she argues, and more than that, they’re doing their part to fragment society and cut loose from all the fundamentals by not reading a book that belongs to the Western canon.

The NAS really, really wants to see more schools assigning old books to their student bodies. The report keeps returning to the topic:

By declining to assign works from formative eras in history, colleges are implying that students have little to learn from the past. Or perhaps they simply think students’ attention spans are too limited for them to want to pick up such a book and read it on their own. But colleges don’t make the effort to find out. As a result, common reading programs remain, merely, common.

Why are they so into the classics? Because that’s how it was done in the good old days:

Faculty members a few generations ago could assume without a moment’s doubt that every freshman would have easy familiarity with Julius Caesar, Leaves of Grass, Moby-Dick, The Odyssey, the Declaration of Independence, Genesis, and many others once considered essential.

Time for the NAS to take a deep breath. Step away from the “don’t touch my Establishment-approved reading list” signs. Save the complaints about how liberals are indoctrinating our youth for the substantive aspects of the college education, and look at the campus-wide reading for what it really is: a giant book club, minus (at least officially) the wine.

The report’s most basic flaw is that it takes the colleges and universities at their word when it quotes their rationales for asking all students to read a given book. “Cross-disciplinary exploration” and “set academic expectations” sound nice to the schools’ PR departments, but assigning a book unconnected to any class or assignment isn’t an academic tool, it’s a social function. Have the NAS members never heard their students ask, “Is this going to be on the test?”

Think of these assignments as smaller versions of the “One Book, One City” programs that have taken off over the last decade. In that context, the fact that the books are written by authors who are still around and available to speak on campus is a feature, not a bug, and not the devious money-grubbing conspiracy that the NAS sees:

There’s plenty of room to argue about what universities budget for speaking fees or their attempts to make these programs sound far more academic and high-minded than they are. But to suggest that the fundamental problem with campus-wide reading programs is the lack of classic literature is to miss the point entirely.