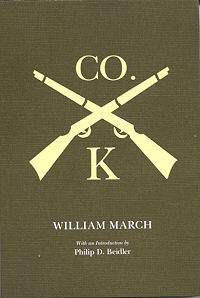 There aren’t all that many novels written about World War I from an American perspective, not that talk about the actual war as it was being fought. John Dos Passos wrote Three Soldiers, and Thomas Boyd did Through the Wheat. Hemingway wrote about the war, too, in his A Farewell to Arms, though not in quite the same way.There were a lot of novels written about life after the war, particularly the life led by the American expats who made Paris and other European cities home – the “lost generation.” Writing about the effects of war, however, is quite different than writing about what it was like to live through it.

Much of the literature written about the war by European poets and novelists, like Erich Maria Rilke or Sigfried Sassoon, dealt with the horror of war. They wanted their readers to stop thinking about going off to battle as something honorable and glorious, a sentiment expressed directly by Wilfred Owen’s “Dulce Et Decorum Est.” When William March sat down to write the 113 vignettes that would comprise the text of his novel Company K, he had no other purpose in mind than to tell the truth.

March, the pen name of William Edward Campbell, originally published the vignettes in this book serially in the New York magazine Forum. They were collected and published in novel form in 1933. The stories were based on Campbell’s experiences, and those of his fellow soldiers, on the front lines in France. He was a highly decorated soldier, earning the Croix de Guerre, the Distinguished Service Cross, and the Navy Cross. As Phillip Beidler explains, though:

…without the medals and citations we would know of his bravery.  For it is clear in the pages of Company K that this book was written by a man who had been to war, who had clearly seen his share of the worst of it, who had somehow survived, and who had committed himself afterward to the new bravery of sense-making embodied in the creation of major literary art.”

I read this book while taking a class on War and Literature in undergrad. It was one of those books that had to be purchased at the campus store because it was too obscure to be found anywhere else. The most recent edition was published by the University of Alabama Press, in 1989. It’s probably due for a new edition. It did just celebrate its 80th birthday, after all.

I didn’t know what to expect when I sat down to read. We’d been reading lots of unusual books for this class, and I was afraid that I would find myself staring at the pages of something complex and incomprehensible or that, as had recently happened, I would get too attached to the main character and his unhappy end would be my undoing. I was wrong on both counts. The text is straightforward, the story moves quickly, and the reader is never left alone with one character long enough to form a real attachment.

I know I’ve made it sound simple, but its not. By giving the reader a glimpse into the lives of all of those men, with their different ranks and their different backgrounds and their different attitudes about the world, March opened my eyes to what it must be like to be out there on the front lines, trusting yourself to people that you barely know, that you would never interact with back home, but that you would give your life to protect.  For an outsider, that this occurs makes not sense at all, but for March it made perfect sense, at least by the time he got it put down on the page. And after reading his words, I’m a little closer to understanding.

It is said that March once called it an “affirmation of life.” And it is, in that the men who make it home are glad to be there. They are doing what they can to make the best of the lift the lives they have returned to and to leave the horror that they endured behind them. That is what March did. But it is hard to ignore the anti-war sentiment.  It may not have been what he wanted to focus on, but it is very present. In certain chapters, particularly the ones in which they are dealing with a group of German prisoners, that sentiment just cannot be ignored. It is what kept Hemingway from including one of March’s vignettes in a collection he put together called Men at War: The Best War Stories of All Time.

Company K was not a commercial success, and it is pure luck that it hasn’t faded from memory. It has endured, I believe, because it is honest without being overly sentimental. The short vignettes, rather than long, rambling chapters full of exposition, paint a clearer picture and make a stronger impact. And that’s what makes it great.

I know that there are not many of you out there who have read this book. But, now that I’ve told you about it, I wish you would.

*I didn’t know that there was a film version until I sat down to write this. I haven’t seen it, but the reviews suggest that it’s pretty good for what it is – a low budget, but very sincere film.