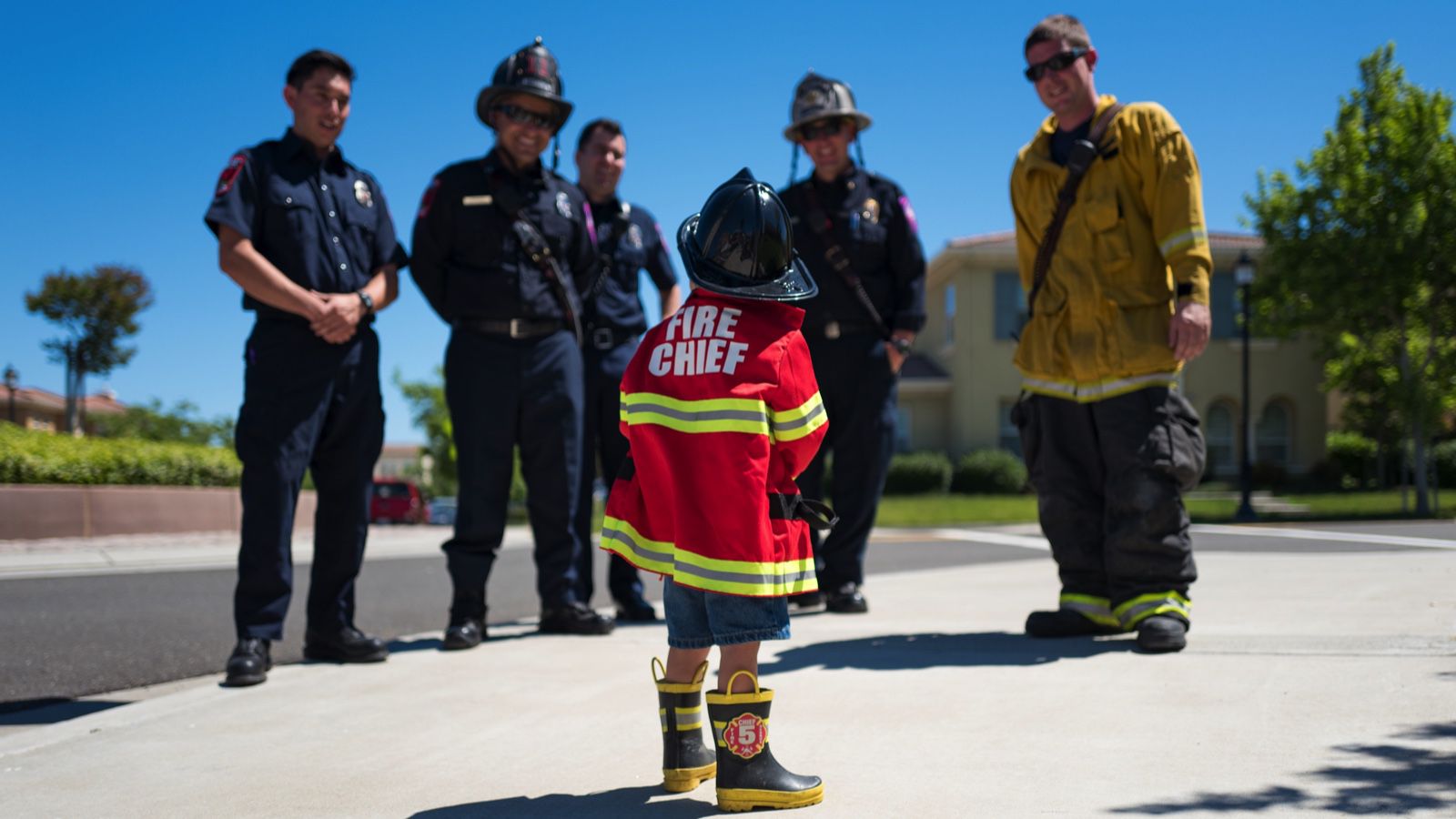 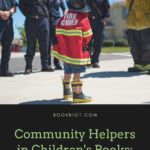 Community helpers star in children’s books from board books to picture books. As a former elementary school teacher, I remember the lessons we taught on this topic every year. Countless nonfiction books about helper professions crowded the shelves in our school and classroom libraries.

Sometimes, we hosted firefighters and police officers during these units. They’d talk to the children about their jobs and let them climb on the firetruck. The kids would leave school in red plastic hats or wearing gold badge-shaped stickers. We told them that these people kept them safe.

I remember how we taught these lessons alongside good citizenship and following the rules. We had school-wide reward systems around character education. I taught at an affluent, primarily white school. But teachers and administrators gave the handful of bused-in Black kids more lectures about rules and character.

In retrospect, I think about those books and those lessons more critically. I’ve since read the work of Paolo Freire and other scholars who discuss the politics of education. Education has never been neutral. According to Freire, “There’s no such thing as neutral education. Education either functions as an instrument to bring about conformity or freedom.”

Since 2015, police have fatally shot roughly 1000 people a year. Black and Brown communities are disproportionately represented in these killings. Though Black people make up 13% of the population, police shoot and kill them at more than twice the rate of white Americans. Police kill Latinx people at just under twice the rate of White Americans.

The COVID-19 pandemic has highlighted how our county really treats medical workers. Media outlets and commercials herald doctors and nurses as heroes. However, healthcare workers are facing resource shortages, overwork, isolation, and danger of infection.

The majority of healthcare workers impacted by COVID-19 are racially diverse (primarily Black and Asian American). Black healthcare workers make up a quarter of the population, but a third of the COVID-19 deaths among medical professionals this year. Additionally, while female medical workers are more likely to contract COVID, male workers are more likely to die from related complications.

So, why do we teach about “community helpers”? What makes a community helper, and what communities do they serve? Do these lessons liberate or domesticate?

Teachers follow their state standards when planning lessons. Forty-one states, D.C., four territories, and the Department of Defense have all adopted a common set of standards for literacy and math. However, standards for other subjects, including social studies, vary by state.

Interestingly, authors seem to have different definitions of community helpers. Among the most common are taxpayer-funded services: teachers, police officers, construction workers, and firefighters. However, the category includes many other professions as well. 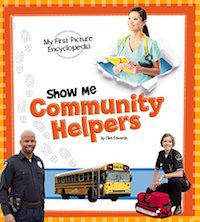 The book description mentions firefighters, doctors, and teachers. It includes 100 facts about the 16 professions. Interestingly, the cover includes a doctor, an EMT, and a police officer. The photographs noticeably subvert racial and gender stereotypes.

Okay, so in addition to being a former elementary school teacher, I am also a literacy professor and researcher. I spend A LOT of time reading, analyzing, and critiquing children’s literature. Basically, I’m forewarning you that I completely nerded out preparing this piece.

To determine what qualifies as a community helper in children’s books, I created a bibliography of roughly 150 texts. These were books that came up repeatedly in library database and internet searches for “community helpers”. Additionally, I looked at another 40 or so books that mentioned a helper profession not found in the first 150.

I promise I have a life. I just really enjoy research. And books.

Many books in the set included multiple professions, like the encyclopedia above. There were also books that focused on a single profession. Police officers and firefighters were most frequently featured in the single profession texts. 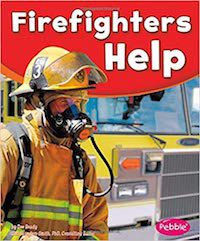 This informational text includes information on what firefighters do, their clothes and tools, where they work, and how they help the community. The text includes two to three simple sentences per page under short headings. It also includes photographs of firefighters. (The Amazon “look inside” feature shows only white-presenting firefighters, but includes Black children.)

I was pretty surprised at how broad the definition of community helpers seems to be. The books most often featured firefighters (20), police officers (20), and doctors (19). However, the text set featured several unexpected professions. These included construction workers (12), chefs/bakers (11), and mechanics (8).

I loosely considered community helpers to be people who provided services not at direct cost. Other books in the texts I analyzed that matched my inclination included teachers (16), mail carriers (11), and garbage collectors (8).

I won’t bore you by continuing to list numbers. Roughly 50 other professions featured at least once in children’s books about community helpers.

Who are the Community Helpers in Children’s Books

Next, I wanted to look at who was represented in community helper books. I looked at the covers of all the texts more carefully. Since I was relying on what I could see, I decided to focus on race and gender. I know that we can’t always tell a person’s race or gender by their appearance. Thus, my analysis is somewhat limited.

The community helpers were fairly equally balanced by gender. Of the 191 books, 75 covers featured female-presenting people. Ninety-one featured people who appeared to be men. Twenty-three others were unclear. (Their uniforms hid them or their photographs didn’t include faces.)

I could continue the research nerddom, but I think we can stop here. If you’ve gotten this far, you can probably see my point. Our school population has been “majority minority” for several years now. Yet our books are not representative of that. What messages are we sending our children?

Often, parents and teachers are under the misconception that children can’t handle complex conversations. Thus, we teach harmful and simplistic ideals. If you work hard, you’ll get ahead. Christopher Columbus discovered America. Police keep us safe. Laws should be obeyed.

So, what does a Latinx child believe about their hardworking parent who still struggles to provide? How does an Indigenous child reconcile the story of Columbus with the stories of her ancestors? How can you explain to a Black child that the police who assaulted his father were justified because he was protesting injustice after curfew? And what are white kids learning about who’s powerful and valuable in our society?

The truth is, children can handle complex conversations. Though adults may believe that it’s unhealthy to expose kids to conversations about race, gender, and inequity, it’s actually the opposite. Babies as young as three months begin to show racial preferences and kids start to internalize negative racial beliefs by age three.

Similarly, kids notice gender differences by age two and have a stable sense of gender identity by age four. They understand gendered expectations and norms. As with race, if we leave conversations about gender until kids are “old enough,” we are not preparing them for the world. Worse, we’re allowing them to internalize and perpetuate harmful stereotypes and inequities.

So what does all this have to do with community helper books? Well, instruction around these books is one of many opportunities to help children think critically about the world.

Imagine a world where our community helper unit featured books about people who have fought for social justice. When kids learn early that “heroes” are people who make mistakes, they’ll be better equipped to advocate for their rights. They won’t believe that systemic inequities reflect their worth. How empowering would it be to teach children that we can all be helpers?