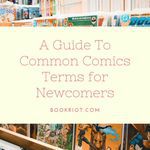 So you’ve picked up a copy of Smile or Fun Home or Black Panther: A Nation Under Our Feet and you are totally digging it. Words! Pictures! Words and pictures! You got your chocolate in my peanut butter! etc. etc.

But what exactly is this thing you’re reading? Is it a comic? Is it a comic book? Is it a graphic novel? And will people make fun of you if you call it the wrong thing?

The general term for the thing with the words and the pictures and the speech bubbles is comics. That’s it! It’s super duper simple. It is a comic. You are reading comics. This applies whether you are picking up the latest issue of Batman, or chuckling over Garfield’s latest Monday tribulations, or perusing a serious work like Persepolis. Comics is a catch-all term for the medium and the form and the category. They are all comics.

(Another way of describing this method of storytelling is sequential art, i.e. art in a sequence. This term was coined by the legendary Will Eisner in 1985. All comics are told via sequential art, but it’s a way bigger mouthful. Just say comics.)

Okay, so what’s the difference between comics and a comic book? Colloquially speaking, the term comic book is usually applied to periodicals. So an issue of Wonder Woman or Spider-Man or Jughead is a comic book, but a longer work like the aforementioned Smile or Fun Home wouldn’t typically be called a comic book, just a comic.

In other words, if the comic is a book, it’s not a comic book. I’m so sorry.

Honestly, though, if you mix them up, it is 100% not a big deal. It’s casual terminology. There is no comics police. (Death to the Comics Code Authority!)

What about the stuff in the newspaper? Garfield, Peanuts, Calvin & Hobbes? Those are called comic strips, which makes sense when you look at the shape of them. Comic strips also fall under comics. If they’re collected in a book form they are still comics, or a comic strip collection, or hell, even a comic book, please don’t stress out about it.

If it originated online it’s a webcomic. Webcomics are still comics.

But wait, what about graphic novels?

So you’ve heard someone say that the proper, grown-up, serious term for them is graphic novels. And sure, graphic novel works! (The term, by-the-by, was coined by comics historian Richard Kyle in 1964 and popularized in the mainstream in the ’80s by books like Art Spiegelman’s Maus and the works of creators like Frank Miller and Alan Moore. The more you know!) It’s a totally valid term. It’s what Barnes & Noble uses to label their shelves. It’s fine.

The problem is, so few of the books typically referred to as graphic novels are actually, you know…novels.

Maus is the graphic nonfiction account of Spiegelman interviewing his father about surviving the Holocaust. Persepolis is a graphic autobiography. Fun Home is a graphic memoir. Even The Dark Knight Returns and Watchmen are collections of previously published periodicals; they’re fiction, but they’re only loosely speaking novels.

So yes, you can use graphic novel to describe any of these things and people will know what you mean, but it’s a pet peeve for many fans (especially here at Book Riot) because the word “novel” doesn’t actually apply to so many of these books. Moreover, reaching for graphic novel can carry an air of snobbery, like you’re searching for a more highfalutin phrase than comics when really…they’re all comics. And there’s nothing wrong with that.

By all means, use graphic novel when you’re talking about a novel told in graphic format! And use graphic memoir or graphic nonfiction or graphic…I don’t know, cookbook or whatever, in the cases where that applies. But don’t shy away from comics because you think the word is inaccurate or lowbrow.

They’re all comics. And comics are great.

A trade paperback has, frustratingly, several definitions in publishing, but in the comics word it’s generally used to mean a collection of single issues, e.g. Ms. Marvel #1–6 was collected into a trade paperback called Ms. Marvel Volume 1: No Normal.

Manga simply means comics created in Japan or in Japanese and encompasses a massive range of genres and visual styles. I am far from an expert, but I mention it here because it’s another term that’s often thought to refer to a small, pigeonholed thing instead of a vast art form. Manhwa is the corresponding term for Korean comics.

I hope this helped! Still not sure what words to use when? Tag in Book Riot to ask us on social!