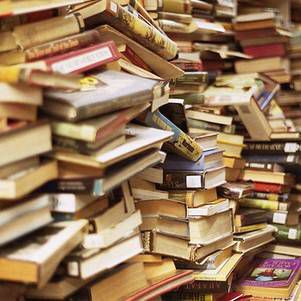 This is a guest post from Tiffani C. Willis.

In 2012 I started a blog called Passport Books where I could ramble, rave, and rant about books as much as I wanted (family and friends could only take so much book talk). My blog is named Passport Books because books and reading have been always been a way for me to travel to different worlds and lands, both real and imagined. When I’m not reading or writing about reading, I’m traveling or enjoying a glass of wine, sometimes also while reading. Follow on Twitter @PassportBooks.

Whenever I get close to finishing one book I start thinking about what to read next. I like to have something ready. With the exception of a half-dozen books that I inherited and keep for sentimental reasons, no book goes on my shelf until it has been read. Unread books live in my unread pile in the corner of my apartment. (The phrase “to be read” or “TBR” did not become known to me until I started using Goodreads a few years ago. I still like unread.)

My unread pile is now nearing the 350 mark. It wasn’t always like this. In fact, I can remember the exact moment when I started consciously building an unread pile. I was living in New York at the time. One night, as I was coming to the end of the book I planned to finish that evening, I glanced at in the direction of the unread pile and realized there were only two books in my apartment that I had not yet read. Worse, I wasn’t especially interested in reading either of them at the moment. Panic began to set in. What was I going to read on the train to work the next morning? So instead of finishing the book in my hands, I immediately got up and went to the bookstore. By the time I returned home my unread pile had grown by five books.

Being without something to read is a fear of mine. I know that sounds silly, but whatever, I worry about running out of stuff to read. It is for this reason that I bring a book, occasionally a magazine, just about wherever I go even if I know realistically there will be no time to read. If there is the slightest chance I am going to have to wait for someone or something, as long as I have something to read I’m fine. Some people need stretches of time to get into a book. I’m just as fine with one minute increments as I am with hour long reading sessions.

Though I grew up reading I don’t actually remember owning that many books as a child. My family didn’t have a lot of money and books were a treat and a treasure. They were something I saved up for. I spent hours of my childhood in bookstores agonizing over what to get. When funds are limited the choice is that much more important. Of course I visited libraries and borrowed books, but there was always something about owning a book and not being at the mercy of a due date.

In 2002 I started a new job and for the first time in my adult life I was making enough money that there was actually some leftover not only after the bills were paid, but even after putting some aside for savings. What to do with the extra money? Well some people buy cars; some people buy shoes or purses; I buy books. Okay, I bought shoes and purses too. I also traveled. But mostly, I bought books. I think to some extent the ability to buy books without worrying about the cost became something of a symbol of financial stability and success, two things I had always craved. Also I just really love books. Actual books made out of paper, not ebooks or audio books, but books that I can hold in my hand, flip between pages, and keep as long as I want.

After four years in New York I moved back to my home state of California. I unpacked by boxes, set up my book shelves, and set up a new unread pile in the corner of the living room. After a year or so I noticed that the small pile of unread books had become a big pile. Although I liked, no need, to have an unread pile, I didn’t want it to become a mountain. So I did what I always do when there is a big task to be done: I got out a pad of a paper, a pen, and made a list. By the time I was done there were 93 titles on the list – a daunting, but not impossible number of books to get through.

For a while I made great progress, cutting the pile down by a third. But eventually I once again started acquiring books faster than I could read them. Several factors contributed to this. Obviously I buy a lot of books but I get surprisingly number for free either as gifts or through library conferences and book festivals. However they were acquired, my unread pile has become a series of three piles.

Should I be worried about this? I’m not sure. On the one hand, I am reading more than ever and that feels good. Still, I do want to reduce it to some extent. I’m not sure what the right number is, but 350 seems like too much. One of my goals for the year is that of the books I read this year, at least 36 to 50 have to be a book acquired before January 1, 2016. That would be about one-third to one-half of the total number of books I will mostly read during the year. I am trying to weed my collection and pull out books for gift or donation that sounded great when I got them but now seem a little less interesting. This is really hard because all my books seem so promising and giving them away feels a little like giving up.

The hardest part in reducing my unread pile, is not making it bigger. So far this year I have been pretty good about not buying too many new books and have watched my unread mountain slowly shrink. Most of the books I have bought were ones I had long since planned to buy and was waiting to be published in paperback. (I rarely buy hardbacks). But as I write this it is about a week before one of my favorite book related events of the year: the LA Times Book Festival. A week or two after that my book club has plans to visit the new all romance bookstore, The Ripped Bodice. All the discipline I have maintained so far in not buying loads of new books will likely disappear with these two events. Oh well, at least I no longer have to worry about running out of things to read.