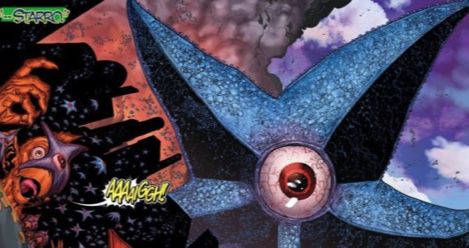 Then again, at baseline, what supervillain doesn’t? The nightmare lunacy is what makes them terrifying. The fact they couldn’t really exist but…but what if?

Life is always a little more insane than we think it can be. Just when we think we’ve hit the limit, it turns out  someone can take things a tiny bit further…

The Joker is only a clown gone one step further.

The Penguin is only a fetishist gone one step further.

In the grand scheme of comics, is a giant starfish who lives in space with the ability to take control of puny human minds really that weird?

Yeah. No, you’re right, it’s still pretty out there.

Then again, the depths of the ocean are often more mysterious than the far reaches of space at this point. Why not look to them for alien inspiration?

Created by Gardner Fox and Mike Sekowsky, Starro first appeared in The Brave and the Bold #28 (February/March 1960). He was, in fact, the first villain to face the original Justice League of America, and popped up periodically thereafter in various books, including Aquaman, The Justice League, and Captain Carrot and His Amazing Zoo Crew, always bringing our heroes, and our world, to the brink of disaster. 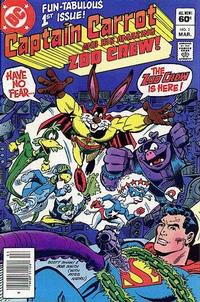 Starro originally came to Earth intending to steal knowledge from the planet’s scientists. He happened, incidentally, to explode an atom bomb, and take mental control of the residents of Happy Harbor (which you may remember from such awesome DC animated shows as Young Justice) and Rhode Island (which you may remember as a state with not many people so maybe kind of a wasted effort). Badly injured by the JLA, Starro is able to convince compassionate Earthlings to care for it until it regenerates to its original form from its own remains (recent research suggests that not only can some starfish regrow damaged limbs but may be able to regenerate bodies from severed legs). Starro renews its attack against the Justice League and sends clones to conquer New York (which makes a lot more sense than Rhode Island, IMHO), only to be thwarted by Superman with the assistance of the aforementioned “Zoo Crew” (I got nothin’. Giant space starfish vs rabbit? My money is on the starfish 100% of the time).

Convincing Green Lantern Kilowog to bring him back to his ship during his recovery, Starro blows himself up which, rather than proving fatal, creates thousands of tiny Starros, all with the psychic of the abilities of the original, to fall back toward Earth. Kilowog. Seriously. What were you thinking?

A different version of Starro (the advantage of asexual spawning via spores—one of them always survives and you don’t even need a Lazarus Pit) grabbed Wally West’s brain and those of his neighbors in Blue Valley; the JLA jumps in but the Spectre (ultimate DC killjoy), then inhabiting Hal Jordan’s body (martyr complex the size a South American dictatorship given the power to tear the guilt from the depths of the souls of others), warns them that Starro’s plan is to take control of the supers and their abilities. The metas have the Spectre remove their powers temporarily and Batman, yet again, has to save the day. He is certainly very surly about it.

During Infinite Crisis, Starro joins Lex Luthor Jr.’s League of Supervillains and battles the Zoo Crew again, this time defeating them. I have no idea what it is between the starfish and the sentient animals, but clearly this feud isn’t going anywhere. Starro disappears, then reappears as a member of the Sinestro Corps, wielding five power rings and controlling several supervillains. He is ultimately defeated by Bart Allen, which, given the stats on five power rings, I have a very difficult time believing. Because I’m sorry, five power rings (did I mention it had five) vs one Flash doesn’t. Line. Up.

According to the DC Wiki, the Starro moniker not only refers to the giant cosmic star fish but also to a New Earth dual entity consisting of the starfish shaped alien species (the Star Conquerers) and Starro the Conqueror, a humanoid of the Hatorei species who uses his psychic abilities to gain control of the Conquerers, forcing them to do his bidding. 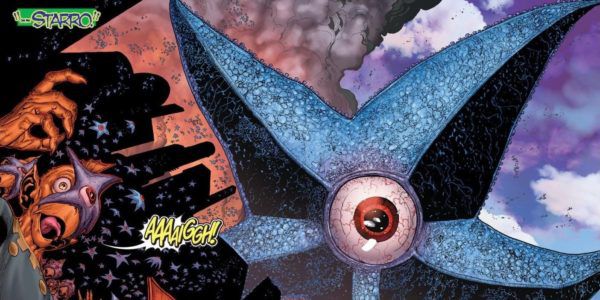 In alternate time lines, New Earth Starro has attempted to take the Hall of Science and the knowledge stored therein. He was thwarted by Wonder Woman and Martian Man Hunter. It also took control of Rip Hunter and used him to send Starro spores back to 1348, taking control of the entire world. Booster Gold was able to use the Time Sphere to correct the anomaly.

Oh, and then there was that time he tangled with Lobo’s pet space dolphins in the aptly named Starro and the Space Dolphins. I mean, this crustacean has range.

Starro has also made appearances in various DC screen properties, though it isn’t always named directly, including: Arrow, Flash, Batman Beyond, Smallville, Superman: The Animated Series, Batman: The Brave and the Bold, Young Justice, and Robot Chicken: DC Comics Special 2.