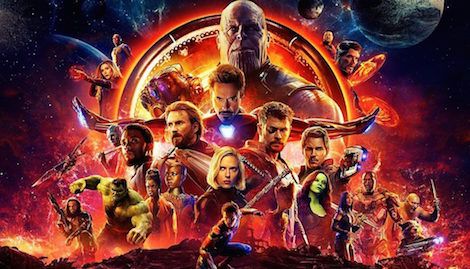 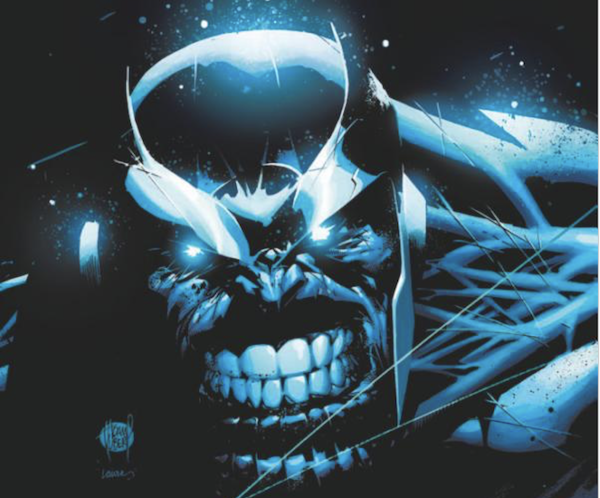 When the first Avengers: Infinity War trailer dropped last year, I realized there was an Infinity Gauntlet–sized hole in my comic history, so I immediately amended that. It was only after fellow Book Rioter Shiri Sondheimer posted her articles about the history of the Mad Titan that I realized I was going to have to dig deeper if I wanted to absorb all the source material for the coming cinematic superhero murderfest.

So I fired up my iPad, launched Marvel Unlimited, and browsed the Comic Events category for Infinity. The screen of covers that popped up was daunting. Some directly told the main story, others were only ancillarily related, and still others didn’t need to be included at all except they managed to get a single hook into the main event (these were all part of the Marvel NOW! imprint, for those following along at home).

It took me nearly a week to slog through everything in published order. While there were some excellent story beats throughout, and at the end of the event I had a much better idea of how Thanos and his lackeys are going to be used in Avengers: Infinity War, I found myself longing for the tight, focused storytelling of the first Infinity Gauntlet comic.

Here are the titles to read, the ones that you can safely skip, and what you should avoid altogether. 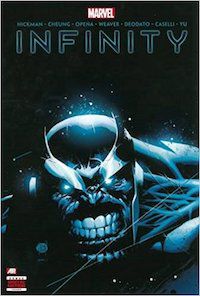 If you want just the main story, this is the title to pick up and power through, right? It’ll give you everything you need, since the name of the event is the title? It’d be nice if it worked that way, but no. That’s not to say that things don’t happen—major, universe-changing events do happen in the main title, but when read with the other main titles, Avengers and New Avengers, it can feel very Groundhog Day-ish. Not only is there a recap at the beginning of each issue, but the events that occur are usually things that are also happening simultaneously in other titles. Ideally, these scenes would be from very different points of view, but too often, in both comics, they’re exactly the same but with different art and maybe a few extra lines of dialog before the story advances. Reading it on Marvel Unlimited, it was annoying, but buying the series issue by issue, it must have been infuriating.

It’s unfortunate, because the story of Thanos’s quest is an exciting one. Despite this being the basis for the movie, in this comic he’s looking for something quite different than the Infinity Stones or the Gauntlet. And that only constitutes part of the story of the event. The rest serves as a flashpoint for major, universe-changing events that comic readers have become very familiar with over the past few years: the collapse of the Marvel Multiverse (leading to Secret Wars and Battleworld) and the free-floating Terrigen Mists (responsible for so many things, but most importantly Ms. Marvel!).

But movie fans need not worry, even if you strip out the Builders’ and Inhumans’ stories, you can see the bones of the upcoming film. Thanos is at his most glowery, arrogant best. You get to meet all of his henchmen, the Black Order, and see how truly manipulative and lethal they are. And you get a hint of how major set pieces seen in the movie trailers may come together in the film. If you only want the broadest sketches of the event arc, just grab Infinity. But if you want to actually understand what’s going on, then you need a few more titles. 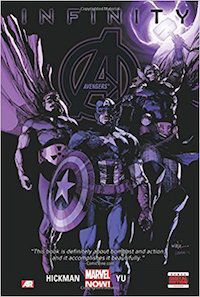 That’s because the rest of the main story event is split up among the main Avengers titles. Not surprising, since it’s the Avengers that are dealing with the invasion from the Builders in deep space as well as Thanos’s appearance on Earth. What is unfortunate is that these two comics suffer from the same retreading that Infinity does, retelling the same scenes with little or no new information added. It moves the story along at a glacial pace and makes me wonder if there really was three comics’ worth of story in the main Infinity event. 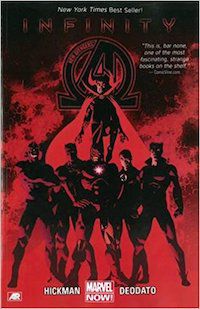 As you’re reading the third retelling of a major event that you’ve already seen told first in one comic and recapped in another, the story feels spread thin. You do get more ground-level stories, more impressions of what’s going on from characters like Spider-Woman and Black Widow (which is refreshing, as it can get tiring constantly seeing nothing but the grand declarations from heroes like Captain America and Captain Marvel). But ultimately, these two titles could have been condensed into one and possibly rolled into the main event title. They have the rest of the story that you need to truly understand what’s going on in the event, but their split publication robs them of being as enjoyable of a read as they could be.

If you’re pressed on time, but want to delve a little deeper into the core event, these titles have a direct effect on events in the main Infinity title (or are good enough to warrant checking out). 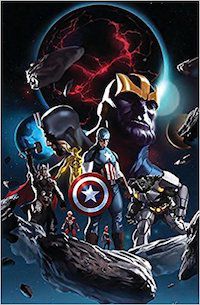 Guardians of the Galaxy

While I wish the Guardians had a little more to do in Infinity, what they do get is more than enough. Despite the fact that two of their number have sworn to kill Thanos, multiple times, and the fact that Peter just maybe might be responsible for him being back from the afterlife in the first place, the purple-chinned one is dropped almost immediately in favor of a fun bit of side work for the crew of the Milano. In order for the Avengers that were in space to get back to Earth, they have to disable the planetary defense system aboard the S.W.O.R.D. satellite base that’s been hijacked by the Black Order. There’s a fair amount of wise-cracking, lots of utterances of Rocket’s favorite catch-phrase…and also some discussion on how it unnerves the flark out of everyone that isn’t Rocket. The only problem? This is, like, the third or fourth “Volume 3” of the GotG run, so figuring out where to read this outside of MU is about as easy as listening to Hamlet as read by Groot. Grab the Infinity Companion instead that collects the Guardians issues and a bunch of the others in this list. 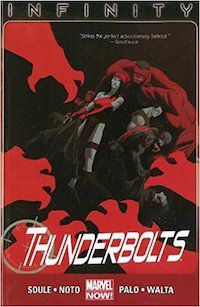 Technically, Thunderbolts is 100% skippable. The events that transpire here have zero effect on the main storyline, but the team of misfits comprised of Elektra, Red Hulk, Venom, Punisher, Deadpool (and Red Leader?) is so dysfunctional, it’s a wonder that the entire group doesn’t end up as paste by the end of the tie-in. The issues are worth it just to watch Deadpool on his quest to find the best pizza joint in NYC. Pro-tip, keep reading past the Infinity tie-in issues for a particularly wicked epilogue. 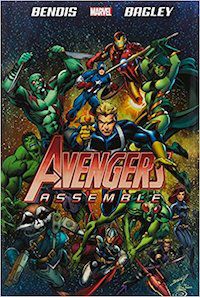 Once the Terrigen Mists are unleashed on New York City, Marvel created a bunch of side stories featuring newly-empowered Inhumans to pull additional titles into the main Infinity event. The problem is, they’re mostly one-offs that have little to know lasting impact. This is one of those. The comic is actually a fun trip with Wasp into the Microverse, and there are some solid emotional hooks about personal development and internalized trauma. If you’re going to read anything in this list, it should be this one, but you’re not missing any big Infinity story beats. 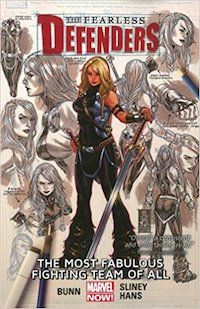 The far-too-short-lived all-female superhero team takes a turn on the Infinity train as they do what they do best: kick ass and give a recently empowered Inhuman the confidence to do the same. Sadly, this was Fearless Defenders’ third (?) crossover in about as many months. Rather than boosting sales, I think it was the lack of a through-story that ultimately doomed this comic. 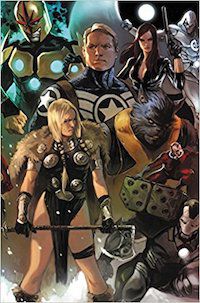 What would a crossover event be without S.H.I.E.L.D. coming in and messing with things? In this case, it’s yet another freshly-minted Inhuman, a S.H.I.E.L.D. agent no less, that has to quickly figure out what she can do, and then get to the front lines to save citizens in New York City. What makes this one fun is the inclusion of Agent Coulson and Nick Fury. Those characters alone help Secret Avengers feel more like a MCU tie-in than a comic universe tie-in. There’s a nice bit of development as Sarah figures out what kind of hero she wants to be, but as happened with so many of the new Inhumans that came out of the Infinity event, after the dust settled she was never heard from again. 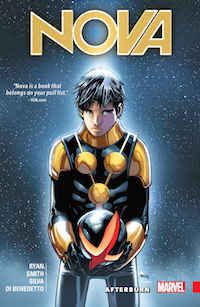 More thought out than many of the other crossover titles, Sam not only got a brand new, totally disgusting, Black Order villain for his Infinity arc, but a deeper connection to the universal mythos as Thanos tasks his henchmen with taking care of the wielder of the Nova Corp helmet before they can interrupt his plans. It’s over a bit too quickly, but it makes for an enjoyable read if you’re a Nova fan. 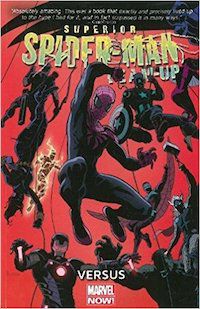 Guesssssss who has to fight a newly-hatched Inhuman spawned by the Terrigen Mists? That’s right, it’s everyone’s favorite 8-limbed villain hiding out in Peter Parker’s body. Superior Spider-Man was perfectly executed and I’m always happy to read a little bit more of how Otto Octavious was a better Spider-Man than Peter ever was. Even better, you get to see what the Might Avengers are up to without having to read their actual title (more on that in a bit). It’s a fun couple of issues, but you only really need to read it if you’re a Spidey fan. 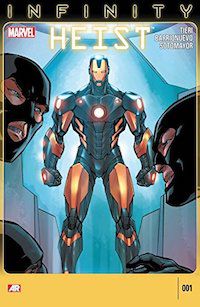 I loved the concept of this Infinity-only title: a bunch of criminals get together to rob Iron Man while he and the rest of the Avengers are busy saving the universe. It does lean a bit on the Terrigen Mists trope, as one of them finds out that he’s got Inhuman DNA, but that ends up being a blip in a fairly fun caper comic.

An ambitious title, where all the young heroes of the Marvel universe are brought together in a “Contest of Champions” that quickly becomes a fight for survival as their various schools are targeted. Unfortunately, the tone is all over the place, with some awkward humor, some stalwart dedication to their home country, and some socially tone-deaf character sniping (not literal). The best way to sum up my lack of a recommendation for The Hunt is that I had to keep going back to my comic list to remind myself what it was about. It’s utterly forgettable and completely skippable.

Infinity: Against the Tide

How skippable is this tie-in? So skippable that Marvel skipped it. That’s right, I didn’t even know this comic existed because Marvel didn’t include it in their Infinity collection on Marvel Unlimited. 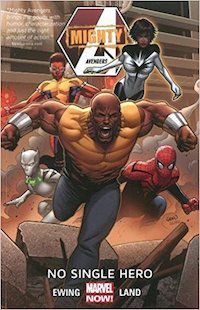 Three words: Greg. Fucking. Land. As soon as I see his art on a book, I know that it’s a throwaway title and this one is no different. Thanos and the Black Order show up in here, so you’d think it would be essential, but it’s not. The hook is a throwaway and ultimately has zero impact on the main event. The writing is wooden and the art is nothing but page after page of Land’s lifeless screen capture tracings (with the occasional giant monster thrown in, which he does do well, I’ll give him that). Every time one of these titles came up in the read order, I tensed up and hoped that it would give me a reason to change my mind. It never did. Avoid at all costs.