The big bad of the Marvel movie universe has been fully unveiled. In the recent Avengers: Infinity War trailer, we finally got our eyes (and ears) on the Mad Titan himself, Thanos. Since the first Infinity Stone was revealed (way back in the first Thor movie) Marvel-philes have been clamoring for exactly this, knowing that there was only one possible conclusion to the introduction of the powerful artifacts.

But what if you don’t know your Infinity Stone from your Cosmic Cube? What if, to you, Thanos looks like a dude that took his California Raisin cosplay a little too far? Here are some classic Marvel events to get you up to speed. 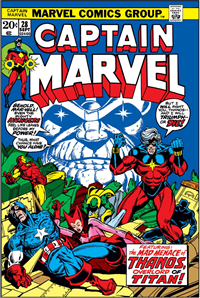 Even before he controlled the Infinity Gauntlet, Thanos was a thorn in the Marvel universe’s side—consolidating power and interfering in the lives of superheroes to further his goal of attaining godhood and impressing Death herself. Yes, even at the character’s inception, Thanos was a creeper, convinced that a show of strength was all that was needed to impress his object of desire. It’s a refreshingly slow build event, with Thanos appearing in the shadows of other, unrelated comics before being revealed. And even then, his plan is doled out in dribs and drabs as he pops up in everything from Iron Man, to Daredevil, to The Avengers, to Captain Marvel.

Oddly, this introduction of Marvel’s greatest villain was never fully collected, but the most important parts—Thanos’s big reveal moments, his acquisition of the Cosmic Cube, ascension to (temporary) godhood, and his ultimate defeat—can be found in the Captain Marvel Complete Collection. Some of these issues, as well as various related Avengers and Daredevil issues are also collected in the Avengers vs. Thanos trade. If you have Marvel Unlimited, you can find a big chunk of the tie-in issues in the back catalog. The Comic Book Herald has an exhaustive issue guide. 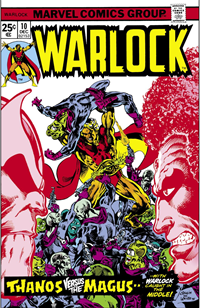 Thanos doesn’t as much return in this arc as he just shows up and Captain Marvel has to break in for a couple of pages to quickly explain why he’s back when he’s supposed to be nothing more than a bad memory. Mostly it’s an Adam Warlock story (who has his own twisted history of cosmic death, rebirth, insanity, and godhood—just you wait until that coffin at the end of Guardians of the Galaxy 2 opens up) where one of the Infinity Gems, the Soul Stone, debuts. It’s this Warlock run that gives readers a hint of how deeply powerful these artifacts are (and that there’s more than one). Of course, it attracts the attention of the newly not-dead Thanos. Warlock is able to wield it to fend him off before the Soul Stone breaks him utterly and imprisons him, leaving ownership of the Gems in flux. Adam Warlock shows up time and again after this in the Marvel Universe, sometimes as an ally, sometimes as a villain, but almost always as a cosmic hot mess. You can catch the “Thanos Returns” storyline in the Warlock Complete Collection. 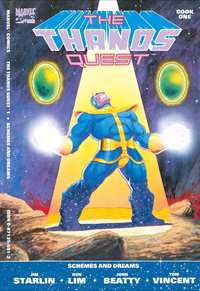 In the Marvel Cinematic Universe, everyone has been squirreling away Infinity Stones (nee Gems) and using them to power androids (Vision), trick demigods of alternate planes (Dr. Strange), beat Kree warriors (Guardians of the Galaxy), teleport around/power weapons (Loki), and buff up their collections (The Collector). Leaving them mostly in the hands of Earth-bound individuals who have absolutely no idea of their universe-altering potential. In the comics, though, Thanos has to travel from planet to planet and outside reality itself to find the Infinity Gems, plucking them from their holders (all cosmic-powered beings in their own right). But to even get the chance, he has to convince Death to loosen the leash she’s got him on so that he can fulfill his promise to her to kill half the sentient life in the universe (their relationship is…not healthy).

It’s a quick-paced but jam-packed series of two comics with over 100 pages between them. Not only does it provide the origins of the Gems themselves, it gives ample insight into Thanos as a character and his (misguided) honor code. 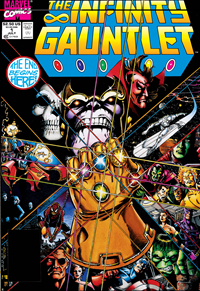 This is it! The main event! The storyline that inspired the movies! After gaining access to the power of the Infinity Gems and creating the Infinity Gauntlet, Thanos has the power to shape time, reality, and everything in-between. Besides upsetting the natural order of the universe by altering at his discretion every primal force of said universe, Thanos’s plan to kill half of all life in the universe is actually successful. In fact, with all the Stones assembled, the ease at which Thanos fulfills his promise to Death is practically an aside (she remains unimpressed). Infinity Gauntlet, then, becomes a post-apocalyptic story as the remaining heroes are forced to band together with unexpected allies and undo the damage wrought by Thanos. It’s Thanos’s obsessive love of Death that is his ultimate undoing as he becomes increasingly unstable with every spurned advance.

Thanos is a fantastic character study. He’s undoubtably a villain, but also one of the greatest intellects of the Marvel universe. Here’s a being that’s intelligent enough to suss out the source of all power in the universe just by meditating upon a portal (that holds all the knowledge of the universe, so there’s that). Who is able to expand his perception and use his intellect to not just understand how the Infinity Gems are tied to the underlying fabric of reality, but rework those fundaments to suit his own purposes. But emotionally he’s a petulant child, unable to comprehend why he his is rejected, defeating others in the cruelest fashion he can because it reassures him of his own power (reminds me a few current world leaders). It makes for some of the most masterful and memorable classic Marvel storytelling. 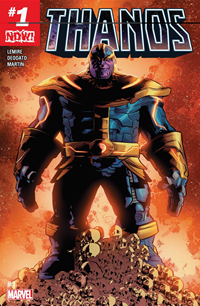 Once you’ve powered through Infinity Gauntlet, there are plenty of additional Thanos stories to check out if you want to see how he’s currently being treated in the comics. Infinity is probably the most important of these, as it shapes the Marvel Universe into what we currently see on the stands. But if you want something that focuses just on the big guy himself, check out the Thanos monthly series (starting with the confusingly titled Thanos Returns, which is different than “Thanos Returns”). There, the Mad Titan has the opportunity to contemplate a much more immediate mortality, his own.