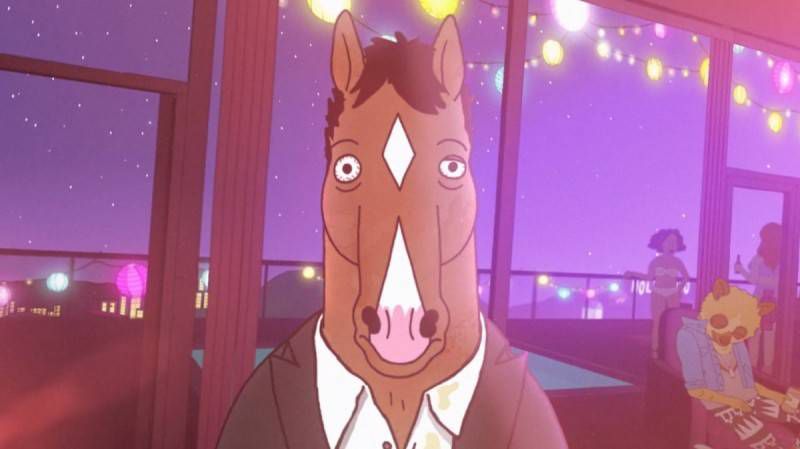 BoJack Horseman season two premiered on Netflix last Friday, to the delight of pretty much everyone who took the time to watch season one. It’s such a bizarrely good show — set in a universe where humans and anthropomorphic animals live in monotony together, the series focuses on has-been 90s sitcom star BoJack Horseman, a literal horse. The show was marketed as a straight comedy, but anyone who has seen the first season all the way through knows that it has way more layers than that.

Of course, now that you’ve spent the weekend binge watching BoJack Horseman season two, dealing with the harsh truths found in certain episodes (man, episode seven, am I right?), you have time on your hands waiting for season three. I’m here to give you some comic book recommendations featuring largely self-destructive protagonists set in bizarre alternate universes. Comic books — they’re like cartoons, but your eyes move instead of the pictures!


Do you like smoking, drinking, down-on-their-luck anthropomorphic protagonists? If you’re checking out this list, you probably do. Howard the Duck has been around since 1973, but my recommendation is the current Howard the Duck series drawn by Joe Quinones and written by Chip “I draw Sex Criminals” Zdarsky. Not only do we get to see Howard as a semi-successful private eye (truly the role he was made for), but we also get tons of cameos from other Marvel characters and tongue-in-cheek comic references sprinkled throughout the issues. This is arguably the most laugh out loud book on this list. The first plotline involves him meeting Rocket Raccoon in space prison and later getting robbed by Aunt May — it’s just one of those books you need to read for yourself. The trade is out this fall, but the series is only four issues in, so you can catch up with individual issues easily.

The Scott Pilgrim Series by Bryan Lee O’Malley
Bass player and jobless 20-something Scott Pilgrim does a lot of stupid things in the six books that make up his story. The very first page of the first book tells us that he’s dating a high schooler. Then he starts dating another girl before he breaks up with that same high schooler. Beyond that, Scott Pilgrim takes the people (in particular, the women) in his life for granted and sees himself as the hero of his own story. Like BoJack, Scott ultimately has to come to terms with the fact that he might not be the good guy after all. Beyond the journey of the main character, the Scott Pilgrim series is also a bizarre universe with super-powered vegans, a subspace highway used to deliver online purchases, and plenty of in-jokes for video game fans.

The Stack Newsletter
Sign up to The Stack to receive Book Riot Comic's best posts, picked for you.
Thank you for signing up! Keep an eye on your inbox.
By signing up you agree to our terms of use
The Unwritten is about Tom Taylor, the son of a beloved YA fantasy novelist. In a very Milne move, said novelist father named the protagonist of his series Tommy Taylor. Once the series had become hyper-popular, Wilson completely disappeared and presumably died, leaving his son with the burden of that name. A good core of the first volume is adult Tom’s bitterness at his only claim to fame. He’s tried to act and model, to find some benefit out of the decades-long publicity, but has ended up in the convention circuit hawking his father’s books. Now, the series gets weirder and weirder as the story unfolds — it turns out that Tom himself may actually have a fated destiny as he learns about the magical properties of books and a secret organization out to get him — but Volume 1 gives you the self-deprecation and desperation of a famous person who feels trapped in the box of their own B-Listness.

Darwin Carmichael is Going to Hell by Sophie Goldstein and Jenn Jordan
Imagine a world where karma is not only real but as quantifiable as your credit score. Thanks to one stupid but dire mistake years ago, Darwin Carmichael’s karma is essentially tanked. And if your credit is tanked, you’re going to go to hell. Running as a webcomic from 2009 to 2013, Darwin Carmichael is Going to Hell tells the story of a guy with the worst luck. Yes, Darwin has been trying for years to raise his karma, but it’s hard to stay positive while working at a soul crushing desk job and living in gentrified Brooklyn. For fans of BoJack Horseman‘s weird world building, Darwin also lives in a world where talking manticores make adorable pets, minotaurs can be landlords, and angels smoke pot.


This last recommendation is my wildcard of the list. After all, Darkwing Duck (like the show it’s adapted from) is all-ages fare and way different in tone from BoJack Horseman. However, it is about a world full of anthropomorphic animals and features a single dad raising an orphan while wacky shenanigans happen. Add in that this comic is based on a show from the 90s and this is essentially the comic book recommendation for all of you who loved Horsin’ Around (the show within the show) but wished it had more crime fighting in it. And the Darkwing Duck: The Definitively Dangerous Edition omnibus just came out earlier this year!