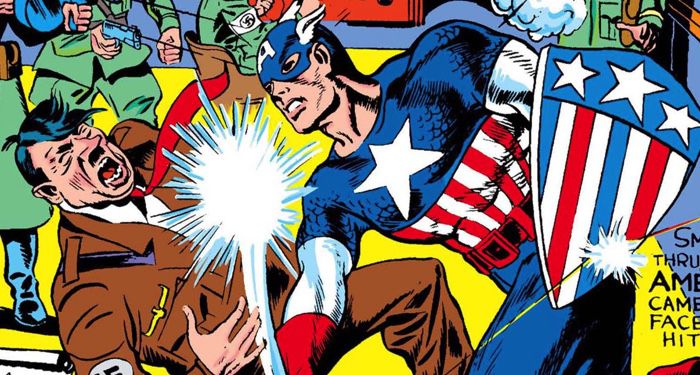 A few months ago, I took a hard look at some of the so-called “doctors” in comics (Doctor Fate, Doctor Strange…) to see if any of them actually had earned that title. This time, we’re looking at the captains, from America to Ultra. Did any of these comic book captains actually earn the rank? Let’s put them to the test!

Before I reveal the answers, take a minute to place your bets: real captain or fake captain?

After the Super Soldier Serum successfully transformed Steve Rogers into the U.S. army’s ultimate weapon, he was given the title “Captain America”…but Steve Rogers was still just a private. Did that make him a private pretending to be a captain, or a captain pretending to be a private? Add on all the times he’s flounced out of the army, been stripped of his rank, worked for other government organizations, and died, and I doubt even Steve knows what rank he technically holds. But everyone treats him like a captain (albeit usually one with zero military responsibilities…), so who am I to gainsay them?

Marvel hero Brain Braddock was a civilian who was granted his powers by the wizard Merlin, so…no. Although he is pretty posh, so I suppose it’s possible that he’s the captain of, like, a polo team or something. But probably not.

In his civilian identity, DC hero Rodney Rabbit is not a captain, but a comic book writer-artist, who gains his powers by eating irradiated “cosmic carrots.” He’s also a talking rabbit. You probably figured that part out already.

Len Snart is one of the best Flash rogues out there, and certainly the one with the best civilian name, but a captain he is not, in any sense of the word. He’s just a gimmicky bank robber.

Like his fellow Flash rogue Captain Cold, Digger Harkness is just a gimmicky bank robber (90% of Flash villains are gimmicky bank robbers; the rest are Professor Zoom (not a real professor) and a gorilla). His son Owen, who briefly took over the role, is also not a captain.

Finally, DC comes through! Air Force Captain Nathaniel Adam was court martialed for a crime he didn’t commit and, as an alternative to execution, voluntold to participate in a risky experiment involving an alien spaceship. The experiment didn’t kill him, but it did quantum leap him several decades into the future and grant him superpowers. Since Nate had never been pardoned for his (fake) treason, the Air Force then blackmailed him into serving as their pet superhero, Captain Atom. Nate has pretty much never had a good time in his life, but he is a real captain.

VERDICT: FAKE CAPTAIN, EXCEPT SOMETIMES NOT

This Marvel character isn’t actually one person, but the result of an extra-dimensional force called the Uni-Power possessing an individual, thus temporarily transforming them into Captain Universe. The first human Captain Universe was a real captain, an astronaut named Ray Coffin, but the Uni-Power has also empowered Spider-Man, a Doombot, a toddler, and a dog, so clearly whether or not its host is a captain of any kind isn’t exactly a priority.

Captain Ultra was created as a joke villain who, despite a severe fear of fire, auditions for a chance to fight the Fantastic Four. You know, the team that includes a man who can light himself on fire? Ultra isn’t exactly the brightest, is my point here. He is also a plumber, so yeah, fake captain.

The DC version of this hero, who now goes by Shazam, is in reality a child named Billy Batson, who turns into an adult superhero by shouting a magic word. I guess technically he could be the captain of, like, his middle school’s softball team or something, but I’m putting this one down on the fake side.

Seven different Marvel characters have used the codename “Captain Marvel,” but two of the most important have been real captains. The original, Mar-Vell, was a Kree who held that rank on his home planet. His immediate successor, Monica Rambeau, was a cargo ship captain as part of her role as a lieutenant in the New Orleans harbor patrol. The current Captain Marvel, Carol Danvers, was a colonel before she left the Air Force, so technically she outranks herself. The other four include an ensign, a confused Skrull spy, and two nepotism hires, so it’s sort of a mixed bag here.

How did you do? I for one am disappointed in the integrity of most comic book captains. For shame! It’s like you can’t even trust assorted bank robbers in spandex anymore.

If you want to put your comics know-how to the test a bit more, go back and see how you do on Real Doctor or Fake Doctor!